An American Astronaut performs in anticipation of EP release 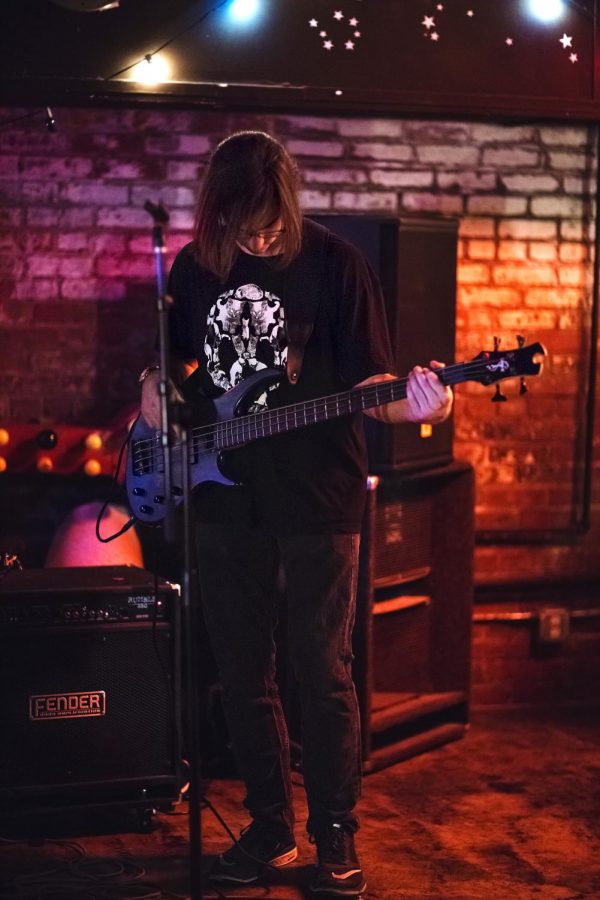 An American Astronaut performed at WRUW's Live in Lakewood festival on April 5. Their EP is due this summer.

For a chance at a once-in-a-lifetime opportunity to connect with a group of people on every possible level, one might be willing to make the trek evoked by Vanessa Carlton’s 2001 iconic one-hit wonder. Distance overcome is only one testament to this band’s dedication in their musical endeavours, since one band member lives a thousand miles away.

Together only a year, they show ample discipline—infused with a load of laughs—with results forthcoming. Breaking ground on March 29, Cleveland’s lounge-punk band, An American Astronaut, is in the midst of recording their debut EP, set for release this summer. They also performed at WRUW’s Live from Lakewood festival on April 5.

“We’re being very careful about what we put out right now because we don’t want to jump the gun on anything. We’ve tried to record things, but if it’s not hot, we won’t put it out,” frontman Mason Mocho said.

Refining their sound and buffing out the kinks, the band is taking to the studio with six finished songs, having scrapped many of them, ready to get them “mixed and mastered.” They are shooting for a summer release date, accompanied by local shows and a small tour of the New England area.

“We’re making pop music right now, stuff that’s easily digestible for the listeners,” drummer Jacob Wulf said. “In the future, I think we’d like to make something that you have to sit down and chew on a bit before you can really let it sit in your tummy—if that metaphor worked. Hopefully in the future, we can get really weird with it, but right now we just want something palpable for the nice people at home to listen to.”

They enjoy making and performing their noise-pop tracks for the time being, since identifying as a boy band lets them pull from each member’s background—musical and otherwise—and allows them to capitalize on their individual strengths. Their vastly different tastes also help promote a system of checks and balances within the band. Sharing creative control, they’re learning the art of the compromise to bring forth a “single vision.”

“It’s almost like our limitation is that we have all these creative forces going on, and there’s no one singularity,” guitarist and dark horse of the band Hayden Frosti said. “I believe we’re all on a different musical journey, but the goal is to become something we couldn’t have been on our own.”
Experience is operative to execution for An American Astronaut. They put a lot of emphasis on turning their shows into a production, inviting the audience to join them on the emotional rollercoaster that they are riding through the performance.

“When we all started, we didn’t believe how far we could get,” Frosti said. “Music is about getting a vision out of your head. When we practice, we’re practicing to become a medium for our vision until that becomes reality.”

An American Astronaut is planning a tour for the late summer season after the release of their EP, but if you missed them at Live from Lakewood, you can catch them live on May 17 when they open for Pink Mexico at Beachland Ballroom and Tavern.