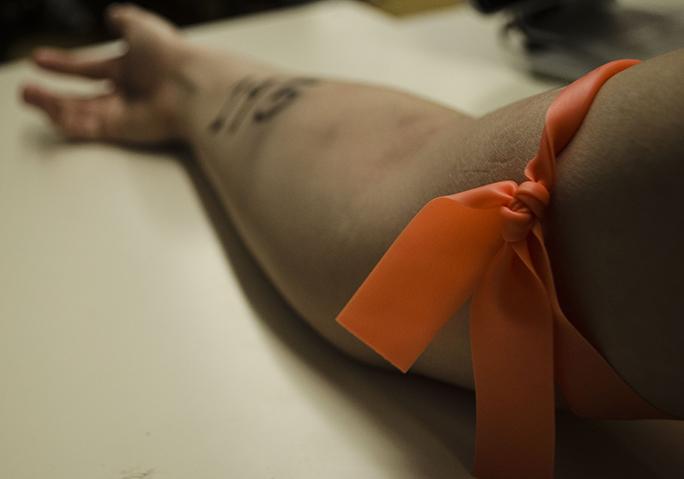 It’s strange to hear someone say that nearly 40 deaths from heroin overdoses in three months is an encouraging figure, but to medical examiner Dr. Thomas Gilson, it is. This morbid statistic represents a downward trend for the killer drug, which has been digging its heels into Cleveland since 2006.

In 2013, heroin overdoses killed 195 people in Cuyahoga County, almost doubling the homicide death toll and shattering 2012’s record of 161 overdoses. In another darkly enthusiastic statistic, though, the rate of increase declined. The year 2012 experienced a 50 percent increase from 2011, while in 2013 the deaths only rose by 21 percent. Still, a decrease in fatalities are what the county needs to see, not a slower rise.

So, how does the county make that into a reality? According to Cuyahoga County executive Ed FitzGerald, the most important piece of the puzzle is public awareness. In a speech on April 20, FitzGerald announced his plans to put a new protocol in place, which would include making the site of an overdose into a crime scene and tougher prosecution in criminal cases, especially for drug dealers.

“There is still a lot of work to be done,” said Fitzgerald. “We don’t have any time for complacency.”

Heroin use isn’t a new issue for Cuyahoga County, and there are many treatment options currently available. One of them, the Free Medical Clinic of Greater Cleveland, can be found only a few minutes away from the Case Western Reserve University campus, just past the Euclid-East 120th RTA station.

The Free Clinic has pioneered two innovative techniques to prevent deaths caused by heroin overdoses. Unlike most programs, Project DAWN (Deaths Avoided with Naloxone) and the syringe exchange program focus on safety, rather than rehabilitation.

Project DAWN focuses on the last aspect: overdose prevention. The program educates community members on how to recognize the signs of an overdose. It also provides naloxone, a drug used by medics to reverse the effects of an opiate on the body, in the form of a nasal spray to those at risk of overdosing. Now, with the passage of Ohio House Bill 170, naloxone can also be provided to a third party that believes he or she will possibly have to use it on a friend or family member.

The Free Clinic’s efforts aren’t without critics. Some people question giving an antidote for heroin overdose to addicts, but, as Dr. Papp points out, to receive treatment, users must survive their addiction.

Project DAWN is ensuring this happens, and the number of people they help is increasing. Dr. Papp estimates they help six to eight people a day, and, as more community members begin to trust the program, more people are beginning to come in. Dr. Papp says that the program resulted in 32 reversed overdoses in 2013, a strong measure of the program’s success.

Another program that the Free Clinic offers is the Syringe Exchange Program. Designed as a precaution against the human immunodeficiency virus, it allows people to exchange their dirty syringes for clean ones. No one can be arrested within a 200-yard radius of the exchange site.

Critics question the wisdom of providing drug users with clean needles. As Nick Stephens, a substance abuse counselor at the Free Clinic, said, “[It’s] a weird thing because logically you’re saying, why would you give a drug addict brand new syringes?”

However, Stephens also points out that not only does the program prevent diseases, but it is also a good tool for outreach. Workers and volunteers develop relationships with addicts by talking to them. After developing trust, they can offer to help the users get treatment for their addiction, as well as sign them up for Medicare.

The Free Clinic also offers more traditional methods of treatment, including group and individual counseling. The amount of therapy required is dependent on the intensiveness of treatment.

The Free Clinic continues to check in on patients in 30-day intervals, even after they leave therapy. Stephens estimates a 75 percent or 80 percent success rate for the program, and says that staying in contact with former patients throughout the check-up process helps to facilitate the program’s success.

He also explains that relapse is not uncommon, and that it’s a part of the recovery process. In fact, he estimates that 50 percent, if not higher, of patients relapse, but this doesn’t mean they won’t recover.

With the expansion of the Free Clinic’s and other organizations’ programs, in collaboration with FitzGerald’s new protocol, the county may have hope in what, until now, has seemed like an uphill battle. Gilson’s nearly 40 deaths marks the lowest deaths per quarter since 2011, and, hopefully, the downward trend will continue.