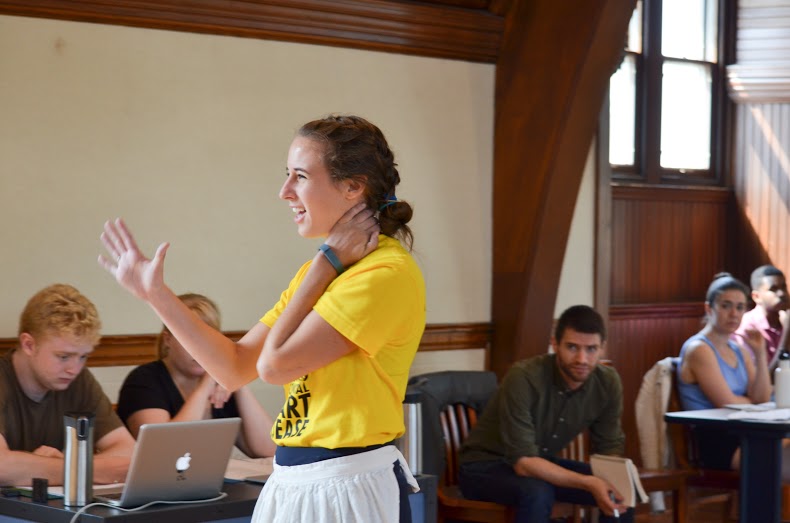 Paige Klopfenstein rehearses for her role as “Edna” as director Tim Koch looks on.

I’m going to be honest: Even though I am a self-proclaimed patron of the arts, I haven’t actually seen a show at Eldred in a while.

I know, on-campus theatre is easily accessible to students, and yes, the prices are quite affordable. However, I find that I am always swamped with homework or dashing to and from meetings, mixers and social events.

I know that there are many of you who are just like me—you want to watch a good play, see a fun musical or listen to some quality live music, but you just cannot find the time.

Well, we’re in luck, fellow arts-loving Spartans. Eldred’s latest play, “Waiting For Lefty,” debuts on Oct. 3 and closes on Oct. 12. If you are like me, and you are constantly making excuses for why you are not as involved with the arts on campus, I have comprised a list of reasons why you should make your way down to Eldred for this play:

1. “Waiting For Lefty” was directed and designed by Case Western Reserve University alumni.
Director Timothy Koch (CWRU ’08) and scenic designer Cassie Dorland (CWRU ’10) have returned to our beloved campus after spending some time working on different individual projects in cities like Los Angeles and New York City, and they have brought with them new insights and skills.
Once upon a time, they endured the horrid hell weeks before midterms and finals, they stayed up all night writing papers, they lived in the campus dorms and they experienced CWRU and all it has to offer.
However, they decided to return to the campus that prepared them for their careers in theater, and that speaks volumes about our CWRU community. Go and see the show because you will be further supporting CWRU alumni who were once in your shoes—people who did it all before you and came back to tell the tale. How cool is that?

2. The plot is riveting.
If you’re a history buff like me, this is the show for you. “Waiting for Lefty” is set in 1935 and revolves around a group of dissatisfied cab drivers; the storyline is comprised of seven vignettes related to a meeting where the cab drivers decide to strike.
The script tells the stories of six drivers who come from varying backgrounds but have one thing in common: They were all forced into the job because of economic decline. Come to the play to join in on the meeting and find out what led each cab driver to go on strike…and who Lefty is.

3. “Waiting For Lefty” has some themes that are still relevant.
Koch summarizes the main theme of the play clearly: “There’s an exploitive economic cycle. Coming out of college, students have massive debts, and we have all felt exploited by the system. This play is about waking up to a system every day and having the odds stacked against you.”
Dorland adds that “students need internships to get experience, but those internships often treat students unfairly” and “the power structure takes advantage of young workers.”
Sure, none of us CWRU students were taxicab drivers during the Great Depression, but we’ve all felt discouraged by a system that seems to be holding us down. We have all experienced—or will soon experience—unfair wages in industry-based jobs, student debt and discouragement as we try to forge our own paths. Although “Waiting For Lefty” is set in 1935, come to the show for insightful, relatable content.

4. You’ll have fun.
The bottom line is this: Theatre is fun. Nothing is better than having a story told right in front of your eyes. There is just something magical about how a small group of people can take some lines off a page and bring them to life right in front of you.
Actress Paige Klopfenstein, who plays the role of Edna, believes her role goes beyond her stage presence. “I have the opportunity to bring someone who only exists in words to life. By giving the character life, I’m able to touch other lives,” said Klopfenstein.
Come for an intellectually stimulating, yet fun night. Actor Jason Sleisenger, who portrays the role of taxi driver Sid, says the play will reveal that “imaginary situations that are based in truth can be so powerful.”

Mostly though, come and see the show because it won’t be your typical weekend entertainment.

“These days theatre can seem antiquated and outdated…come to the show and see why humanity continues to express itself and examine itself through theatre,” said Koch. “Slow down, listen and participate. Experience someone else’s story and experience yourself in that story.”