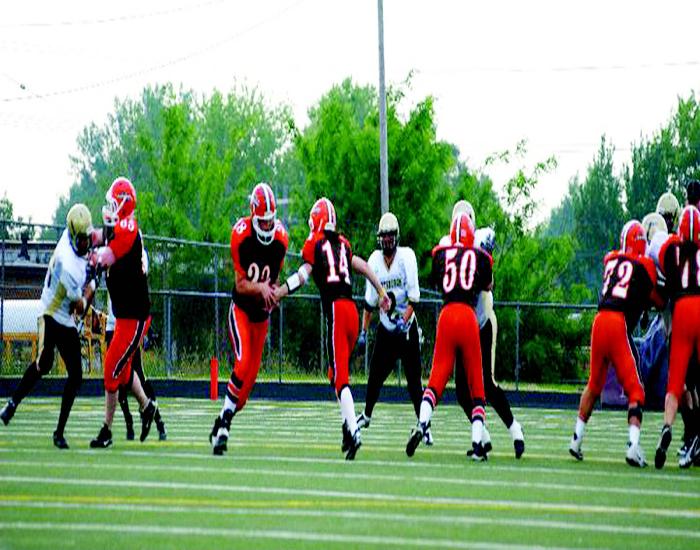 The Cleveland Fusion women’s tackle football team has added many CWRU alumni this year, including head coach Erik Keister (BS, chemical engineering, 2002, MEM 2003), who played linebacker for the Spartans from 1998 to 2001 and coached from 2002-2003.

The Fusion are part of the Women’s Football Alliance (WFA), a full-contact league that started in 2009. In three years the league has grown rapidly to over 60 teams. The Cleveland franchise has been around since 2002 as part of the National Women’s Football Association and joined the Alliance in 2009 as part of Division 4 of the National Conference. This division also includes the Detroit Dark Angels and the Pittsburgh Force.

Cleveland has been one of the region’s top teams since 2002. Since joining the WFA, the Fusion have gone 4-4 in 2009, 6-2 in 2010, and 5-3 last year. Their 2010 record was good enough for a second-place finish in the National North Central Division where the Fusion earned a playoff berth but lost to the St. Louis Slam.

“I always enjoyed playing backyard football with my siblings growing up,” said CWRU alumna and quarterback Beth Andrasik (BS, mechanical and aerospace engineering, 2011). “The opportunity to be a part of a team and play seemed like a lot of fun to me.” Andrasik played softball and basketball at CWRU and is now a coach for the CWRU women’s softball team.

“I like hitting things,” quipped wide receiver Katie Green (BA, biology, 2011). Green played softball and soccer while at CWRU. Another CWRU alumna, Christy Conlin (LAW, 2009), plays the same position. Conlin had planned to play rugby for the Cleveland Iron Maidens, but “tried out for the Fusion instead because I wanted to try something new.”

Lineman Marie Vibbert (BA, English, 1998) joined the team three years ago and works for CWRU at MSASS. “Playing a sport at this level really pushes you. I thought I was too old to start something like this, but I’m not. You learn that you can do things you never thought you could.” She also added that “It’s great to see so many new players from my alma mater.”

The Cleveland Fusion plays Saturday nights at 7 p.m. at Byer’s Field, 7600 Day Drive in Parma. Their home opener is April 14 against the West Michigan Mayhem. On April 21 they play the Pittsburgh Force – always an intense matchup. The Fusion also have home games against the Chicago Force on May 19 and Detroit on June 9. More information can be found on their website.