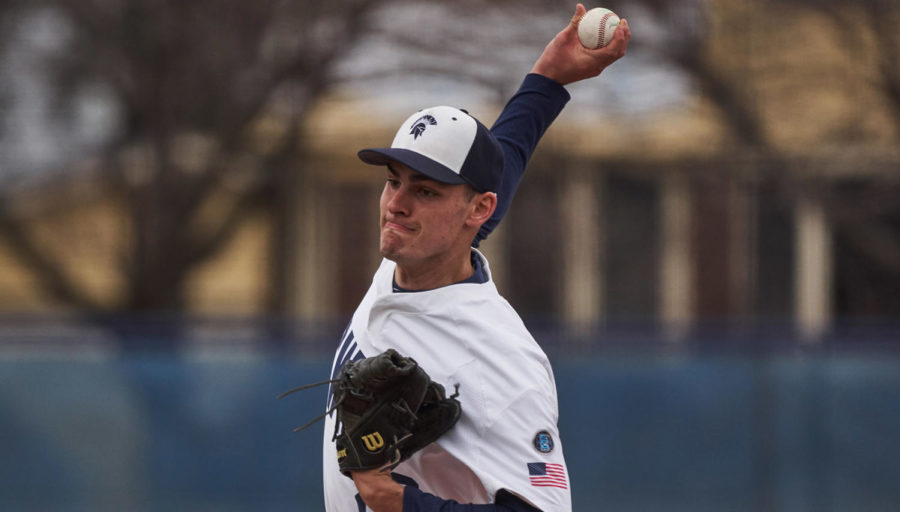 Fourth-year Willem Bouma (above) pitched in CWRU's decisive 12-3 defeat of Emory, delivering the Spartans the first UAA series of 2022.

This season has been anything but smooth sailing for the Case Western Reserve University baseball team. However, it seems as though they’ve righted the ship under head coach Matt Englander with a successful road trip to Atlanta against the Emory University Eagles last weekend. Though CWRU lost the first game 7-4, they bounced back with 5-4, 11-4 and 12-3 victories to close out the series on a high note and inch closer towards .500 on the season.

The Spartans got off to an excellent 3-0 start to the season, sweeping Washington & Jefferson and beating Mount Union 6-4 in extra innings. Unfortunately, CWRU hit a wall and lost six straight games. A mid-series 7-3 victory over SUNY Cortland ended the slide momentarily, but the Red Dragons dished out two more losses to close out the series in South Carolina. The following weekend, CWRU finished a four-game weekend against Denison University with 2 wins and 1 loss, with the third scheduled match postponed.

The 6-9 Spartans had their work cut out for them as they geared up for a weekend in Atlanta against the 13-8 Eagles, who were fresh off a series sweep at Oglethorpe University. The Friday game kicked off with 70 people in attendance and fourth-year pitcher Jack Moore taking the mound for Emory.

The first inning went by without much action, as the Spartans hitters grounded out twice and fouled out once while the Eagles’ leadoff hitter flied out and second-year Spartans pitcher Reece Marley mowed down the remaining two Eagles for strikeouts. In the second inning, third-year first baseman Nick Talarico walked and soon advanced to second on a single from third-year second baseman Trey Haley. Chaos ensued, as a throwing error by the Emory catcher sent Haley to second and Talarico to third. Haley then advanced to third and Talarico safely scored after another throwing error, this time by the Emory third baseman. After a strikeout, a fielder’s choice that got Haley out at home and a fly out, the Spartans finished the top of the second with a 1-0 lead.

The Eagles continued to struggle offensively, grounding out and flying out twice before CWRU got their next chance to bat. In the third inning, third-year catcher Jack Anderson walked and advanced to third on a single from first-year left fielder Logan Andreyko, but the Eagles quickly put a stop to the Spartans’ scoring effort. Emory evened the score with a double that led to a run off a wild pitch and ground ball, adding on a single before the inning ended.

The fourth inning was quiet, with only a walk for fourth-year Spartans center fielder Cole Jarrett and a single for Emory. The fifth inning saw another run for the Spartans, as they loaded the bases with help from a bunt from Anderson and scored on a fielder’s choice, with a pitching change in between for the Eagles. The home team had no answers in the bottom of the fifth, as a walk preceded a fly out and two strikeouts. A single from third-year right fielder Flynn Lenahan was the Spartans’ only hit of the sixth and the Eagles retaliated with full force. A walk, a wild pitch and an RBI double ended the day for Marley as second-year pitcher Tyler Horvath came in for relief. The Eagles capitalized on a fielding error with a two-run home run to give them a 5-2 lead at the end of six.

The Spartans had nothing going in the seventh while the Eagles tacked on another two-run home run as second-year pitcher Matthew DuBois came in for Horvath. The eighth was quiet for both teams, with the Eagles hitting a single. Though CWRU hit a double and sacrifice fly en route to scoring two more runs in the ninth, it wasn’t enough, and Emory won their first and last game of the weekend 7-4.

From there on, the Spartans ran the show.

Though Emory got in front early in Game 2 with an RBI single in the first, the Spartans put together a two-run effort in the top of the second thanks to singles from first-year catcher Jay Smith, designated hitter Tre Armstron and Haley, as well as a double from shortstop Jacob Lott. The third inning went well for both defenses, with Talarico as the only baserunner of the inning on a walk.

The fourth inning kept things close, as first-year center fielder Nick Harms crushed one for a solo home run and Lott singled, only for the Eagles to score on a fielder’s choice and keep their deficit at one. Unfortunately, the Spartans’ bats went cold in the fifth and Emory snatched a 4-3 lead with a two-run home run. Neither team had any luck in the sixth.

CWRU came surging back in the seventh, as Lott singled and later scored on an RBI double from Anderson, who in turn scored on an RBI grounder from second-year third baseman Zack Carinci. Though Emory loaded up the bases, the Spartans were able to hold onto the 5-4 lead for the rest of the game, keeping their opponents hitless in the last three frames to even the series at one win apiece. Horvath recorded his third save of the season, striking out 4 and allowing no hits or walks in 2 ⅓ innings.

Though the games and series had been fairly close at that point, CWRU closed the weekend with pure dominance. The Spartans began Game 3 as needed, as Andreyko doubled and scored on a Talarico single. Emory fought back with a two-run effort in the bottom of the second to take the lead, and while the third inning was quiet for both sides, CWRU outscored the Eagles 3-2 in the fourth. Carinci was hit by a pitch and Talarico singled. Both scored on a throwing error that got Anderson on base, which led to Anderson scoring on an RBI from Lenahan. However, the 2-RBI single from the Eagles tied the game up at 4. That run was the last the Eagles would see all game.

Carinci hit an RBI single in the fifth to bring in Lott and take the lead for the Spartans while the Eagles struck out twice and hit a pop up. The Spartans kept rolling in the sixth with a sacrifice fly RBI from Haley that scored Lenahan and an RBI double from Lott that brought in Harms, who doubled to get on base. While both teams went hitless in the seventh, the Spartans regained some steam in the eighth, piling on another 3 runs with an Armstrong single, a two-run home run from Harms, and doubles from Lott and Anderson. Carinci singled in the ninth and scored on a Talarico double as CWRU cruised to an 11-4 victory to take a 2-1 series lead. Third-year pitcher Sankalp Doshi sealed the win as he struck out 5 and allowed just 1 hit and 1 walk in 3 ⅓ innings. Finally, the last game of the series had arrived. The Eagles would have to either tie up the series or let the Spartans walk away with an overwhelming victory. Clearly the 11-4 beatdown the Spartans just handed out wasn’t enough for them to let out their frustrations for their struggles earlier in the season, as they demolished Emory 12-3 in the final game of the weekend.

Though things started off rocky for CWRU, their defense was able to keep Emory scoreless in the first. Unfortunately, Emory put together 2 RBI singles in the bottom of the second to get out in front 2-0. Anderson doubled in the third and Carinci hit an RBI single for an answer, but the Spartans still trailed by three.

Determined not to head back to Cleveland with a tied series, the Spartans found their rhythm in the fourth. Harms inevitably homered again and third-year left fielder Kevin Mackenzie, Lott and Anderson all singled. Mackenzie scored on a throwing error while Lott scored on a wild pitch. An RBI single from the Eagles in the fifth got them within one point, but the calm in the sixth came before the Spartan storm in the seventh.

The Spartans roared with a seven-run effort in the seventh to go up 11-3. Talarico doubled to score Andreyko, who reached first on a fielding error. Harms’ lethal plate appearances all weekend convinced the Eagles it was a safer bet to intentionally walk him. Third-year third baseman Owen Levinson hit an RBI single, as did Mackenzie. Haley hit an RBI double and Lott walked. Anderson walked with the bases loaded to score Mackenzie and Haley scored on a wild pitch. Carinci hit a sacrifice fly RBI to bring in Lott, and a pop up finally put the Eagles out of their misery.

Unfortunately for Emory, they had no answers for the late-game massacre. Harms doubled in the eighth and scored on a Mackenzie single to put the Spartans up 12-3 and effectively end the game, as both teams were fairly quiet in the ninth. Carinci took the mound at one point and picked up his third save of the year while DuBois recorded his first win of the season.

The 2022 season is looking up for Spartans baseball, as they improved to 9-10 with the successful road trip to Atlanta. Though they still have work to do on their overall record, their 3-1 conference record is tied with NYU for first in the UAA. For now, they can get comfortable in Cleveland with eight straight home games at Nobby’s Ballpark.

The Spartans spring back into action on April 1, beginning a 4-game weekend series against the 9-2 Brandeis Judges.