CWRU Class of 2018 takes on the ice bucket challenge 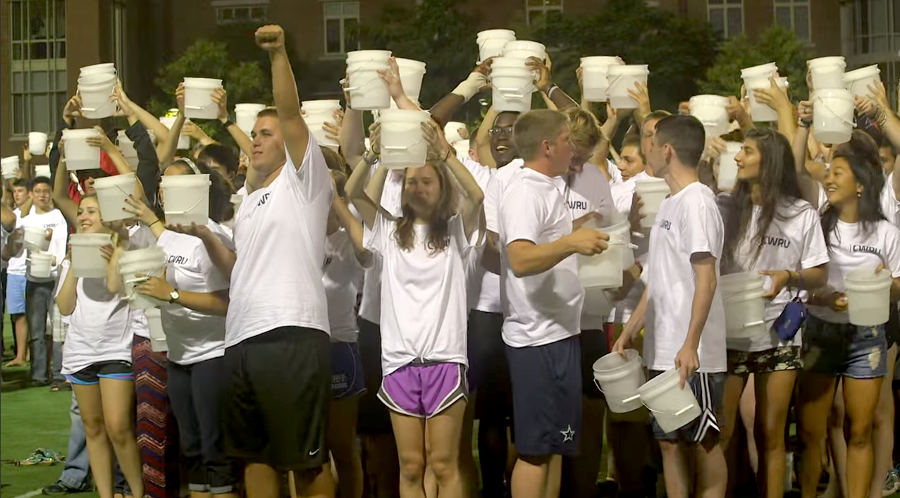 The CWRU class of 2018 ended their class picture on Aug. 19 a little differently than most, with all 1,275 students taking part in the ALS Ice Bucket Challenge.

The challenge, which has become increasingly popular on Facebook, raises awareness for amyotrophic lateral sclerosis (ALS), also known as Lou Gehrig’s disease. The challenge gives nominees 24 hours to dump a bucket of ice water on their head and/or donate $100 to the ALS Association.

ALS is a disease that severely damages nerve cells in the brain and the spinal cord. It affects an estimated 30,000 people in the USA.

Robert McCullough, director of undergraduate admissions, decided to bring the class together to do the challenge.

“ALS has hit people close to me, and it’s a scary and devastating disease,” he said. “A lot of people were interested in doing this—you can’t pull off a challenge of this scale in the amount of time we had to plan unless there’s broad enthusiasm and support.”

The Cleveland Bottle & Supply Co. sold the school buckets at a discount, while Olmstead Ice provided the ice. All of materials were loaded into trucks and delivered in less than six hours.

CWRU challenged their sports rival Carnegie Mellon, and their mascot, Scotty, accepted. He challenged Phil the Phoenix from the University of Chicago.

The rest of the university has also taken on the challenge, with the School of Dental Medicine, the CWRU Police Department, the entire 121 Fitness staff and the Department of Physical Education also completing it.

Many celebrities have also taken the challenge, including Lady Gaga, Ben Affleck, Oprah Winfrey and George Bush. The challenge was originally inspired by Peter Frates, a 29-year-old former Boston College baseball player who was diagnosed with ALS in March of 2012.

So far, the challenge has raised $53.3 million towards funding research for treatments and the search for a cure.

According to McCullough, CWRU did not make a donation after completing the challenge.

“It can be challenging for the university to make a donation directly, because of so many other deserving causes and because of where the University’s revenue comes from, but what we can do is use the resources we have to spark support from members of our community,” he said.