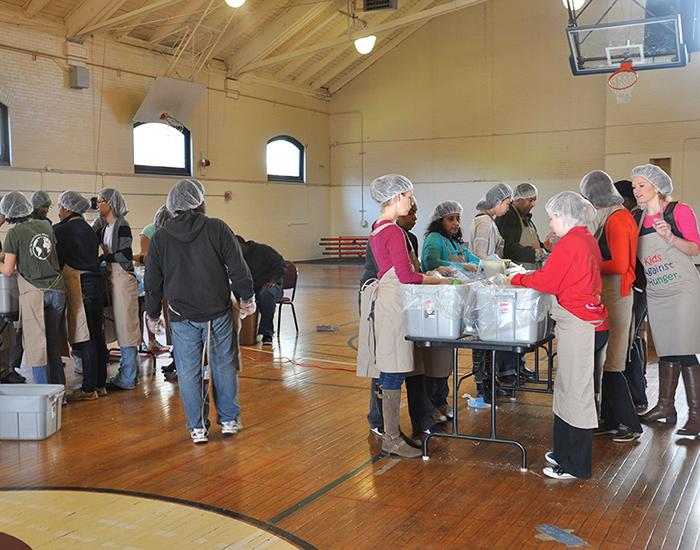 Case Western Reserve University has a strong reputation for implementing and supporting community service events on campus and throughout Cleveland. CWRU exemplified this tradition during last week’s Fall Saturday of Service.

On Saturday, Nov. 10th, CWRU students participated in the Fall Saturday of Service. The event was planned by the Center for Civic Engagement and Learning (CCEL), the Office of Greek Life, and Kids Against Hunger.

“This year’s Saturday of Service was especially successful because of the collaboration between different campus groups. CCEL, the Interfraternity Congress and Panhellenic Council, and Kids Against Hunger worked collaboratively to coordinate the projects and recruit the volunteers,” said CCEL student service coordinator Angela Lowery.

Students had the opportunity to volunteer for various projects, including cleaning up the Ronald McDonald House, organizing donations for refugee families, and volunteering at the University Farm. CCEL also hosted a blood drive during the event because the devastating effects of Hurricane Sandy caused a widespread blood shortage.

Kids Against Hunger founder and member Aditya Rengaswamy said the event was successful.

“Over 100 volunteers packed close to 25,000 meals for Cleveland during our event,” Rengaswamy said. “Because of service, we can engage people with our hearts and minds, and create a true impact.”

CWRU undergraduate Nate Leclerc also participated in the day of service. “I helped plant crops in the community greenhouse,” he said. “It felt good to give back to the community and serve.”

Lowery also agreed that this year’s Fall Saturday of Service was successful.

“Overall, we had approximately 275 volunteers contribute over 900 service hours to local nonprofits throughout the Cleveland community,” said Lowery.