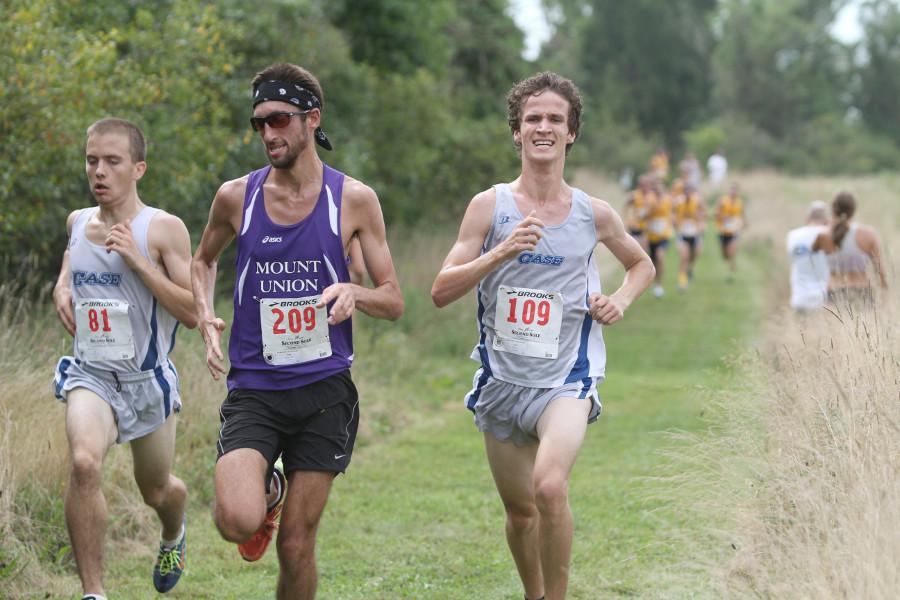 Spartan runners give it their all down the stretch last season. The Spartans will rely on a “next-man-up” mentality this season.

Coming off top 10 finishes last season, Case Western Reserve University’s men’s and women’s cross-country teams look to move up the ladder in the NCAA DIII Great Lakes Region. Cross-country coaches Kathy Lanese and Mark Berton will likely continue to utilize a group running strategy with both teams during races. Losing only a few runners, this pack racing should prove successful in a stacked region.

With an individual trip to nationals under her belt, senior Kelsey Aamoth hopes to lead the entire women’s team to nationals this season. Last year, the women’s team finished fifth out of 25 at regionals, only 31 points out of third place and three spots from qualifying for nationals. “We are thinking big,” said Lanese about this upcoming season. “A hopeful birth to the NCAA championship, which has not occurred for both teams concurrently since 2008.”

The team also comes back with a strong and experienced top end of four seniors, all owning a personal record under 23 minutes for six km, which is below a ridiculous 6:10 mile pace.

Although the team finished strong in 2014, the backend of the varsity team will need to help mitigate the loss of graduate and all-region runner Kristen Ruckstuhl. Specifically, the team depends on sophomores Danielle Kulpins and Hayley Yocum to build off impressive sub-24 six km showings during their freshman years. The improvement of these younger runners will be crucial to strengthening the back of the top seven that was a bit distant from the top five last season.

Similar to the women’s team, the men’s cross-country team lost little talent and expect to improve. Last year, the men’s team owned one of the lowest spreads in the Great Lakes Region with only 35 seconds separating the first and seventh runner. This togetherness and experience should propel the team to a stronger finish this season.

After finishing ninth at regionals last year, the team includes a top seven identical to last season. “I have 100 percent of my team returning this year. We are very senior strong,” said Lanese.

Along with four of experienced seniors Chippy Kennedy, Ben Davis, Tony Spalding, Tim Travitz, this seven includes a group of three younger runners who should improve significantly and strengthen the core of the team. The five runners that scored at regionals last year stuck together, all finishing below 26 minutes for their 8 km. If the team maintains their chemistry and packed running, they should improve significantly in the Great Lakes Region.

In her 15th year of coaching, Lanese might have one of her strongest teams yet. “I have the most dedicated teams that I’ve had in years,” she said.

Kicking off with a home meet, the Spartans will run their first race at the Sudeck Stampede at Squire Valleevue Farm, where both the men and women crushed John Carroll last season.