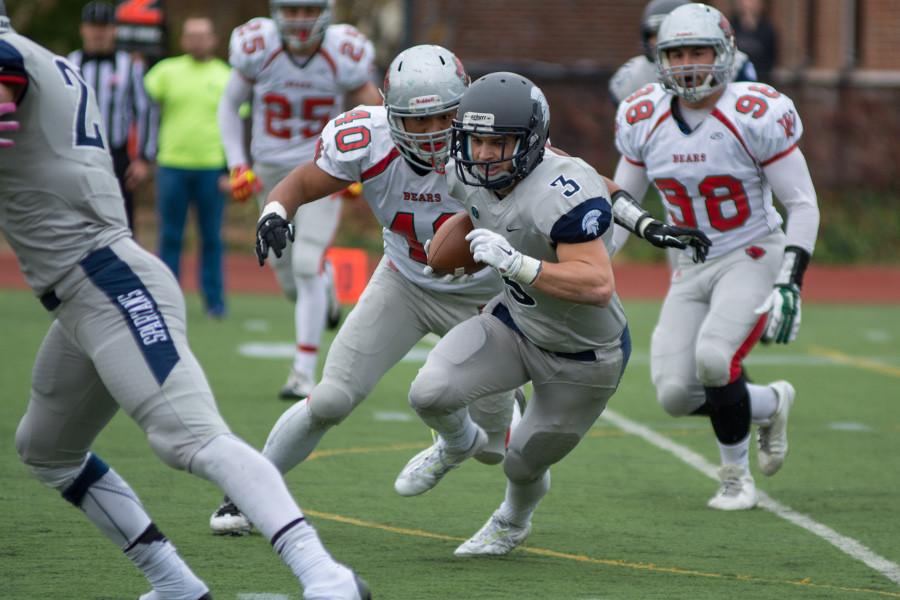 Football finished their season on the road against arch-rival Carnegie Mellon. The Spartans lost the game, falling to 7-3 on the season and will look to build upon their success next year.

The season ended in a very uncharacteristic way for the Spartans, who for the first time all year lost their second straight game.

The Spartans, who were ranked 22nd heading into the final week of play, were on the road to close out the 2015 campaign as they fell to arch-rival Carnegie Mellon University (CMU) by a score of 52-42. With the loss the Spartans lost both the 30th Academic Bowl but also any share of the University Athletic Association (UAA) football title.

The Spartans were playing catch up all game and were unable to do so, never holding the lead over the Tartans, another unusual thing for the Spartans. CMU scored on their first possession, needing a mere six plays to move up the field for 79 yards and seven points on the board.

On their first possession of the game the Spartans were unable to have the same success, forced to punt it away after a failed 13-yard third down conversion at the Tartan 45-yard line. The resultant punt was fumbled by the Tartans and recovered by the Spartans’ own second-year strong safety Cody Calhoun on the 10-yard line. This lucky break set up a 10-yard run by second-year quarterback Rob Cuda to tie the game at seven apiece with a lot of football left to play.

The Tartans’ kicker missed a 33-yard attempt wide right to end the Tartans ensuing drive which allowed the Spartans to take over, a drive which was wasted after failing to convert on fourth and seven at the 34-yard line, a risky move which didn’t pay off. This turnover on downs allowed the setup of a 43-yard touchdown pass for the Tartans as they retook the lead, 14-7, with 3:19 left in the first quarter.

The Spartans closed that gap with a defensive score when the fourth-year CMU quarterback Andrew Hearon was picked off by fourth-year inside linebacker Aaron Weisberg at the 29 yard line. Weisberg returned the ball for the touchdown.

The Spartans fell behind in the second quarter when they allowed the Tartans two consecutive touchdowns, finding themselves down 28-14 with a mere 4:09 left in the half. CWRU looked primed to start the comeback when they scored with 1:48 left on the clock only to have second-year kicker Ben Carniol’s extra point blocked. The Spartans were therefore forced to settle for six points and had all momentum sucked out of their play heading into the locker room for the half.

The Spartans came out for the second half reenergized but saw an interception by CMU turn into yet another touchdown for the Tartans, putting the Spartans further in the hole. The pick was Cuda’s fifth in the season, after having not thrown a single pick in the first seven games of the season. The Spartans were able to answer with a touchdown of their own, but the third quarter saw the two teams trade back and forth another pair of touchdowns to leave the Spartans’ deficit the same.

The Spartans looked to come back when they managed to score in the fourth quarter and complete the two-point conversion. However the Spartan defense was unable to hold back the continuing push of the Tartan offense and gave up another 10 points in the final quarter of play, with CMU kicking a field goal to make the lead 10 points with only 1:46 left to play.

Cuda led the Spartans down to the one-yard line but was unable to get the ball into the end zone, with the Tartan defense providing the final nail in CWRU’s coffin. As a result the Spartans were sent home without the Academic Bowl and with a 52-42 final.

The game was the most points scored between the two teams since the first year of the Academic Bowl, as the two squads combined for 94 points. Despite the loss and the losing streak to close out the season, the Spartans still had a strong 2015 campaign and were a huge improvement on last year’s squad.

As such the team was rewarded by 20 All-PAC team nominations. Of those 20 players four earned first team nods; fourth-year students Ethan Albers and Gavin Sandidge, and second-year students Gage Blair and Cuda.

Albers played tight end for all 10 games this season, catching 29 passes for 576 yards. Albers also added five touchdowns and his 19.86 yards per catch placed him 32nd in Divison III.

Cuda, who was also named PAC Offensive Player of the Week three times this season, led the PAC in touchdowns with 28, was responsible for 21.6 points a game and posted 2,631 yards in the air. Cuda, who embodies the modern running quarterback, also led the Spartans in rushing the ball with 715 yards and another eight touchdowns on the season.

On the defensive side of the ball, Sandidge, who started at linebacker, led all Spartans with 60 tackles on the season, with two of those for negative yards. He also added a fumble recovery and an interception to help the Spartans to victory.

Finally Blair started all 10 games at center for the Spartans, helping hold down an offensive line which allowed for 4,684 yards of offense on the season.

In all, the Spartans earned a high level of success that they will look to build upon next season as they look to take the PAC and UAA championships, and make it into the NCAA championship.