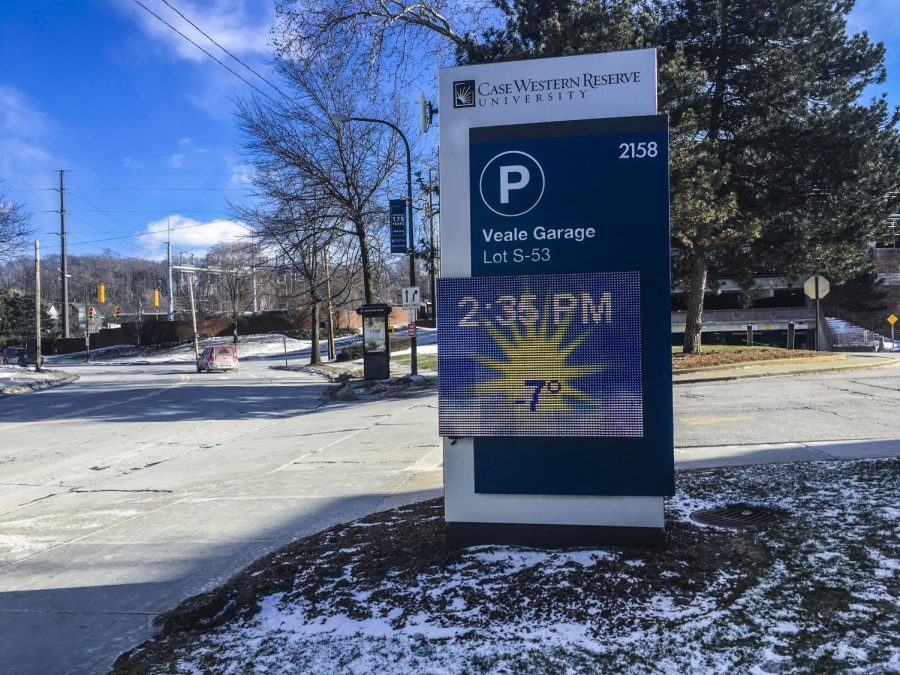 The temperature on CWRU campus on Wednesday, Jan. 30

In an article in The Daily on Jan. 29, Case Western Reserve University announced it would be closing campus from 7 p.m. Jan. 29 to 7 p.m. Jan. 31 due to inclement weather. The polar vortex sweeping through the Midwest hit Cleveland with temperatures reaching a low of 4 below zero.

The university’s decision to cancel classes and close for two days can be attributed to a concern for student’s safety. A warning from the National Weather Service alerted CWRU to the life threatening risks the temperatures in Cleveland could cause. “With wind chills that low, frostbite can occur in 10 minutes,” stated The Daily, cautioning those who must  go outside to “dress as warmly as possible, wearing multiple layers and covering all exposed skin.”

However, a decision to shut down the University does not come lightly, said a University spokesperson to The Observer, “Decisions regarding weather-related schedule changes—delayed opening, early dismissals, closures, etc.—involve conversations among the leaders of several university offices (or, if a particular person is unavailable, a designate).” These conversations are comprised of “representatives responsible for such areas as public safety, buildings and grounds and human resources. The provost is present as the university’s leader for academic and student affairs, and the president leads the conversation.”

The University spokesperson emphasized the consideration that went into making decisions about cancelling classes, as these cancellations interrupt teaching and research. “This emphasis on continuing activities that directly advance the university’s mission is one of the reasons that leaders sometimes must wait until morning to determine whether to delay or cancel classes. On occasion forecasts of heavy snow prove unfounded, so leaders want to hear reports regarding the actual conditions that morning before making a final call. In those sorts of instances, the conversations take place about 5:30 a.m. The final deciding factor is always, always safety.”

When making the decision to cancel classes for this past week, the spokesperson elaborated that “the approaching front not only was long forecast, but reinforced by developments in places like Minnesota and Wisconsin on Sunday and Monday. Case Western Reserve’s weather leadership group first met early on Monday evening [Jan. 28], with a consensus quickly reached that at the least, classes would need to be canceled Wednesday. Given that the front was not expected to arrive until Tuesday evening, however, the group elected to meet again Tuesday morning before making a final decision.”

The representatives monitored weather forecasts from the area, and made sure they were up to date on all developments before they released a statement. In particular, they watched the actions that institutions similarly affected by the weather took. By Tuesday it was clear that “broad agreement existed regarding the need to close the University Wednesday and delay opening Thursday. In reviewing updated forecasts—for example, overnight the National Weather Service’s wind chill warning for Thursday—previously scheduled to end at 1 p.m.—now was due to lift at 4 p.m. With that development, and in light of the severe risk these temperatures posed, the group elected to extend the closure until 7 p.m. Thursday. In the event the front truly had passed through the area by then, at least the possibility would exist of still being able to hold evening classes on Thursday.” However, it is important to note that ultimately “the final decision regarding evening and weekend activities within schools—classes or events—rests with the deans of those schools.”

In short, the dangerous weather conditions hitting Cleveland required careful consideration from several university offices to make the decision best for the well-being of the students and staff who would be on campus. With single-digit high temperatures Wednesday and Thursday, and windchill in the negatives, safety was paramount.