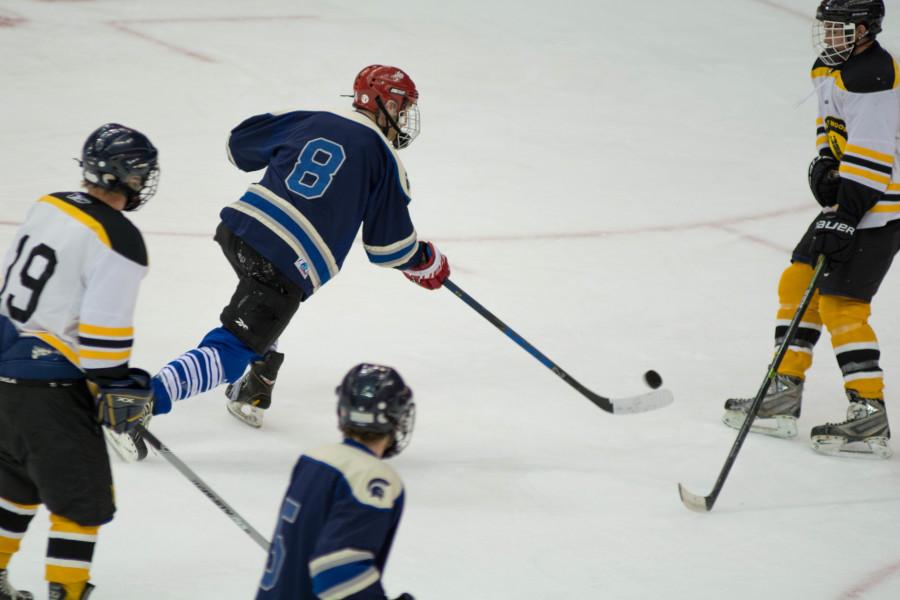 The CWRU Hockey team took on the College of Wooster last Saturday on the Lake Erie Monster’s home ice at the Q. The Spartans won a hard fought game 8-4.

While the Case Western Reserve University campus lacks an ice rink, that doesn’t stop the Spartans from putting together an extremely talented ice hockey team or a dedicated fan base. This talent was on full display this past weekend as the Spartans took down the visiting College of Wooster on the grandest of arenas.

The Spartans and the Wooster Fighting Scots took to the ice on Halloween afternoon to battle it out on the home ice of the Lake Erie Monsters at the Quicken Loans Arena in downtown Cleveland. The Spartans played to their advantage and brought home a win, sending the Fighting Scots home with an 8-4 loss.

The Spartans were given the opportunity to play on the ice at the Quicken Loans Arena through a contact their coach had with the Lake Erie Monsters scheduler. They were able to get the College of Wooster to come despite schedules for most teams already being set, allowing the game to happen.

The excitement of playing at the Q was evident from the first faceoff. With over a hundred students from CWRU making the trek downtown to the Q to bang on the glass and heckle the opposing teams, the Spartans were able to ride the energy over the course of the game. “It was really great having everyone here,” said CWRU captain Will Brenn.

The Spartans played to their advantages and were able to emerge victorious. The difference between the two squads was obvious from the opening tip off as the Spartans were small but speedy, while Wooster played with a larger team and with more upfront strength. Being able to outskate the Wooster defensemen and lose pucks was a strong positive for the CWRU forwards who found the back of the net eight times on 36 shots. “We play a really fast game,” said Brenn, who scored four goals of his own, “It allows us to find the back of the net.”

This strategy did come with a few drawback as the Spartans saw extended periods of dominating play, early in periods, before being forced into defensive play as they lost stamina and allowed Wooster to take long stretches of both momentum and possession. However these stretches were not overly detrimental as the Spartan goalkeeper Patrick Thomas was able to stop 17 of the 18 shots he saw and then Patrick Balsam saved 14 of the 16 shots fired his way.

The Spartans opened the scoring with a goal by Brenn, the CWRU starting center, and an assist from left defenseman Nick Bi at the 11:25 mark on the first period. Brenn found the back of the net for the second time of the night just under eight minutes later as he beat the Wooster keeper again with only 49 seconds left in the first period, this time with a combined assist from right wing Jonathan Greenberg and left wing Kyle Peters, to find themselves up 2-0 after 20 minutes of play.

The Spartans didn’t let up as the second period opened sending the puck into the back of the net at the 6:16 mark when Greenberg snuck the puck in with an assist from alternative Jason Pickering. Wooster wasn’t about to go down without a fight and responded with a goal of their own two minutes later, to return their deficit to a mere two goals, 3-1.

However the Spartans jumped back out to a three-goal lead and then to four as Brenn landed his final two goals of the game on assists from Greenberg and then Peters at the 9:58 and 15:05 marks. The Spartans entered the locker room after the second period with a 5-1 lead and no signs of slowing down.

Wooster opened the scoring in the third quarter at the 6:04 mark but then the Spartans responded with a string of rapid fire goals in less than three and a half minutes. This time the Spartans spread out the scoring as first Carlo Herbosa, then Daniel Hopkins, and then finally Peters found the back of the net to put the Spartans up 8-2.

The two teams, exhausted by the intense competition, began to play rougher hockey in the third quarter as the Wooster squad, frustrated by the blowout, worked to climb back into the game. The two teams combined for five penalties in the final period of play while only having been placed into the box a combined six times in the opening two periods of play, with Wooster being booked for five of those six and the first four.

Forward Jonathan Greenburg saw the most box time for the Spartans with two penalties in the game, one for interference and the other for cross checking, both in the high intensity third quarter. “It happens,” said Brenn. “When a team is down by a lot they get frustrated. It’s not something you want to see happen but it happens.”

The final score may have ended at 8-2 if not for two final goals by Wooster in the final minute and 33 seconds of play, a last ditch attempt to soften the blow. “We relaxed out there,” said Brenn. Despite relaxing, the Spartans still walked away with a dominating 8-4 win and a lot of great memories of playing on the professional ice.

The Spartans will be returning to the ice to take on Edinboro University on Nov. 14 .