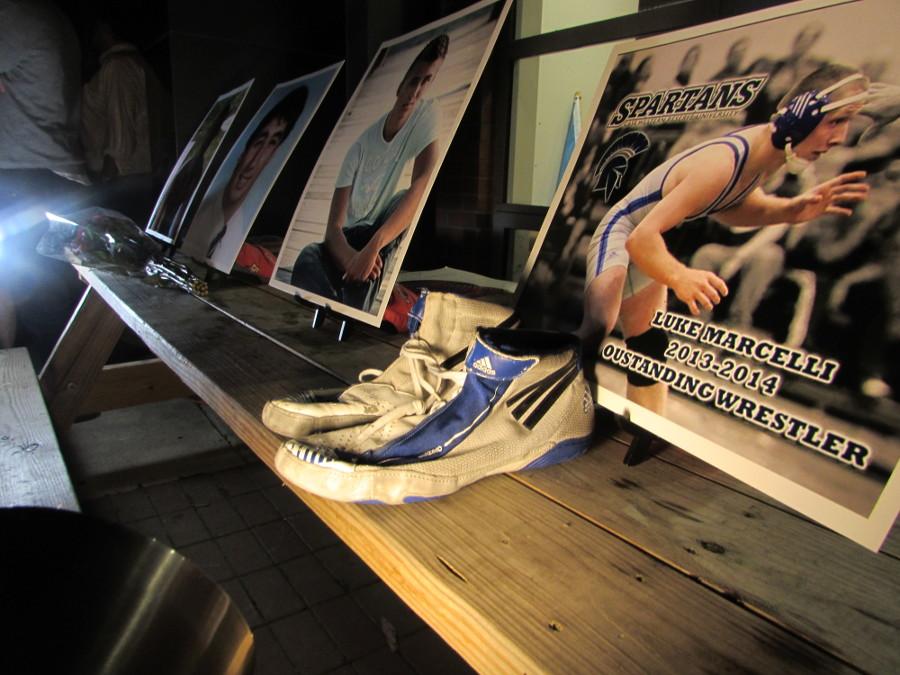 Friends of the plane crash victims constructed a makeshift memorial in the front yard of the Zeta Beta Tau fraternity house. Hundreds of students visited to pay their respects at a vigil. Two of the fallen were members of the ZBT fraternity. Three were members of the CWRU wrestling team. Mike McKenna/Observer

“Every student has been affected by this tragedy today.”

All is quiet on the Zeta Beta Tau’s house front lawn as students start gathering for the vigil, a memorial to the four Case Western Reserve University students who passed away in a plane crash on Monday night. They show up early—almost 45 minutes before the scheduled start time people begin to trickle in.

The fraternity house is large and open, with glass walls revealing the inner common room, where one brother sits, head in hands. Many other brothers stand outside on the porch outside—hugging, crying, laughing, as they recount memories of their two lost brothers and the two other students lost in the accident.

Tissues are passed around between the brothers, then placed back on the ledge, where the other boxes already sit, still in their plastic packaging. The students who show up to the vigil are perfectly silent, lining up in the yard like statues, as they watch the brothers and the others gathered on the porch.

A semi-circle path leading up to the house is lined with luminaries, many left over from last year’s Relay for Life event. The small stickers are still on the bags.

The yard is quiet, except for the brothers, the quiet piano music they are playing in the background, the sound of crickets in the trees and the loud generator of the Action News 19 truck.

When the speeches start, someone goes and asks them to turn it off. They do.

One of the crash victim’s parents, along with at least seven other students, make speeches honoring the lives lost. They’re hard to hear in the back, even after the truck is turned off. Faint phrases fall through, and the general message is clear—live your life the way these boys did. Strive to be better every day, to give as much as you can and then more, to never take any moment for granted. Some make it through their speeches without crying, others do not.

The vigil fills the yard and sidewalk, extending all the way past Leutner Dining Hall. More than 600 students are here to pay their respects. A few community members show up with therapy dogs, who sit in the back. Even the dogs are quiet, except for one soft howl. It’s an opportunity for the whole campus to come together to recognize and mourn one of the worst tragedies in the university’s history.

Students woke up Tuesday morning to an email from President Snyder. “I write with profound sadness…”

The email didn’t give much information, just that four undergraduates, identities not yet confirmed, had died in a local plane crash, and that counseling services were available for all those who needed it. Over the next 24 hours, students would hear that reiterated again and again—counseling services are available, please take advantage of them.

The men’s identities were released shortly after, identified as sophomores William Michael Felten and Lucas Vincent Marcelli and freshmen Abraham Pishevar and John Hill. Felten and Marcelli were both brothers of ZBT. Marcelli, Pishevar, and Hill were all members of the wrestling team.

The students rented the plane for four hours for recreational reasons. Felten was the pilot. He received his license a year ago.

Shortly after taking off, Felten requested permission to turn back. The plane crashed shortly after that. NTSB investigators are still looking into the exact cause of the accident, but it is likely that it had to do with engine trouble.

The plane was engulfed in flames after crashing. The four men were trapped inside, and they all died on scene.

News vans and reporters swarmed campus on Tuesday morning, pulling students aside as they walked to class. Lou Stark, Vice President of Student Affairs, held a press conference. He called what happened “a tragedy of immense proportions.”

The boys’ wrestling coach, Mark Hawald, spoke. He said how hardworking, how dedicated the boys were. How he could never prepare for something like this to happen.

The outpouring of love and support on Facebook and Twitter started quickly. Those who knew the boys, those who didn’t, everyone expressed their regret, their sadness, their complete inability to truly comprehend or deal with something this devastating. The university community was like a family, and whether or not they knew the boys personally, students felt that they had lost their brothers.

At the vigil, people show up wearing fraternity letters or shirts from their sports teams. It’s a show of solidarity.

After the speakers, mourners mill around the yard, looking at the makeshift memorial to the students that the brothers made in front of the house. On a wooden picnic table, almost too clean, sits pictures of the four boys on glossy poster board. Three of the boys have headshots, while Marcelli has a wrestling picture. “Outstanding Wrestler 2013-2014” reads the text on the photo.

In front of the pictures is a single bouquet of flowers, red roses.