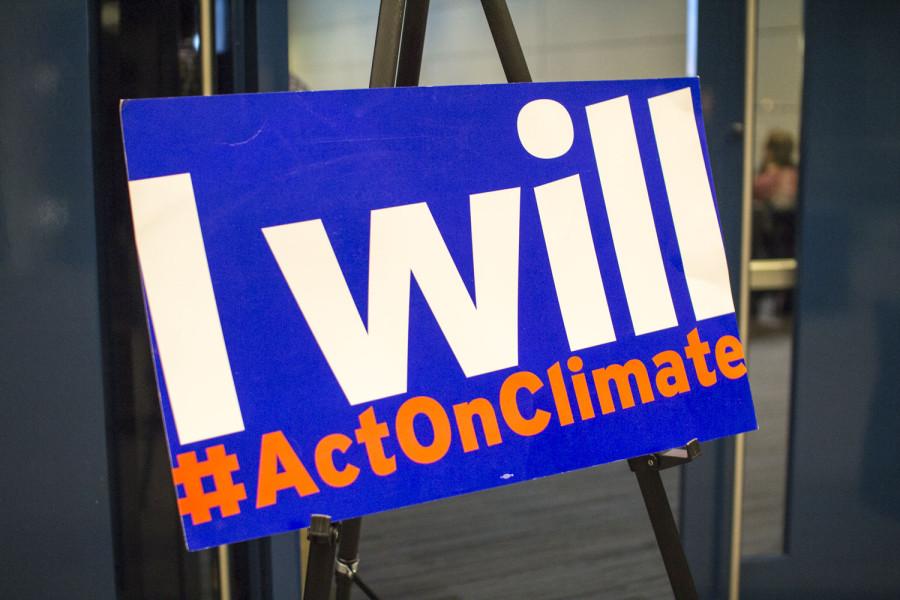 Experts at the panel talked about the different ways in which climate change is affecting Cleveland residents, including its effects on economics and public health.

With Cleveland being affected by bouts of extreme weather this winter, climate change is at the forefront of many students minds. On Feb. 3, the Tinkham Veale University Center hosted a symposium that explored the local impacts of global warming on the quality of life in Northeast Ohio.

The National Audubon Society, a non-profit organization dedicated to conservation, hosted the event. The society has approximately 500 chapters across the United States. Amongst the roughly 100 people in attendance were many recognized figures in environmental programs throughout Cleveland and Northeast Ohio.

With Lake Erie accounting for 28 percent of Ohio’s yearly tourism income, keeping the lake clean isn’t just a matter of sustainability. It’s a matter of economic necessity. According to panelist David Spangler, who is the president of Lake Erie Waterkeeper, Inc. and vice president of the Lake Erie Charter Boat Association, sport fishing on the lake also supports 20,000 jobs in northeast Ohio.

Rapid algae growth in Lake Erie, primarily due to heavy rainfall, can become harmful when certain toxic forms of algae begin to spread. While some algae are beneficial and necessary for the lake’s ecosystem, others contain high levels of phosphorus that can make the water undrinkable.

According to the World Bank, water scarcity is one of the largest threats to the world economy, with 36 percent of the world’s population already living in water-scarce regions. Bryan Stubbs, executive director of the Cleveland Water Alliance, is working to improve water quality around the world. He referenced California’s recent drought as an example of a water scarcity affecting a highly industrialized and contemporary area.

Stubbs also stressed the importance of protecting watersheds, a particular concern for Ohio with the growth of oil and gas drilling in the Utica Shale region, which covers half of the state. Drilling wells, sometimes referred to as fracking wells, generally use between two and eight gallons of fresh water per drill.

When people talk about reforestation, they don’t usually reference urban settings. But with Cleveland only having 19 percent tree canopy, a low number for a city, many panelists called for change. Currently, organizations in Cleveland are working on reforestation, and have received over $1 million in grants to educate communities and plant trees.

David Beach, the director of GreenCityBlueLake, the sustainability center at the Cleveland Museum of Natural History, spoke about the need to reduce carbon emissions and prevent deforestation.

One way that he proposed to reduce carbon emissions was through building smart homes. These are energy efficient homes designed to require significantly less energy for heat and electricity. A recent exhibit at the Museum of Natural History showcased the first smart home in northern Ohio.

Cleveland has the largest amount of urban farmland in the country, according to Joanne Scudder, the Director of Sustainability at the Cuyahoga County Fairgrounds. The Ohio City Farm, next to West Side Market, is a good example of this, along with local farms Cleveland Crops and Central Roots.

According to Scudder, climate change is forcing farmers to change how they manage their yield. Higher temperatures and droughts have been lowering corn and soybean production levels, forcing a larger reliance on wheat.

Climate change can also cause issues in public health. Air pollution is a commonly cited issue, especially in cities. According to pediatrician Aparna Bole, the systemwide Sustainability Manager for University Hospitals, air pollution can be particularly bad for children.

Longer, hotter seasons in Northeast Ohio have resulted in increased pollen. Bole explained that more extreme weather conditions and higher pollen counts may be a contributor to the increasing asthma rates in Cleveland.

Every speaker stressed the importance of community support in pushing lawmakers to take action on climate change.

According to Marnie Urso, the grassroots coordinator for the National Audubon Society, policy makers can’t be expected to be experts in every field.

“Understand where they’re coming from,” stressed Urso. “That opens up a conversation and allows you to be a resource to them.”

Urso focused on the importance of federal action but said that community support is necessary to facilitate that. She encouraged everyone to call their members of Congress and ask them to support federal action on reducing carbon emissions.

The panelists also advocated using social media activism, including sending tweets with the hashtags #CLEclimateimpacts and #actonclimate to politicians and friends.