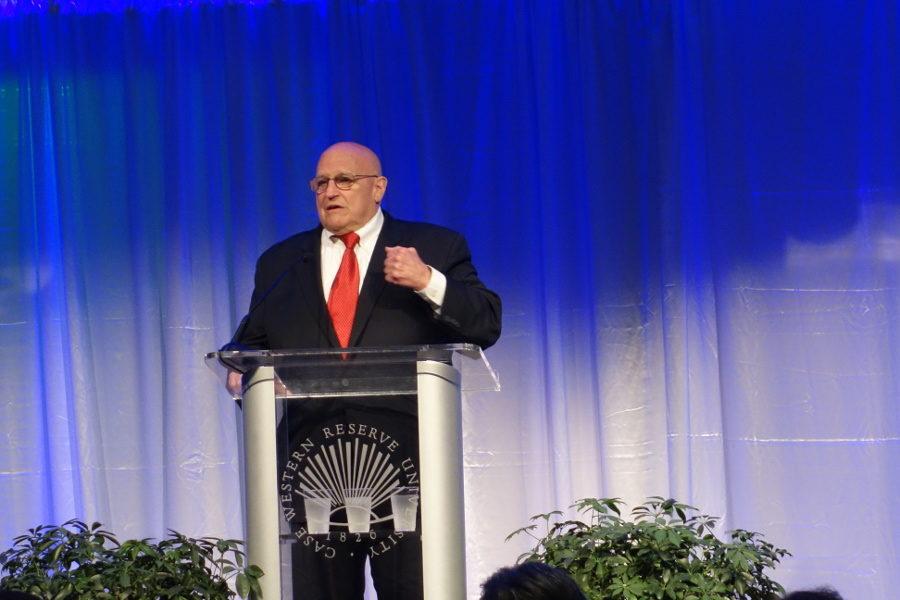 Former US Deputy Secretary of State Richard Armitage spoke at the dinner, giving a brief overview of many countries' most pressing issues.

At the event, President Barbara R. Snyder and other CWRU administrators talked about internationalization, and former U.S. Deputy Secretary of State Richard Armitage was the guest speaker.

As Coordinator of Communications for the Center for International Affairs, Jody Bonhard worked with the other office staff to plan the event, and she feels that it achieved its goal of highlighting CWRU’s steps towards internationalization.

“The dinner gave us a chance to step back and show the sheer amount of progress and success that we’ve seen across campus—not just in the schools and the college, but also in the stories and highlights of what CWRU students, staff, faculty and alumni have accomplished,” said Bonhard.

Bonhard was overwhelmed by the “sense of community and excitement” among the approximately 180 guests at the dinner. During the dinner an alumna told Bonhard how proud she was of the university, while the alumna’s companion—who is affiliated with another university—said she had “CWRU envy.” A current student told her he had chosen CWRU because it encourages engineering students to study abroad.

“I am used to talking about how important internationalization is,” said Bonhard. “It was surprising (and exciting) to hear such different CWRU community members telling me how much it means to them.”

Vice Provost for International Affairs David Fleshler began the night and introduced representatives from the Ohio Department of Higher Education’s Board of Regents. Members of the Board of Regents took to the stage with a striped tote bag, out of which they took a large plaque recognizing CWRU for its many efforts at internationalization.

Snyder accepted the award, noting that it was especially meaningful as two of the regents attended the university and another has a son who earned his PhD here.

”We have so much to celebrate as we look at where we’ve come and when we think about our global outreach and our internationalization efforts,” said Snyder.

After guests had finished dinner, Fleshler spoke on internationalization. Globalization, he said, is the movement of things like material goods, culture and pollution across borders. Internationalization is higher education’s response to that.

Fleshler also recalled signing an agreement with Qassim University in Saudi Arabia on the day of the terrorist attacks in Brussels.

Following that, Jessica Berg, Co-Dean of the School of Law, spoke about the law school’s many international projects, such as the war crimes lab, the human rights clinic and the international law program. She then introduced Armitage, describing his accomplishments in the government.

“I appreciate the introduction,” said Armitage after stepping up to the lectern. “You could have said just, ‘Here he is, another out of work Republican.’”

Armitage then spoke about the current state of the U.S. It is not in decline, he said, and the world is a mess, but it’s been worse.

”Let’s get a grip, take a deep breath, and realize right now we don’t have an existential threat,” said Armitage.

For the bulk of his speech, Armitage gave what Fleshler later described as “a remarkable understanding of the world in such a short time.”

Armitage began by discussing ISIS and the situation in the Middle East; He thinks that they will have 30 years of war in the region, like the Thirty Years War in Europe in the 1600s. Next, he spoke about his support of the Iran nuclear agreement.

In an overview of Asia, Armitage said that Japan is the most important Asian country to the U.S. because it hosts U.S. military bases, that North Korea has an uncertain future as Kim Jong-un may die of lifestyle factors or assassination and that China is “pushing down” on its people with things like censorship as its economic growth slows.

”I know I haven’t touched on everything,” said Armitage. “Well, maybe two more.”

He continued, saying that “every one of us here in the West is guilty” for the recent situation in the Ukraine, that Vladimir Putin is likely to be reelected in Russia in 2018 and that an African Renaissance is unlikely because of “tribal, religious jealousies.”

Baeslack called for applause for past faculty Fulbright Scholars and Faculty Seed Grant recipients, and then Watkins congratulated Global Perspective spotlight students and those who have received study abroad scholarships.

“Our students are intelligent and adventurous and creative, and we get to celebrate that when we see what they do when they’re abroad,” said Watkins.

Sisters and fourth-year students Rahma and Bahja Sofiane, from Tunisia, were highlighted this year as Global Perspective students. They both appreciated that this event took the time to appreciate CWRU’s internalization.

”Being at Case, I was actually able to meet people from different countries that I’ve never been to,” said Bahja. “Not only are you from a different culture, so you already feel international, but you’re also exposed to these different cultures.”