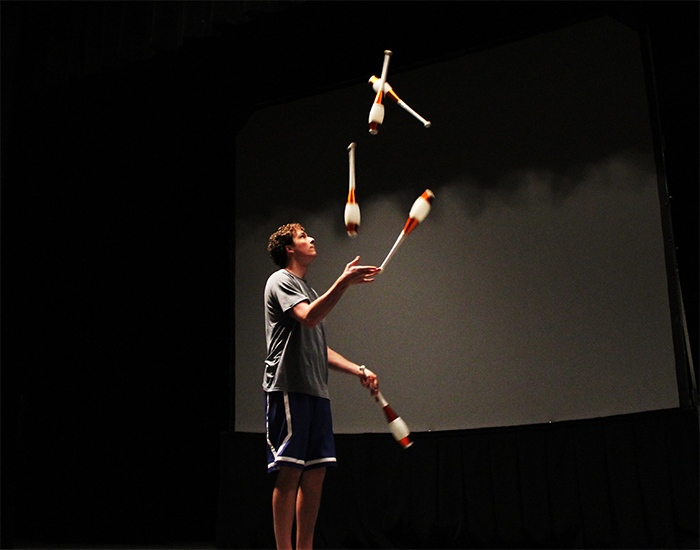 All college students must find ways to juggle schoolwork, social life and sleep. The Case Western Juggling Club finds ways to juggle all that and much more.

Today and tomorrow, the Juggling Club will be hosting their annual event, Juggling Spectacular. First created in 2006, this free event began as a small half-hour show put on for a handful of people, but last year’s show grew to welcome a crowd of over a hundred for an act four times as long.

This year’s Juggling Spectacular theme will be Juggling Around the World. “We take a trip across the globe, and even to outer space, to see what juggling we find,” said Juggling Club President Jon Duff.

Both nights of the show will be the same lineup, and the acts will include presentations by members of the club that highlight their different skills in juggling. Some of these acts will involve glow-in-the dark and balancing tricks, along with the many various forms of juggling itself.

Juggling does not just mean throwing balls in the air in some intricate way- according to Juggling Club member John Gunderman, juggling is any form of object manipulation. This includes forms like diabolo, poi, contact juggling, balance tricks, pen-spinning and yo-yoing.

“There’s a lot of stuff in this category,” he said. “We have members who dabble in all of the above mentioned categories, and more.”
Other than just object manipulation, the club has a few members that also unicycle and free line skate, adding a lot of variation to the performers’ abilities.

Both Gunderman and Duff believe the knife juggling portion of the night will be a crowd favorite. “It is usually quite funny and also fairly dangerous,” said Duff. “We are juggling real machetes that, although not sharpened, are heavy enough and pointy enough to draw blood if caught incorrectly.”

Gunderman knows the juggling acts will be impressive to different types of people. “It’s a sad fact of juggling that sometimes the most difficult tricks aren’t the most impressive. If there are any jugglers in the audience who recognize the difficult tricks, there’s some stuff in there that they’ll particularly enjoy,” he said.

The juggling club can often be seen practicing inside Leutner, where their colorful materials fly through the air and flash through the windows of L3 and The Spot. “We are fairly well known,” said Duff. “I can’t tell you how many people I have taught to juggle in these past two years.”

Their popularity has only grown. Though there are definite regulars that attend most practices, there are also many students who come every now and then to juggle as a form of stress relief. New members are always welcome to the juggling practices, which are 6-8 pm every Tuesday and Thursday at Leutner.

“We also perform at a ton of events around campus, so I like to think most Case students have seen us at least once,” said Duff.
For Gunderman and Duff, their juggling enthusiasms reach into their childhoods. Gunderman learned at a young age through a juggling book from a book fair. “The librarian at the time saw me with it and commented that buying the book was useless, as her son had tried it and had failed. I took that as a challenge,” he said.

Duff also started at a young age, by a teacher who taught him in the third grade, and his talent continued from there. “When I came to Case it was the first time I had a large community of jugglers I could practice with, so that refreshed my interest,” said Duff.

Gunderman is also grateful for a community of enthused jugglers. “I know a lot of universities don’t have juggling clubs, so I feel lucky to participate in one here at Case,” said Gunderman. “Recently students have been showing more interest. We’re really lucky to have a lot of new freshman members this year.”

The only other event the Juggling Club hosted was last semester’s Cleveland Circus, a new and already successful juggling festival started just this past year. “We had around 100 people attend over the three days, which was a good start to what we hope to make an annual event,” said Duff.

Despite new leaps the Juggling Club made, the classic Juggling Spectacular will not fail to disappoint.

The event will be held in the Thwing Ballroom from 7:30 to 9 pm.