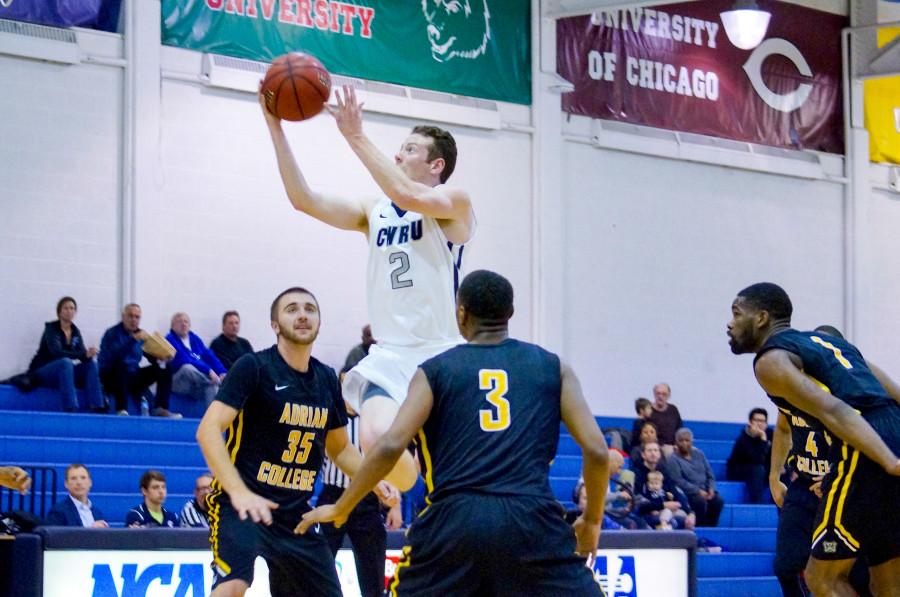 Spartan point guard Jimmy Holman drives the lane for the bucket earlier this season. Holman and the Spartans sit atop the UAA heading into this weekend.

The team first celebrated a win over Carnegie Mellon University (CMU) 94-81. The Spartans also beat Muskingum University 106-101 to start a two game winning streak. The team is now 8-4 including 4-1 in their last five games.

In the first game against Muskingum, the offense was locked in as there were six players with double-digit point totals, led by second-year forward David Black and his 26 points. In the final game of non-conference play, the Spartans prevailed. Black was 10-16 from the field including five for nine in three point field goals. The forward added to his impressive game by also registering four blocks.

Fourth-year guard Matt Clark played a well game all round with 11 points, seven rebounds and a career-high seven assists. The Spartans would need all the help they would get as they attempted to hold off Muskingum’s Joshua Keyes, who poured in 36 points along with an incredible 21 rebounds to keep the Muskies in the game throughout. The teams were nearly identical in shooting percentage with the Spartans at 48.8 percent and the Muskies at 48.7 percent. The key difference maker in the game was the turnovers. The Spartans forced 20 Muskingum turnovers and scored 23 points off those turnovers. Fifteen of those turnovers were steals in a season-high effort for the team.

When asked about the team’s effort on the defensive end, Head Coach Sean McDonnell said, “Our players gave a great effort during our games over winter break. The Muskingum game was a great example of guys playing incredibly hard and picking one another up when teammates were in foul trouble.”

Opening UAA play, the Spartans faced CMU at home. The Spartans were rarely challenged throughout the game, pulling away at the end of the first half and never having a lead smaller than eight games throughout. Despite the success, the Spartans had a poor shooting average at only 41.9 percent for the game, quite a bit lower than the Tartans’ percentage of 45.6 percent.

Once again the Spartan defense prevailed, forcing 18 Tartan turnovers and scoring 26 points off of those turnovers. Third-year guard Javier Alvarez led the scoring for the Spartans with 24 points and Clark scored 20 in the second half to finish with 23 for the game. The Spartans had a 17-0 advantage in the fast break category to help cover their poor shooting percentage. Despite the offensive struggles, the team was able to pull ahead.

The action kicks off at 8 p.m. against Washington University in Horsburgh Gymnasium.