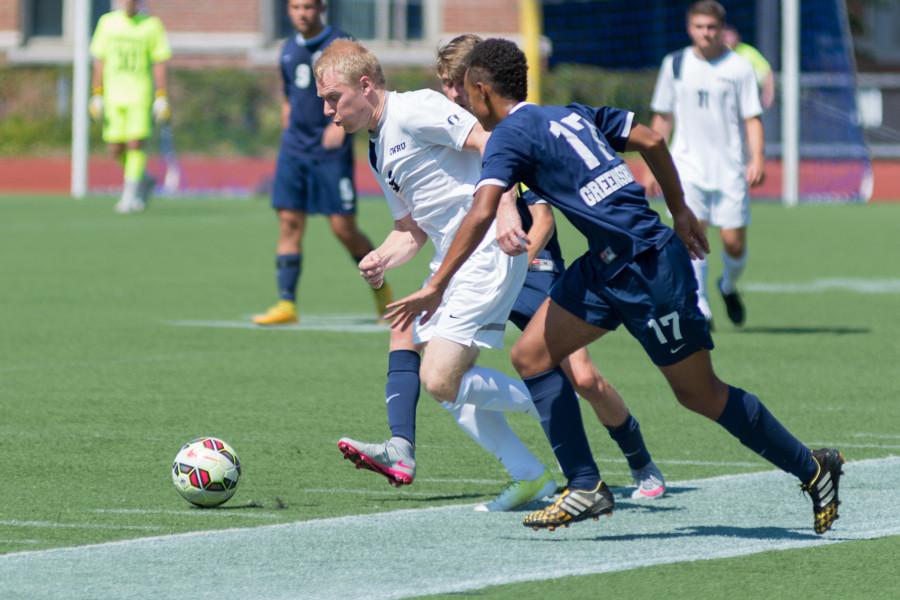 The Spartans jumped up to 7-1 with a big win over Wooster Wednesday night.

Playing at home on DiSanto Field last Saturday, Sept. 19, Case Western Reserve University men’s soccer team picked up a fourth straight win against Ohio Northern University behind the strength of a shutout. Regarding his team’s recent success, Head Coach Brandon Bianco said, “We’ve really tried to focus on details of our play and worked to minimize our mistakes.”

Against Ohio Northern, the Spartans displayed a balanced attack, scoring one goal in each half and sustaining strong defense throughout. From the kickoff, CWRU was on the attack, with eight shots taken heading into the final minutes of the first half. Even with the strong defense and constant attack, the game was nodded up at 0-0 until third-year forward Joshua Prosser dribbled around Ohio Northern’s defense in midfield and drilled the ball into the center of the goal.

Although the Spartans controlled the first half, the team entered the second half with a narrow 1-0 lead. Ohio Northern demonstrated a more aggressive offensive attack in the second half, with six corners and eight shots in the 45 minutes. Midway through the half, the Spartans had a couple of scares with Ohio Northern getting a couple shots on the goal, but second-year goalie Christian Grimme kept focus and provided two saves.

Towards the end of the match, the Polar Bears began overloading their offense and left a frail defense to assist their goalie. The score remained 1-0 until Spartans fourth-year midfielder Chris Cvecko led first-year forward Noah Kleedtke to dribble past an overzealous goalie who was out of the box. Kleedtke scored easily with an open net, providing insurance heading into the waning seconds of the match.

The Spartans displayed a great overall team effort, with six different offensive players taking shots and a tenacious team defense that only allowed Ohio Northern two shots on goal. Specifically Grimme stepped up, achieving a second shutout in as many starts. Coach Bianco commended his team’s efforts and said, “ It’s really been a collective effort with all of our seniors and junior class, especially, really stepping up on the field and from a leadership perspective.”

Following three wins in a three game homestand, the Spartans will play the next four games on the road, including the first conference matchup of the season against New York University to cap off the streak of road games. Although midweek road games can be rough, Coach Bianco looked at the positives of playing road games prior to beginning University Athletic Association (UAA) conference play, saying, “It’s also an opportunity for our players to be together for an extended period, which is good for bonding.”

Only allowed four goals in their first seven games, CWRU looks to carry this defensive success into upcoming road and UAA matches.