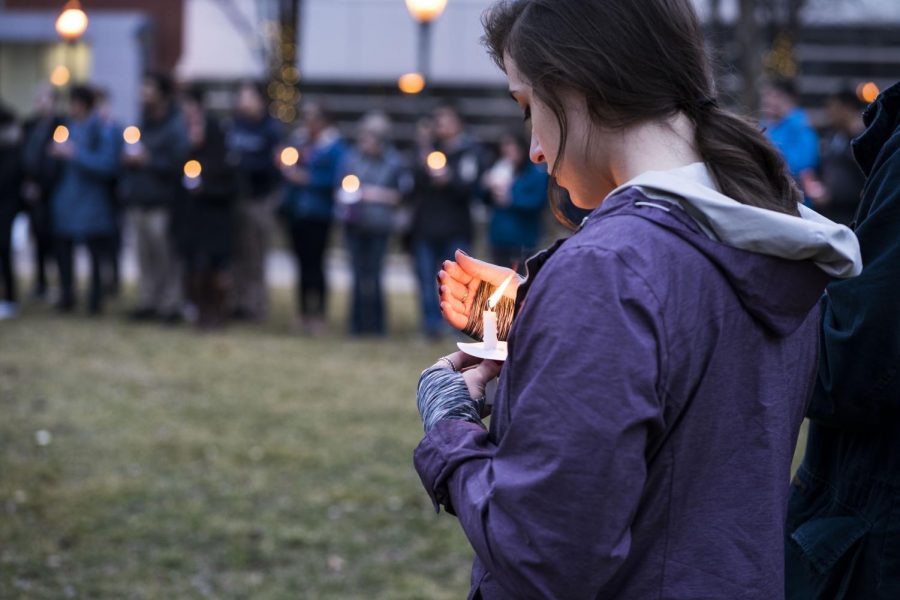 Dozens of students and community members congregated along Kelvin Smith Library (KSL) Oval for a candlelight vigil this past Thursday to show solidarity and respect for the victims of the recent New Zealand mosque shootings. The vigil was organized by the Muslim Student Association (MSA) and included speakers and a tribute to the victims.

Thursday evening’s overcast skies reflected the somber attitude of those attending the vigil. Although most came in pairs or small groups, these cliques were abandoned to form a large circle, symbolizing unity and solidarity inside KSL Oval.

Ibtesam Ghazy, a second-year biology, nutritional biochemistry and sociology major and president of MSA opened the event and introduced the speakers.

Ramez Islambouli, an Arabic lecturer in the Department of Modern Languages and Literatures followed Patterson. Islambouli highlighted the significance a response to tragedy can have.

“When tragedies happen … boundaries are broken … [and] we come together as family.”

Islambouli also spoke about the power of love.

“Love is the best weapon against hatred,” he said.

After Islambouli, a man from the Cleveland community spoke about his friend who was killed in the shooting and about the terrible randomness of such tragedies.

Then, students from five different organizations around Case Western Reserve University read aloud the names of the 50 victims. The event ended with a moment of silence for the first-year student, Justine Boyle, who recently passed away. In those final minutes, the lamppost light seemed to mimic the candles’ color, and the sense of solidarity and togetherness was especially strong.

Organizing the event was hectic, noted Ghazy, given that it occurred right after spring break, but holding it was imperative.

“This vigil was important to show our respect for the people who lost their lives, and to stand up against bigotry that necessitated the attack that created this,” said Ghazy.

Twenty-eight-year-old Brenton Tarrant was charged with murder for organizing and carrying out the attacks. He is a self-proclaimed racist and released a manifesto prior to the attacks.

“[It was a] moment of solidarity against hatred.”