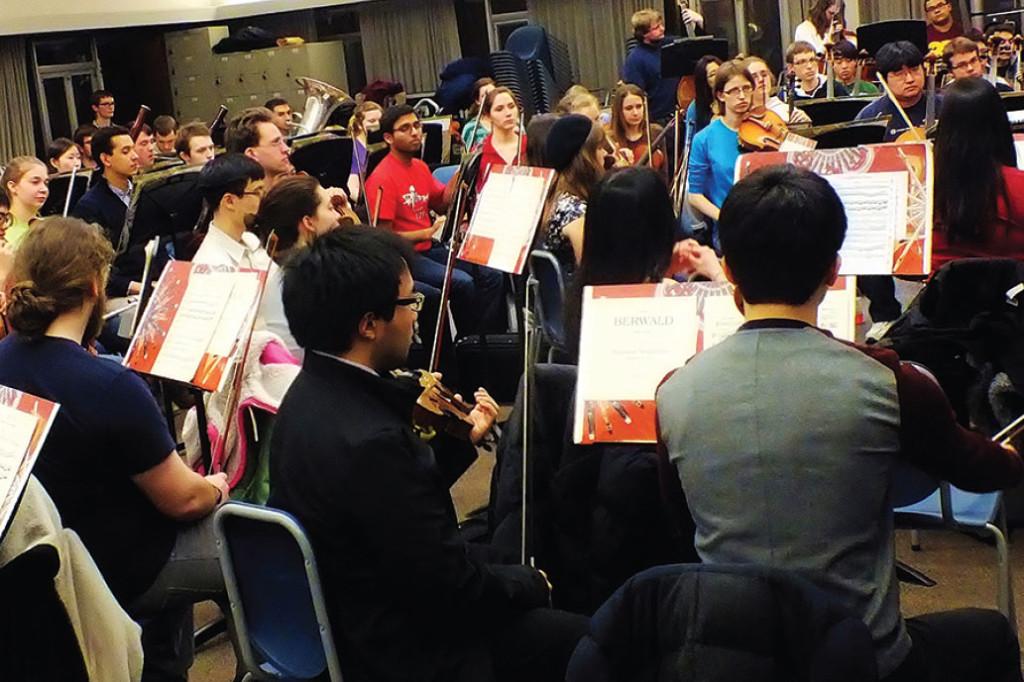 The CWRU Orchestra practices before their performance at the Church of the Covenant on Monday.

You may not have even known that Case Western Reserve University has a student orchestra, much less that they had a concert coming up. Symphony Orchestra director Kathleen Horvath knows this is a common fact at CWRU.

“Many don’t even know of CWRU’s Music department,” she said.

The CWRU Symphony Orchestra has already performed once this semester and put on three other concerts in the fall semester. The orchestra’s past performances include the Blue Block Party, accompanying Museum of Contemporary Art’s (MOCA) grand opening, and a rock orchestra.

The group will also be performing two more shows later this semester, including their more popular “Bach to Rock” concert.
Typically, the CWRU Symphony Orchestra does not garner that much attention on campus. Horvath noted that with more advertisements, they sometimes have sold out shows, but they usually only expect up to 100 people attendees, usually comprised of parents, colleagues and friends of students.

At this concert, the orchestra will be performing four classical pieces by three different composers: Rimsky Korsakov, Tchaikovsky, and Franz Berwald. There will also be one intermission. Most loved by the student musicians, according to Horvath, is the larger orchestral repertoire. “They typically like the biggest and splashiest piece,” she said.

Horvath does not just choose the music sporadically, though. “My job is to take strengths in the orchestra and find pieces that make us sound really good,” she said.

To get a good mix of music, Horvath chooses popular songs that will not only attract more people, but also lesser-known works. She also chooses specific songs to highlight individual students’ musical talent.

At the upcoming concert, Tchaikovsky’s “Violin Concerto in D major, Op. 35” and Berwald’s “Konzertstück for Bassoon and Orchestra” will feature students Lok Lei and Frankie Delgado on violin and bassoon, respectively.

Students featured in the concerto pieces were chosen through last year’s annual concerto competition that the orchestra hosts.

Lei, an undergraduate Music and Biology double major, encourages people to come see the show. “CWRU is a very sciencey school, but it’s good to see an artistic side of that. It’s good to support lesser known groups,” she said.

Unlike Lei, many students in CWRU’s Symphony orchestra are not music majors. Physics major Joe Szabo plays the trumpet as a form of escape from schoolwork. “It’s really a lot of fun because everyone’s really committed to putting on a good performance and doing the best they can,” said Szabo.

Other campus orchestral groups include CWRU’s Camerata Chamber Orchestra, which is less intense than the Symphony Orchestra. “We have about the same number of concerts. We share personnel and equipment,” said Hovorka.

The music facilities in Denison Rehearsal Hall are undoubtedly being stretched thin. Practice rooms are usually all booked, with musicians playing in hallways or lobbies to try to get extra in practice time. For how little the orchestra meets, this additional practice time is necessary.

Twice every week, the orchestra meets for 90 minutes. With only two weeks to prepare for upcoming shows featuring all new music, the group moves at an impressive pace.

Horvath attempts to strike a balance so the students will not be overwhelmed with orchestra work on top of their academics.

“For two practices a week, they are really great– that’s what makes CWRU what CWRU is,” said Horvath.

Membership usually settles around 80 to 85 members, but different pieces require different orchestration. To prepare for this particular concert, the orchestra pushed their chairs closer together for their last few practices to acclimate itself to the type of sound they will be getting inside of the church.

Unfortunately, the close proximity of orchestra members has led to a problem with norovirus, and now empty seats dot the orchestra’s rows during practice.

However, Horvath is filled with nothing but faith and admiration for each of her students, regardless of their majors. “They’re a really great group of people,” she said. “I’d love to see the audience base build largely because the students deserve it.”

The upcoming concert is a perfect opportunity to show support of CWRU music programs with its intense tunes performed by the some of the best student musicians. It is also free to the general public.

The CWRU/University Circle Symphony Orchestra will be performing at the Church of the Covenant on Monday at 7:30 p.m.