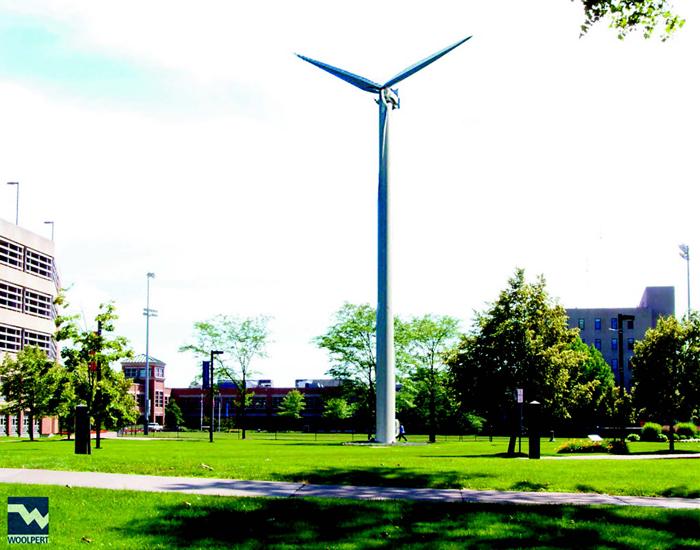 Case Western Reserve University hopes to become a leader in wind power and sustainable energy this fall, when it will begin constructing the first of three wind turbines, comprising part of a $6 million project that could make Cleveland a vanguard of wind-related innovation, education, and development. After years of intensive research and feasibility studies, the area roughly between Veale Athletic Center and the 1-2-1 Fitness Center has been chosen as the location for the first turbine.

The completed project will culminate in the Wind Energy Research and Commercialization Center (WERC). Funding for this endeavor comes from the Ohio Third Frontier (which promotes cutting-edge industry and economic growth within the state), Case Western Reserve, and the University’s numerous industry partners.

Collaborations began when David Matthiesen, an associate professor of materials science and engineering at CWRU, proposed that the school be allowed to own and operate three wind turbines. He felt the turbines would foster the University’s independent research as well as the development, by local companies, of new wind-related technologies.

Matthiesen explained that due to the often exorbitant costs of wind turbines, very few are available for testing and experimentation. Start-up companies in the field are then faced with the challenge of certifying their products through testing and demonstration in extant turbines.

“People are real reluctant to change anything in a wind turbine because of the insurance coverage on it,” said Matthiesen. “What drives the wind industry is this relationship between the money, the banks and the insurance companies.”

This reluctance can result in the stagnation of wind technology and development; turbines are already simple and elegant machines, and so improving on their efficiency is often a process of small steps, of tedious trial and error. “It occurred to me this was an opportunity for us,” Matthiesen said, “They get access to a wind turbine, so they can get into the marketplace. But from our perspective, we get to generate new knowledge. That’s what a research university is about: generating new knowledge. And so when these companies come in with their new sensors, and their new drive systems, we are the first ones to see that data set.”

The significance of owning (rather than borrowing) such data cannot be overstated. Apparently inciting jealousy from German colleagues, the University’s plans to use the project for research will set it apart from other schools with wind turbines, where the generation of electricity takes priority over research and innovation.

“I have to remind everybody that the reason we’re doing this is for the science and the education,” said Matthiesen. “Generating the new knowledge.”

But, of course, the search for knowledge does not undermine use of the turbine as a source of renewable energy. According to Alexandra Litofsky and Kyle Berkowitz, co-presidents of the Student Sustainability Council (SSC), research and development and practical sustainability are not mutually exclusive. “The wind turbine accomplishes a lot of things by being here,” Berkowitz said. “But definitely up at the top of the list is working towards better sustainability in the future.”

Litofsky added that research and practice advance one another. “They’re well-integrated,” she said. “You don’t do a lot of things on campus that are not with some goal of research, particularly here. And so doing further research into how a thing works and how it functions here is supporting the goal of sustainability. Just as the pursuit of sustainability is supporting the goal of research. Because all of these alternative energy technologies are, we hope, the way of the future.”

The SSC hopes to see CWRU expand its implementation of green technologies—whether pneumatic or solar or tidal—although it knows that wind power is probably the most feasible form of renewable energy in Cleveland, where the sun rarely shines.

But, while the campus may seem windy (particularly in November), some students know that Cleveland’s potential for wind power can hardly compare with that of more famously wind-friendly environments, like Ireland. “The sustainability of wind turbines in Cleveland is still unclear,” said senior John Zhang, who noted that the city’s “inconsistent wind levels might prevent the turbines from being utilized properly.”

Students might also know, however, that the area planned for the first turbine’s construction is one of the windiest on campus. And after having conducted research and feasibility studies there, Matthiesen feels confident that the turbine’s combined benefits of new research and sustainable energy are worth it. “If you’re saying, ‘Do we have as much wind as they do in the North Sea,’ the answer is, on average, ‘No.’ If you say, ‘Do we have enough wind to turn wind turbines,’ the answer is, ‘Certainly.’ But to the point of being a research university, we are measuring this,” Matthiesen said.

After collecting measurements for five years, partly to prepare for the turbine, evidence of these early efforts is still visible throughout the area. Students passing through can look upward and identify instruments mounted to the tops of lamp posts and rooftop corners, as well as a cup anemometer on the Veale parking garage. There is also a device called a LiDar, which sits at the eastern edge of the soccer field and collects data on the Doppler shift of dust particles as it sweeps the area with a harmless and invisible infrared laser.

More than just a discreet means of calculating wind velocity, these instruments epitomize the generally unseen efforts that are put toward forging a sustainable future for Case’s campus. In the eyes of the SSC, the wind turbine is not the first step toward sustainability; it is merely the most noticeable.

“One of the innate qualities of the wind turbine is that it’s really, really visible,” said Berkowitz. “It’s going to be right next to Veale, so it’ll have an impact on the minds of not only Case students who walk by it every day, but visiting athletes who will hopefully carry back the thought about being more sustainable to their universities.”

Litofsky pointed to some of the smaller steps being taken, including the gradual replacement of halogen and incandescent lights on campus with LED lighting, installation of solar panels on Veale’s rooftop, and the growing number of solar compactors around campus. “The wind turbine is real good for getting people to think, to start with, to draw attention to it,” she said. “But it’s all important.”

The appeal of the turbine, then, lies partly in its capacity to symbolize both sustainability and the exciting research opportunities afforded by the burgeoning field. And it is a powerful symbol.

“It’s odd for an engineer to say, but I think they’re beautiful,” said Matthiesen. “It will change the face of the campus, that’s for sure.”