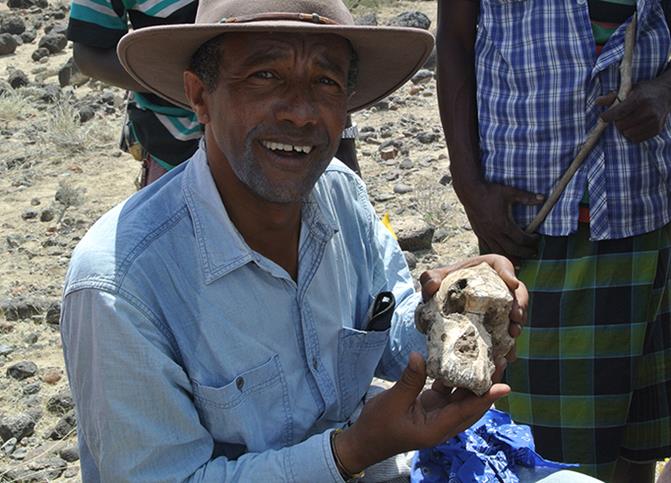 “There was a moment when I couldn’t control my emotions. Apparently, I was jumping up and down, a behavior that I don’t usually show when I find hominin fossils, and the locals who were standing next to me thought that I was going crazy!”

That was the reaction of Yohannes Haile-Selassie, curator of physical anthropology at the Cleveland Museum of Natural History, when he found the 3.8 million-year-old cranial fossil of an early human ancestor. Haile-Selassie is the lead of the Woranso-Mille Project, which has been working at the same site in Ethiopia for 15 years.

“[The cranium] is the most complete and undistorted cranium ever found in the hominin fossil record older than 3 million years,” explained Haile-Selassie. This allows for an increased understanding of our early human ancestors. Due to the fossil’s uniquely preserved features, researchers were able to observe facial features not previously seen in the species.

The team has been traveling to the site for approximately six weeks every year, and it is not the first time they have discovered notable fossils. One such fossil was a partial foot, which signified the existence of multiple potential human ancestor species alive during the time of Lucy.

Beverly Saylor, the Armington Professor in the department of earth, environmental and planetary sciences at CWRU, has been working with Haile-Selassie since the beginning. She was the lead on the team tasked with dating the cranium, a complex task.

The team travels to the site every February for approximately 10 days to both complete field observations and collect samples for further lab analysis.

“It’s best to directly date the fossil site,” Saylor said when asked about carbon dating the cranial fossil. “But, as in this case, that often is not possible.”

Rather, the team had to resort to material found several kilometers away from the fossil site, which posed the task of needing to correlate the dates from the material to that of the fossil site. With that, they found the fossil to be between 3.804 (±0.013) to 3.77 (±0.014) million years old.

“In addition to determining the age of the cranium,” said Saylor, “we were also able to reconstruct the landscape across which its owner roamed and the broader environment in which that landscape formed.”

This provides the teams much more information on the variables influencing the development, growth and life of the early human ancestor.

Saylor explained that the team’s next steps are to write a proposal to the National Science Foundation so that they might be able to work with the researchers at Hadar to compare the sites and fossils of both the cranial fossil and Lucy.

Haile-Selassie’s team will go back to the site and begin a larger excavation in hopes that the rest of the skeleton is there. Additionally, there is still a lot more analysis to do on the cranium to learn the full implications of what it means for the scientific community.