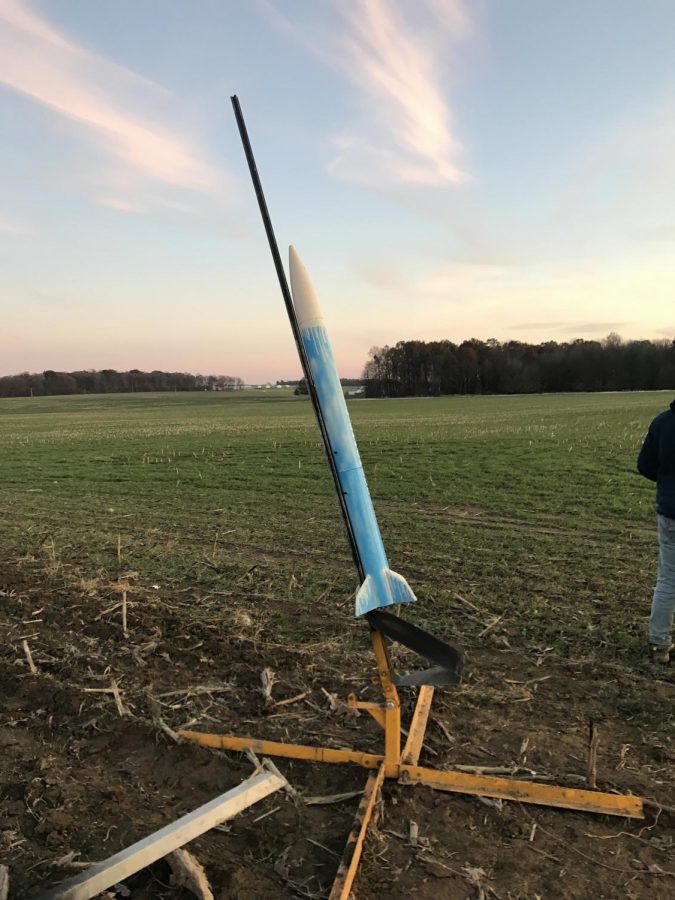 On Thursday, Nov. 19, a blue timer counted down in the Case Rocket Team (CRT) headquarters in think[box]. It marked the one day, 15 hours and six minutes left until the next rocket launch for the team. This launch was an important one for the group, as it offered many new members an opportunity to launch their first rocket and returning members whose previous rockets failed a second chance to gain a rocket certification.

“You should name it Big Bird,” said Will Backer, gesturing toward a yellow rocket taller than the person who made it.

“I was going to put lightning bolts on it,” said treasurer Leticia Dornfeld.

“You can put feathers on it,” replied Backer. “That would make it more aerodynamic.”

Many of the team members are aerospace engineers, so CRT gives them the chance to take the skills learned in the classroom and use them in a practical setting. The interdisciplinary skills necessary for a successful launch, the design of a rocket and the computer simulations required to see how high it will go, give the team an appeal to even those who aren’t looking to launch metal in the air for a living.

Madeline Smith launched her level one rocket into the air at a farm in Marshallville, Ohio. It flew up in a blast of sparks and white smoke, shooting up to 2,000 feet in the air. It worked perfectly, the parachute system going off right on time for a smooth descent.

Then, the wind carried the hunk of cardboard past the team and into a tree.

Smith’s last rocket landed in a tree a few months ago, and to this day is still in that backyard.

Luckily, this time Smith’s rocket was easier to retrieve. Dornfeld climbed the tree, poking at the rocket with a stick and shaking branches to force it loose.

“Stupid rocket,” exclaimed Dornfeld while prodding at the rocket.

Smith got on President Sebastian Abisleiman’s shoulders to grab the rocket, a maneuver that finally brought the rocket down to earth.

“Quick, drop it on the ground, so it’s official,” said Public Relations Chair Maximus Ross through a walkie talkie.

Smith triumphantly dropped the rocket on the muddy cornfield, putting one of the longest flights in CRT history to an end.

“I think [my rocket] has a mind of its own and wants to go into trees,” said Smith, whose successful launch, despite a tree getting in the way, led to her earning a level one rocket certification.

Backer’s attempt at getting level one certification failed, though through no fault of his own. He fell victim to a faulty engine that sent an ejection charge backward towards the base of the rocket instead of forward to separate the nose cone.

The launch started like any other until no parachute came out, and the worst case scenario happened: a harmless rocket turned into a ballistic missile in the middle of an Ohio cornfield.

“I can build another one pretty quickly, so it’s no big deal,” said Backer, taking the incident in stride.

“You should frame that somewhere,” said Ben Ault, a CRT alumnus whose family owns a farm in Marshallville. “It’s always better to know it’s not your fault.”

Ault graduated in 2016 and currently works as a service elevator technician.

“When I was in Rocket Team, we had a hard time locating a place to launch in Cleveland,” said Ault. “I was the only place they had. After I graduated, they asked if they could still come over, and I’ve been helping them ever since.”

As the day reached the golden hour, there was enough time to launch one of the four level-two rockets prepared for the day’s launch. The honor fell to Ross and his rocket “Frostbite.” They activated the charge. Nothing. They pressed down on the lever again and “boom!” It shot up, quickly moving too far away to be visible. The team waited for the parachute to unfold and the rocket to slowly descend for retrieval.

But again, the worst sound possible for a rocket—a giant booming thud as the rocket erupted—made the field tremble.

The rocket, like Backer’s before it, had turned ballistic, and no one knew where it landed. The team looked over video footage for clues, but found none. The 10 members of the team formed an impromptu search party, stepping over harvested corn and mud to try to find a hunk of light blue cardboard sticking out of a hole in the ground. The day turned to night, and still “Frostbite” evaded all capture. However, with the exception of the two ballistics, most of the team’s launches on Saturday were successful.

In February, CRT will be back at this field to launch more rockets into the sky. When they return to Marshallville, Smith’s rocket will probably still be in that tree. As of press time, “Frostbite” is still somewhere in a farmer’s field, waiting to be picked up by an unsuspecting combine harvester. The three level-two rockets that didn’t get to launch will have a chance to tweak their designs and come back more prepared than before, with additional add-ons and modifications after learning from the experience of others.

“Even though I didn’t get to launch, it’s always fun just to get my hands dirty,” said Dornfeld. “We’re all friends here; we really like to help and hang out with each other.”