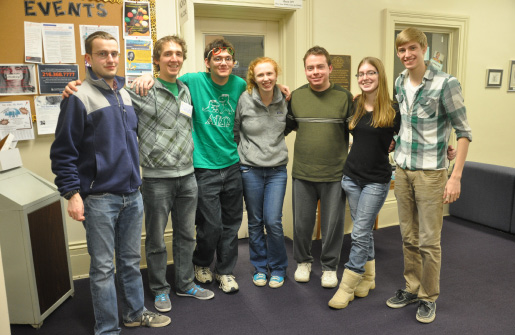 APO first began at Lafayette College in Easton, Penn. in 1925. Frank Horton, the fraternity’s founder, came up with the idea while serving in the United States Navy. Since APO was initially only for men, his goal was to “set a standard of manhood” for young men that would allow them to start life off right.

Upon his return from the Navy, Horton became a scoutmaster at Lafayette College, where he realized that the scout oath was the ideal foundation for his envisioned group. His dream was successful, and in December of 1925, the first 14 undergraduates were initiated. APO now has over 21,000 student members at 357 colleges nationwide.

Robert London and Melody Martin, the national and regional directors of APO, both attended the initiation and handed out membership certificates to all of the new brothers and the new member of honor. “The certificates are a reminder for each member of the hard work they put into their pledge period, and the brotherhood they have gained by joining Alpha Phi Omega,” said director of communications for APO Stacey Robinson.

Rupp recalls being anxious about the crowd of influential people, but after speaking with London, he commented, “…he’s a great guy. He’s very down-to-earth and in touch with the fraternity, which definitely helped with the nerves.”

APO is a fast-growing group of individuals who are dedicated to service. Every week, APO brothers volunteer at the Children’s Museum, Cleveland Foodbank, MedWish, and the Church of the Covenant. They have served at the Brooklyn Animal Shelter, in Montefiore, in various 5k races to benefit charities, at Judson Manor, and at various youth-oriented events on campus. APO members can also be found helping at campus events such as Halloween at Home and Thwing Study Over.

When not assisting with other events, “APO plans and organizes several larger events to raise money for various charities,” said Rupp, “such as Ugly Spartan at Halloween time, Jail ‘n’ Bail (which is coming up in April), and March for Marfan. We’re always willing to help out, and we’re constantly looking for new opportunities to get involved.” This December, some of the brothers will be heading to Anaheim, Cali. for the APO national convention.

The fraternity is working toward a goal of 500 chapters by 2025, APO’s centennial celebration. Mark Stratton, the fraternity’s national president, issued this challenge at the 2010 National APO convention.

“[The milestone initiation] was a great event with many alumni present and students from other chapters. Everyone who could was interested in sharing in this very significant milestone,” London explained. “The Case Western Reserve chapter has been very successful and it is always fun to interact with our student members and learn why they are so dedicated to Alpha Phi Omega and helping to improve their communities.”

Other attendees at the initiation included national scouting and youth service chair Pete Forbes, Region 5 scouting and youth director Patrick Higgins, Region 5 operations chair Regina Forbes, and Section 59 chair Ashleigh Lawrence. There were also many alumni present, including the man responsible for re-chartering the APO chapter in 1992. Twenty-five brothers from APO chapters at Mount Union, Kent State, and University of Akron could also be found at the initiation along with approximately 80 members of the CWRU chapter.

Second-year student Melinda Ashe was the lucky 400,000th member to be initiated. “Everything was really unexpected,” said Ashe. “Our adviser told us that Bob London would be in the area, so we were all really excited for chapter.”

“When he announced that I was the 400,000th initiate, it was really overwhelming. Everyone was congratulating me and just showing so much support for APO,” Ashe continued. “USG came and Barbara Snyder wrote us a letter.”

Ashe is currently the secretary for APO and has been enjoying getting to know some new brothers who are very excited about their 400,000th initiate. “I love service and APO, so it feels really nice that people will remember me, and that [CWRU’s] chapter is getting all this positive attention, because we do a lot of great service and are really growing as a chapter.”

Rupp feels strongly about the impact that APO has had on its surroundings. “It’s crazy to think about 400,000 brothers being initiated. The fraternity started with only 14 members, and the rate at which we’re growing is also increasing greatly,” he explained.

“What I find even more important is the countless number of [service] hours that 400,000 brothers have performed over the years and how profound an impact the fraternity has had in all of the communities in which it exists,” he said. He also shared that the 400,000th member initiation and the diverse group of attendees present made him realize the impact that APO has had on this campus.

“It feels a little silly,” said Ashe, “because I didn’t do anything to get all of this attention, it was just luck. I’m proud to be a brother no matter what, but hearing from people around the nation, and having schools from our district come to the reveal made me realize how special the APO family is.”