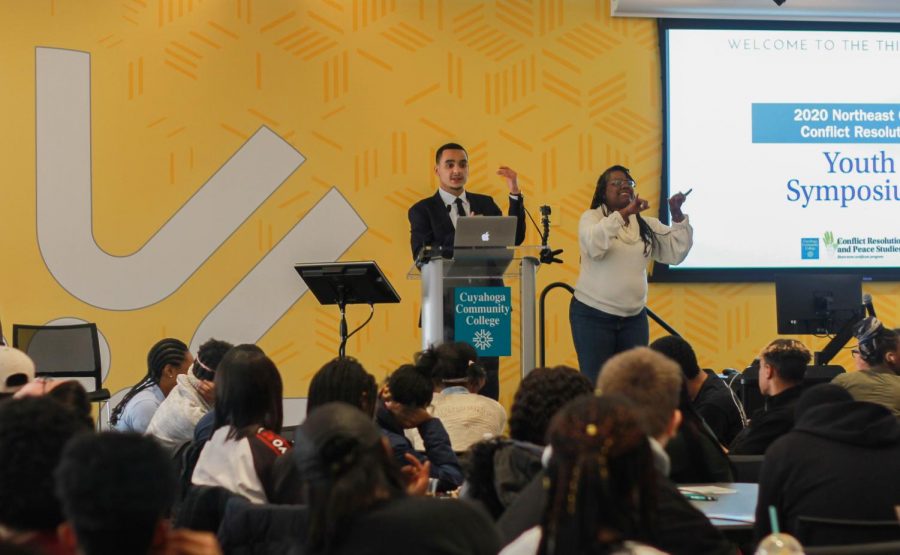 Last Friday, nearly 300 high school students from the Cleveland Metropolitan School District came to Cuyahoga Community College (Tri-C) for the 2020 Northeast Ohio Conflict Resolution Youth Symposium. This was the third annual symposium, which centered around the theme of “Becoming Agents for Positive Change in Our Schools, Communities and the World.” The initial symposium only had 75 students, but it has since grown to four times as many students in just three years.

This year, the symposium featured Kevin Jones, a Tri-C alumnus and third-year student at Case Western Reserve University. Jones was a graduate of Tri-C’s The Mandel Scholars Academy as well as the Conflict Resolution and Peace Studies Program.

Jones spearheaded this year’s keynote address. He explained: “My premise behind the speech was ‘the gap doesn’t close,’ which is something my dad says. It means that people who have more life experience are able to impart wisdom and maneuver through life in ways that younger people are able to pick up”

One of the ways Jones communicated this theme was by having a panel rather than a single keynote address. He was accompanied by Winchell Grant, a two-time Tri-C graduate and current student at Ohio State University, and Dawud Hamzah, an entrepreneur who created a self-awareness business called Helping you Produce Excellence (HYPE).

“I thought it would be more useful to do a panel and hav[e] each individual give their input based on their unique background,” said Jones. “I am 25, Winchell is 29 and Dawud is 32. The idea behind that is we curated the keynote speakers so they would have a diversity of ages”.

Jones also described his own life story so the students in attendance could pick up advice from him.

During the address, Jones recounted attending the Black Solidarity Conference at Yale University. However, before he could finish the anecdote, he was interrupted by Hamzah.

“Hold on,” said Hamzah. “You’re talking about Yale—that’s not the reality some of these kids are experiencing—a parent incarcerated, violence in their neighborhoods.” 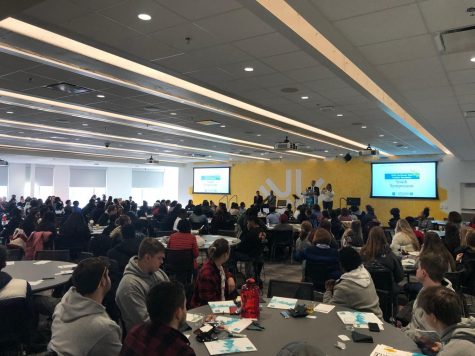 Though the audience was initially taken aback by the interruption, Hamzah effectively steered the dialogue towards deeper issues.

“It was really nice … having an adult who knows that that isn’t a reality for 80% of the kids” said Jones.

The symposium lasted the entire school day. After the keynote, the students split up into breakout sessions which were headed by students, educators and community members.

“I primarily focused on education,” said Jones, when describing the sessions he led. He explained how he used well-known sayings, like “you can’t teach an old dog new tricks,” to emphasize the universality of learning.

“The brain is made to consistently learn and absorb knowledge,” said Jones. “Even when you are listening to a new album or new song, the subconscious mind will learn those lyrics.”

Antonio Sanford is one of the organizers of the symposium. He expressed his hopes for what students would take away from the event.

“I hope that [students] take away the experience of getting to know different people and feeling more grown-up, a little more adult, and it makes it more real,” explained Sanford. “That’s what I really want, at the end of the day, it just makes it more real to them and they take this and really realize that they are change agents and that they’re actually able to make change in their schools and their communities.”

“The Cleveland community needs to understand that these 300 students will fill seats at CWRU, CSU and OSU, so by putting the investment in events like that, you are investing in students that will fill the seats of their university,” said Jones. “Having [CWRU] involved in a way that high school students are engaged and become familiar with this institution is extremely important”.