CWRU student, poet Christopher Cannon on telling the stories of the dead 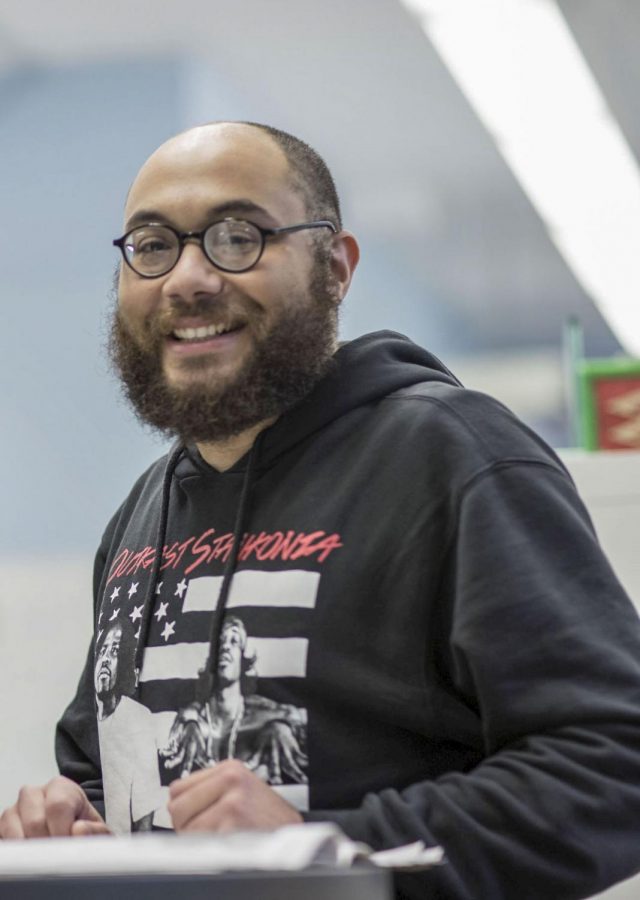 Christopher Cannon’s first exposure to gang culture came at the age of 11 when he witnessed his brother’s gang initiation.

Now, the 27-year-old fourth-year history and English major is working on a collection of poetry called “Death Dance.” His work aims to tell the stories of those who were unable to escape the gang violence that surrounded him growing up in East Cleveland and to speak for those who cannot speak for themselves.

“This project has transfigured into me telling the stories of people who I knew growing up, most of whom died in really senseless acts of violence, and giving them the chance to speak after death,” said Cannon.

Cannon plans to use “Death Dance” for his English capstone. The poems in the collection often shift between Cannon’s voice and the voice of people who Cannon grew up with. The work moves from precise descriptions of events in a singular person’s life and then changes to talk about a broader socio-cultural experience.

Cannon said he had an interest in literature from a young age and always did well in school.

He credits his dad for his love of reading. He exposed Cannon to books related to marginalized people, especially black people, that helped him gain an understanding of himself separate from the Eurocentric public school curriculum. Cannon said the ability to have pride in his black identity saved his life.

“I think it’s something I always came back to,” said Cannon. “My sense of self and sense of culture and pride in my ancestral heritage pushed me to go back to school.”

Cannon’s writing focused on social events that affected his family—things like riots, race relations, the prison-industrial complex and institutional racism—but rarely took a self reflective tone.

Once Cannon came to Case Western Reserve University, after transferring from Cuyahoga Community College, he gained enough distance from his past to reflect on his upbringing. He first began writing about his own experiences in professor Sarah Gridley’s poetry workshop last year.

Cannon’s ability to discuss immediate issues, while still using mythology, history and his imagination to create a great sense of depth structure, stuck out to Gridley. Gridley said Cannon responded well to comments from his fellow poets and learned how omission can be a great tool in a writer’s arsenal.

“His poems bring readers into a rich field of attention, soliciting participation, reflection and transformation,” said Gridley. “It is a joy to teach Chris because he is both deeply intellectual and resourcefully soulful. He ignites the ‘work’ in workshop.”

Two of his poems, “Earl” and “Pa’ Unos Estudiantes en México / For some students in Mexico,” got published in the spring edition of the Case Reserve Review. “Earl” is an ode to a childhood friend who taught Cannon to value poetry and writing despite the poverty around him.

Earl became homeless when his father abandoned him to move away from Cleveland with his stepmother. The desperation of Earl’s situation caused him to get more involved in gang subculture according to Cannon. Earl was killed after breaking into someone’s house.

“It’s me reconnecting with his spirit,” said Cannon. “One of the lines in it is ‘will you remember me when my body isn’t a body.’ Hopefully he’ll act as a guide for me when I transfer into the otherworld.”

Cannon himself was involved in gang activity and spent time in prison during 2012.

“When you grow up in the city the only thing you really have is your name and your identity,” said Cannon on why he joined a gang. “You don’t have any money to your name or social status. It’s all about your identity and how people respect you. I knew from the jump that I had to make people respect me. ”

Once Cannon moved away from his past, he made it his mission to ensure that the young people he grew up with did not make the same mistakes that he did.

Cannon hopes to be involved with humanitarian work after he graduates but said he would continue to create artistic work no matter what he does.

“I always see myself creating. Producing art, producing poetry, producing visuals, doing performance art. And I think it will always be used as a platform to tell these stories of marginalized people, marginalized black people especially, on a more public stage and breaking into stages where these stories aren’t seen and aren’t heard,” he said.