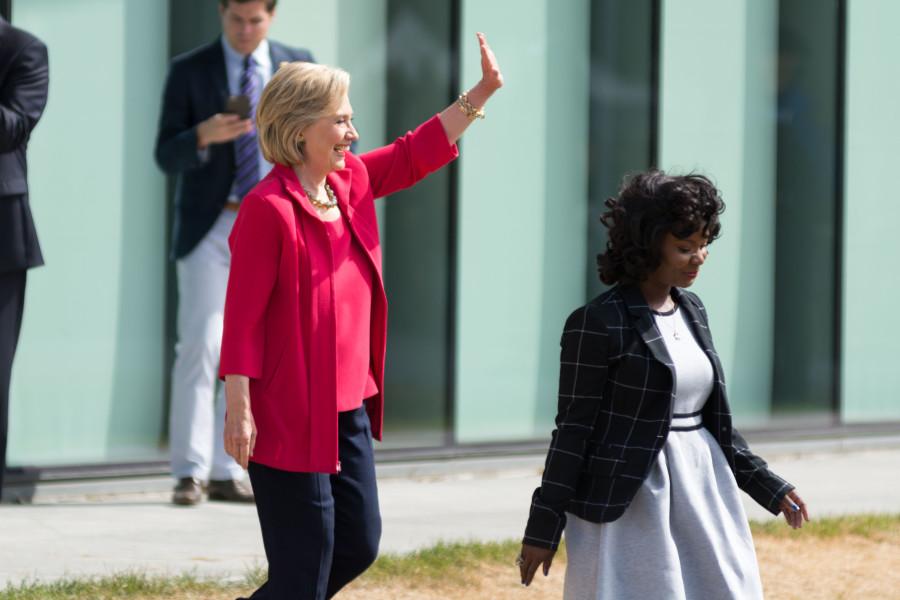 Fourth-year CWRU student Elle Marcus was in the front row. While she couldn’t see everyone who was in the crowd, when she turned around she guessed that that the audience was about 40 percent students, and 60 percent community.

Undergraduate Student Government president Chippy Kennedy had an even better seat, where he was able to see the entire crowd. With media credentials, he was located on an upraised stage behind Clinton’s podium.

“At some point [my] presence was requested,” said Kennedy. “My fingers were crossed that I wouldn’t have to talk… I wasn’t looking to make a political statement, so I’m really glad I didn’t end up talking. I’m glad I could just be an observer, albeit one that was awkwardly just standing by the camera.”

Further in the back, towards the left side, was fourth-year CWRU student Sarah Lisk. “I think anytime there’s something this large happening on campus, it’s important to go to,” she said.

Four years ago, Lisk was 18, and it was her first year at CWRU. She remembers being excited to attend college in Ohio, a swing state, during the presidential elections. “I’m excited to be doing that again this year,” she said.

The Clinton campaign event itself was unlike other events or speakers CWRU has brought in the past. “When I heard it was happening on campus, I thought it’d be pretty historical,” said Kennedy. “It was very much a campaign speech; it wasn’t a whole lot of advocacy for CWRU… It was a very politicized speech, but I guess that’s what should be expected.”

Marcus connected with certain parts of the speech, especially when a woman who grew up in the foster care system talked about the programs that helped her, connecting her experience to the similar programs Clinton advocates.

“Hillary had such good composure, such poise,” said Marcus. “It was a really good example of ‘show, don’t tell.’”

Kennedy, Marcus and Lisk all enjoyed parts of the event for various reasons, regardless of political disposition. The event ran smoothly as one of the first political events at CWRU this season.

Kennedy has even been advised that there may be more political candidates visiting CWRU in the coming months.

“I think for the community it was empowering,” he said. “I know a lot of Clevelanders were proud that they were getting more attention with the RNC and also Hillary’s campaign stop.”