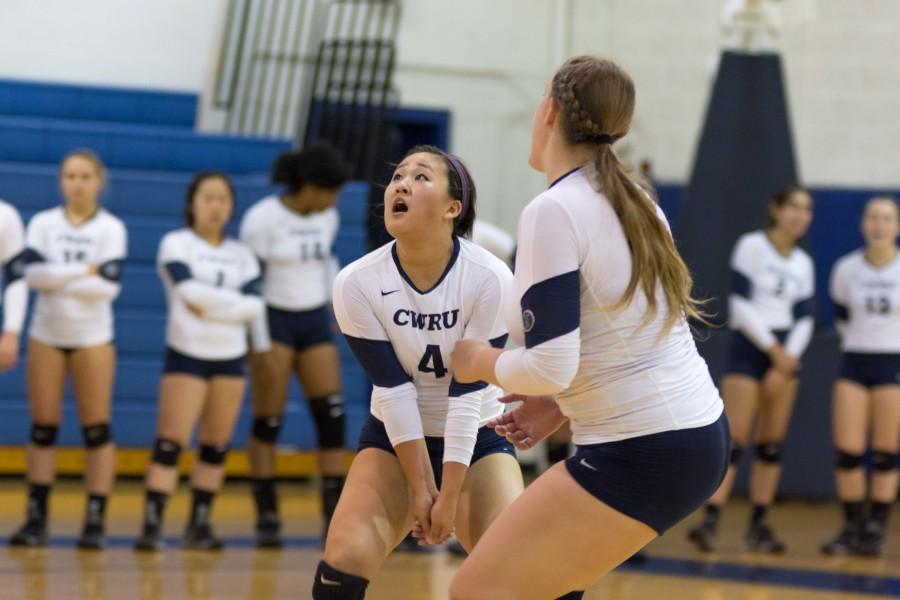 The volleyball team scrambles for a ball against Baldwin Wallace. The Spartans dropped their first game of the season in a nail biter Wednesday night.

After a series of astounding wins by the Case Western Reserve University team, they unfortunately lost their first game of the season this past Wednesday night.

Previously, the team extended their match unbeaten streak to 10 by defeating the then No. 18 University of Mount Union Purple Raiders (6-4) in three sets 27-25, 25-16, 25-18. The Spartans also extended their set winning streak to 24, having won the previous six matches 3-0 and ending the one before that by winning three straight. With the loss, Mount Union dropped to 25th in the American Volleyball Coaches Association Coaches’ Poll. CWRU rose to No. 30 in the poll.

However the Spartans dropped their matchup against Baldwin Wallace University (BWU) to lose their first game of the season Wednesday night as The Observer went to print. For a recap of the upset check out the article on observer.case.edu.

Head Coach Karen Farrell commented on the ranking, “More people are looking at us as one of the top 30, 40 teams out there [and] that’s exciting for us. It’s nice to get the recognition for all the work that’s been put in so far.”

The Spartans played a very tight first set. After a 6-1 run at the beginning, Mount Union got back in the game, pushing the set to extra points. CWRU won the set, due in part to senior leadership and all-out effort. “That’s really who we are this year,” a team that always gives max effort in order to win points,” said Farrell.

After the tough first set, the Spartans fed off the large crowd and used the momentum to dominate the rest of the match. Momentum “can be like an avalanche,” said Farrell, and CWRU rode the avalanche all the way to victory. Following the first set, the team gained enough confidence that they could fight off a few service errors and still believe they could win.

The match ended and jubilance in the locker room began. The team celebrated the victory with a birthday feast for a few players. Additionally players finally had a chance to show how the emotionally taxing game affected them. “We had kids crying in happiness; they had invested so much,” said Farrell.

After such an emotionally draining victory, it is possible the Spartans could be in for a letdown in their next match. However it was a full week after, which gave the team time to “appreciate the success we’ve had so far… and then to regroup and be focused” according to Farrell. “The break came at a really good time for us,” she said. After a good week of practices, CWRU is eager to face their next opponent.

The Spartans look to continue their streaks at home with a tough game against BWU (13-2), a team they battled in the pre-season, on Wednesday, Sept. 23 in the Horsburgh Gymnasium.

“BWU are a really tough team this year,” said Farrell. “They have a good energy and confidence about them.” The Spartans look to not let their guard down against the strong blocking Yellow Jackets. Early in the Mount Union match, CWRU struggled against their block. However they made the necessary adjustments to work around it.

“We’re gonna need to play our best volleyball,” added Farrell, “If we don’t…things could not go our way.”

CWRU does not return home until Wednesday, Oct. 7 against Oberlin, playing four matches in the Carnegie Mellon DoubleTree Invitational in Pittsburgh this weekend.