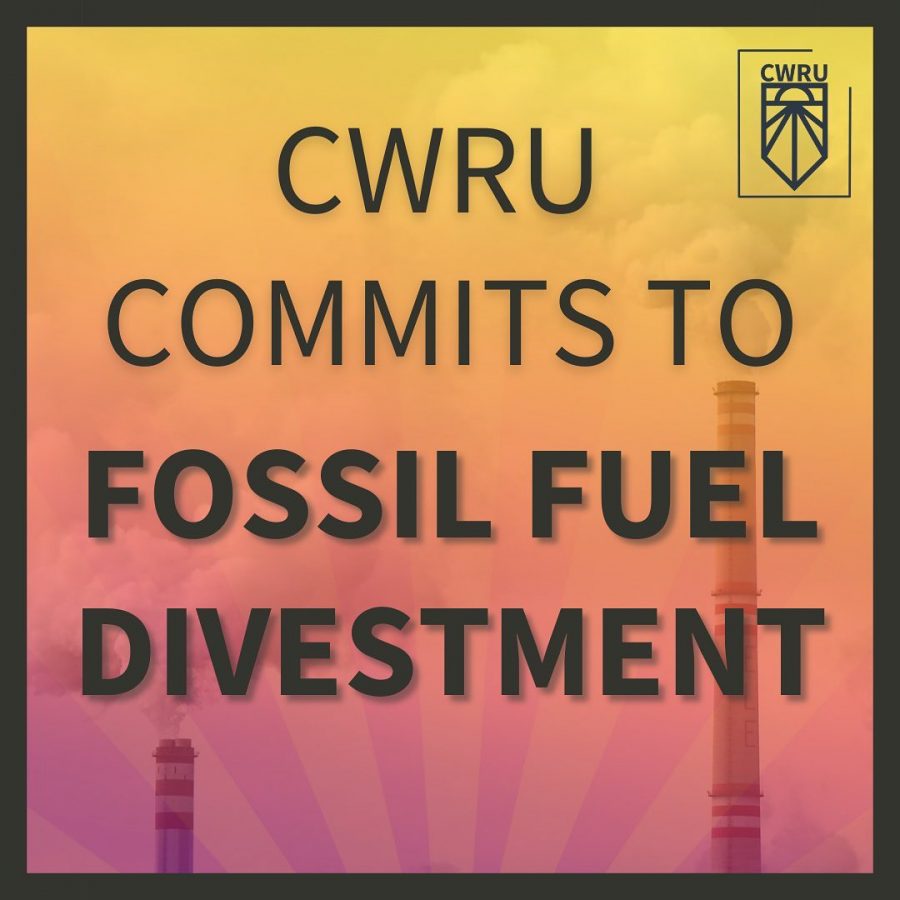 After years of effort by students, CWRU finally commits to divesting from fossil fuels.

In the past few decades, fossil fuels have become an increasingly pressing global issue. In the United States, in particular, fossil fuels have long been the point of political arguments about global warming and the economy. Many institutions and businesses have tried to modify their operations in an attempt to join the mission of green energy and sustainability, and as of last week, Case Western Reserve University has now officially taken another step in such pursuit.

On April 2, CWRU’s Undergraduate Student Government (USG) announced a commitment from Interim President Scott Cowen that the university would completely divest its endowment from publicly traded fossil fuel companies over the course of the next decade.

A press release from the same day, authored by the members of Sunrise CWRU, emphasized that the initiative came from the USG resolution 30-01, passed last October by a vote of 33-3-3, which sought to “Partner with the President and the Board of Trustees of Case Western Reserve University to Divest the University’s Endowment from Publicly Traded Fossil Fuel Companies.”

This success was thanks to Sunrise CWRU, an organization which has rallied strong support for divestment around both its moral and economic arguments since the organization was founded in 2019. However, Sunrise CWRU also emphasized that “complete divestment can only truly be realized with a reinvestment directive that specifically targets local renewable energy alternatives in an attempt to repair some of the harm of past investments.”

The press article continues on to explain that, “CWRU could not credibly claim to be an institution that promotes scientific inquiry and academic integrity, nor could it continue to assert that the university holds self-stated core values such as ‘academic freedom and responsibility,’ ‘ethical behavior,’ and an ‘emphasis on sustainability’ while continuing to make risky investments in the companies overwhelmingly responsible for the climate crisis that disproportionately harms historically marginalized communities.”

The university has detailed plans to eliminate $3 million in public holdings over the course of the next year, and the remaining $48 million in private holdings by 2030. The fight for green energy has been long and full of struggles for Sunrise CWRU: “there were many so-called leaders on campus, both students and staff, who pushed back on the objective as unrealistic,” they stated in the press release. However, as much of a major victory this announcement is, the fight to create a campus that benefits all of its students, workers and surrounding communities has only just begun.