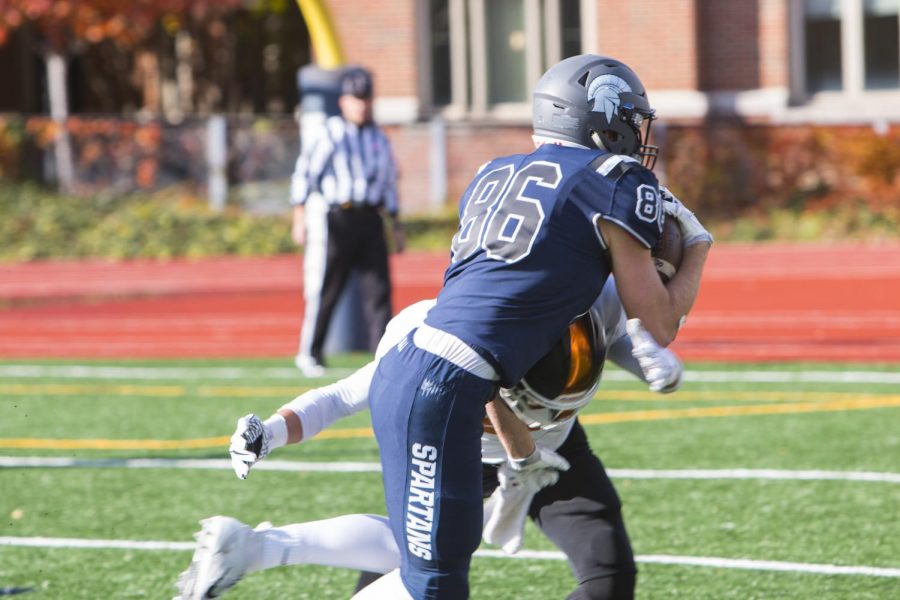 Waynesburg kicked off the game with a 33-yard field goal in just over five minutes of game time, but the Spartans came right back with their own field goal from first-year kicker Robertson Albrecht. The first quarter ended in a 3-3 tie, but the Spartans rallied in the second quarter to pull ahead of the Yellow Jackets.

The Yellow Jackets were hot on the Spartans’ heels though, and quickly scored a touchdown of their own to tie the score.

Fourth-year wide receiver Justin Phan caught a touchdown pass from Saxton, boosting the Spartan score to 17-10 right before the end of the half. Phan caught 12 passes over the course of the game, moving into third place among CWRU football players with 177 career receptions.

Second-year running back Kyle Turcovsky caught a 26-yard pass from Saxton to score the first touchdown of the third quarter. The scoreboard flipped to 24-10, and Waynesburg never recovered from the deficit. As the Spartans continued to score throughout the second half, Waynesburg continued to lag behind.

Luke DiFrancesco, a fourth-year wide receiver, caught a long 51-yard touchdown pass from Saxton, bringing it into the endzone for a 31-10 score at the end of the third quarter.

Moving into the final quarter of the game, second-year wide receiver Colt Morgan caught a quick touchdown pass from Saxton, bringing the Spartans to a whopping 38-10 score. This was Morgan’s 17th touchdown of the season, adding to his current record for most touchdown passes caught by a CWRU football player in one season.

Albrecht made his longest field goal kick to date at 37 yards, putting the Spartan score at 41-10.

At the last moment, the Waynesburg Yellow Jackets bounced back with another touchdown, putting the final score at 41-17.

The Spartans gained 476 yards throughout the game, with 327 of the 375 passing yards made by Saxton.

Between victory songs, a member of the Spartan Marching Band commented, “The team is stellar this year. It’s awesome to be able to play our fight song every game.”

Over the course of the game, Saxton threw for five touchdowns, each to a different receiver, making him the third Spartan player in CWRU football history to exceed 30 passing touchdowns in one season. Saxton has 33 touchdown passes so far, and one more regular season game to continue breaking CWRU records. Saxton is one short of the record for most touchdown passes thrown in one season, currently held by Dan Whalen at 34.

With another win under their belts, the Spartan football team moved up to No. 20 in the overall Division III college football ranking. At 8-1 overall and 7-1 in the Presidents Athletic Conference (PAC), the Spartans are tied for first place with Washington & Jefferson College.

The Spartans will compete in their final regular season game this Saturday, Nov. 10, at home on DiSanto Field against Carnegie Mellon University. A win over Carnegie Mellon in this year’s Academic Bowl would clinch at least a share of another PAC title for CWRU.

The season finale is also the team’s “Senior Day.” This year, the team is graduating 13 players, including Phan and Spitalli.

In order to earn an automatic bid for the NCAA playoffs, the Spartans need a victory in the Academic Bowl and a Waynesburg win over Washington & Jefferson. With Waynesburg moving down to a 4-4 record in the PAC, that automatic bid seems unlikely. Thus, the team will hope to earn one of the five at-large selections for the 32-team tournament.