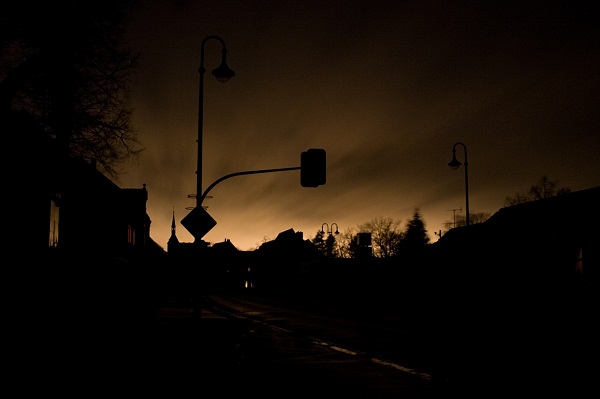 Power outages are more common during summer, but when the entirety CWRU's power went out on Sept. 7, students were filled with confusion.

“There was a general scream when it first happened,” said third year student Abby Ortenberg, the resident assistant for the fourth floor of Sherman House. “Then, a lot of ‘what’s going on?,’ and I don’t have those answers. No one knows how to fix it when it’s campus wide.”

Just one night earlier, on Sept. 6, 2015, a power outage spread across Lakewood and Rocky River, two neighboring towns, according to Cleveland.com. It is unclear if these two instances were connected.

Ortenberg and her coworkers had called up to the supervisor on call, but the answer was unclear on what exactly happened. Meanwhile, outside of the first year residence halls, students gathered on the sidewalks, many of them around Raymond House.

First-year student Abbi Moss’ hair was still wet. Stuck in the shower when the power went off, Moss hurriedly wrapped up her routine and got out of the building. “I wanted to finish conditioning my hair,” Moss said. “And I did, in the dark.”

Others made the best of the situation outside of their rooms. First-year student Dori Nurzynski and friends broke out a deck of cards and played a few rounds of B.S. while they waited for an update. “We’re stuck for the night unless they can get us back in,” said Nurzynski.

Nurzynski is among the residents staying in Raymond, a building with updated key systems that accept Case One Cards instead of the typical swipe room key or hard metal key. When the power went out, the card readers stopped working, and the students were stuck outside.

Inside Wade Commons, the front door to the North Area Office was shut. Customer Service Assistant Janet Lanman was working when the lights turned out, and after a call up to a supervisor, she was instructed to lock the office.

After the power turned off, she overheard a student in the hallway upset over money lost in the WEPA printing machines. Lanman said that the main complaint in the offices later that night were WEPA-related.

At 10:22 p.m., just 22 minutes after the start of the black-out, the power returned to all buildings on the north side of campus. Shouts of joy could be heard from different areas as various buildings lit up once again.

Starbucks worker Dasharee Glenn continued to close up the coffee shop on the first floor of Village House 3A. After calling her manager, she was instructed to close early for fear of the register being unsecured.

Fourth-year students Bryant Jacob and Daniel Doherty had taken the opportunity to walk up Bellflower and see how far the damage of the power outage extended. According to the two, all the fraternity and sorority houses still appeared to have power during the outage, along with off-campus neighborhoods like Hessler. The campus buildings, however, appeared to have no power.

Further into the night, Wifi had not been restored in every building, even hours after the outage. No official university statement has been released.

Update Sept. 8, 11:29 a.m.: Additionally, Uptown Cleveland’s traffic lights and building electricity were reportedly out, along with the Triangle apartments. Third-year student Mahima Devarajan, a Triangle resident, said that the power remained out in the Triangle for about 45 minutes.

Update Sept. 8, 8:50 p.m.: Though the power was only out for 22 minutes on the north side of campus, it was out for roughly twice that time on the south side of campus. According to fifth-year student Jevon Montague, who was stuck in the Tippit elevator throughout the power outage, the south residence halls were out of power for 45 minutes.

Update Sept. 9, 10:02 a.m.: According to the university, the power outage was caused because of high demand in all of Northeast Ohio, which had led to other local outages the previous day. An update was not sent out to the students as CWRU staff were unable to understand the exact cause, and there was no useful information to share. According to a university statement, “The university is reviewing all aspects of the outage and response and will adjust protocols to address areas of improvement.”