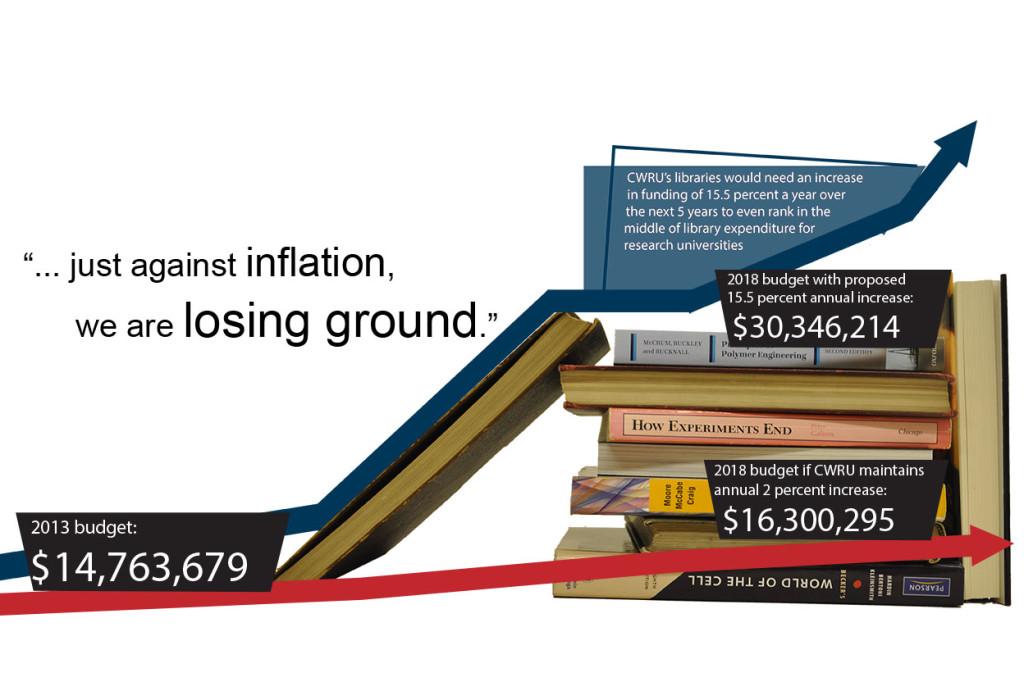 With the university in the middle of its strategic planning process, Case Western Reserve University is examining areas in which improvement and additional support is needed. One item that fits this description is hidden in plain sight; the university’s library system is one of the most underfunded research library systems in the country.

According to 2011 data collected by the Association of Research Libraries, the organization’s last rankings, CWRU ranks 103 in terms of library expenditure out of 115 research universities. The second lowest ranked private university on the list, CWRU only spent $15 million in 2011 on the library network, which is made up of four independent collections. While $15 million at first glance may seem like a significant amount of funding, this figure accounts for every library expenditure, including building maintenance and staff salaries.

In 2011 only about $7.5 million of the university’s budget actually went to the purchasing of library materials, with about $6 million of that supporting the right to access academic journals, an annually recurring fee. In other words, less than one percent of CWRU’s operating budget in 2011 went towards the purchase of physical library texts.

While currently solvent, if economic conditions for the library do not change, the quality of obtained materials may quickly deteriorate. According to associate provost & university librarian Arnold Hirshon, the price of obtaining print and electronic materials inflates at a rate between six and nine percent. Typically, the library receives only a two percent yearly raise in funding.

“Every year over the last five years, just against inflation, we are losing ground,” Hirshon said.

This problem especially came to light in 2011. That year, according to Hirshon, the university had to do some “fairly major cancellation” of journals and other databases. $550,000 worth of serials were not renewed.

This trend is beginning to concern those connected to the library. At last week’s Faculty Senate meeting, the Faculty Committee on the University Libraries presented a proposal for the “inclusion of a specific goal regarding the university’s libraries” in CWRU’s 2014-2018 strategic plan. The committee emphasized the need to increase financial investment in CWRU libraries so that by 2018, the university’s ARL Investment Index Score will move up to number 65, the median of all ARL research libraries, and that by 2023, CWRU will rank 45, the median of all private research institutions.

To accomplish this goal, the committee says that library funding must increase 15-20 percent every year over the next five years, well above the two percent annual raise the university’s library system currently receives.

The potential consequences of an underfunded library

According to the proposal, the committee feels that this issue is a key problem for the university to address since further degradation of the library system could “hamper the recruitment of outstanding faculty and students.” On top of the future impact a lack of library resources could hold, associate professor of electrical engineering and computer science and chair of the committee Frank Merat believes that the current funding situation is a more pressing matter.

“We’ve got to pay close attention,” Merat said. “I have had faculty that have told me that if their online database was no longer accessible here, they would leave. We really live and work by those electronic databases. That’s where you get all the current papers.”

Associate professor of history and law Kennith Ledford, who is sitting on the CWRU 2026 strategic planning work group and has been involved in library workings for much of his 21 years at CWRU, has felt the consequences of limited library acquisition funding first hand. In recent research with a graduate student, Ledford had to purchase around a dozen books since the materials were not under library possession. While he lauds the university’s ability to obtain inter-library loans, Ledford says the process of borrowing books can take up valuable time – a commodity that is especially valuable at the undergraduate level where semesters are short.

“Do I have to start dumbing down my assignments so my students can finish in the time they’re given?” Ledford asked.

Ledford says that especially for his field, it is imperative that a consistent funding source be found, so that the library doesn’t have “gaps in history.”

“The library is the laboratory for all of the humanities and the social science faculty,” Ledford said. “No one would think about closing the laboratories of the biomedical engineering professors or the biology or biochemistry professors.”

The history and cause of CWRU’s underfunded libraries

According to Ledford, low library funding is not a new problem: it has been an issue since the incorporation of the university. Ledford says that the predicament was further amplified more recently when “great austerity” was taken in the 2006 budget after the previous CWRU president announced that the university was facing a $50 million deficit on a $950 million budget.

CWRU then had to face the 2007 financial crisis, which certainly did not ease financial woes.

Currently, Ledford believes that the library’s funding method is at fault for not supplying adequate funding.

“[The problem] isn’t because anybody said, ‘let’s starve the library,’” Ledford said. “It’s because we haven’t changed the [funding] formula.”

The present formula “taxes” each individual school based on headcount. From a Kelvin Smith Library perspective, the varying schools contribute different amounts of funding per person pending on how much one of their student population uses KSL.

However, Ledford emphasizes that the division of the bill is not the library network’s main concern at the moment.

“The issue is that no one pays enough,” Ledford said. “I think all the arguments about whether is this the right method or if the actual head counts are correct is like rearranging deck chairs on the deck of the Titanic. There has to be more money.”

Further complicating the situation is the currently precarious state of OhioLINK, the consortium of 89 Ohio college and university libraries that CWRU shares library materials with. Members of the faculty senate libraries committee noted that while CWRU has been able to partially “offset the lack of local institutional content by being a charter member of OhioLINK, continued over-reliance” in the program “could leave CWRU’s library research resources extremely vulnerable.”

Hirshon agrees with this sentiment.

“Our problem has always been somewhat alleviated but also historically exasperated by the presence of OhioLINK,” Hirshon said. “For 20 years, we have been able to do some things that would not be possible if OhioLINK wasn’t there.”

Costs related to OhioLINK are split between the state and involved universities. In recent years, the state has provided less and less funding for the program, so the universities have had to pick up the cost.

For example, in December, OhioLINK stopped paying for access to Web of Science, an online database used across the university. OhioLINK had previously paid for the entire cost of the journal.

According to Hirshon, CWRU was the first institution to pledge money to keep the rights to Web of Science. Eventually 65 of the institutions signed on to contribute.
While the situation worked out in the end, Hirshon emphasizes that trend is worrisome.

“We can’t keep doing that, since the money we spend to keep something like that alive, which we did not have to spend before, is money that we are taking away from something that we could afford,” Hirshon said.

“As OhioLINK funding has become more uncertain,” he added, “it has kind of revealed the cracks in the wall that had always been there waiting to happen. Now we have to be more and more concerned.”