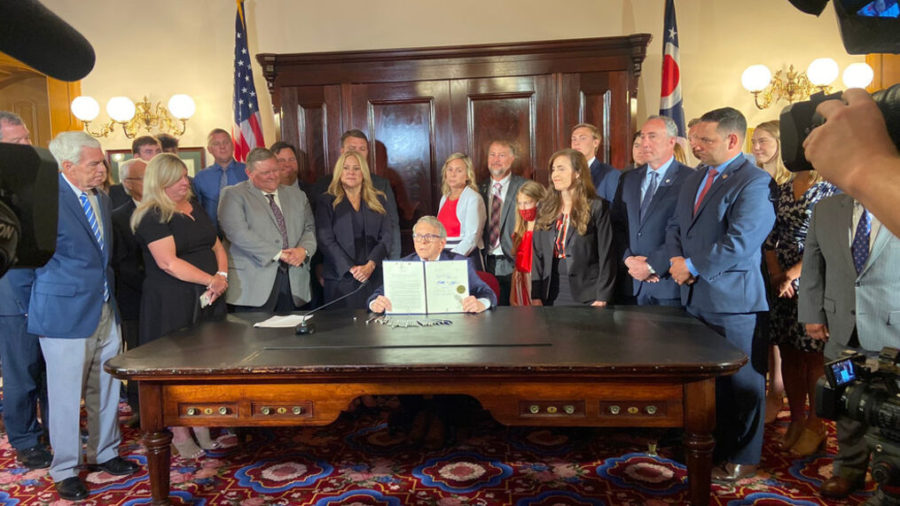 Collin Wiant's family were present for Governor Mike DeWine's signing of "Collin's Law," which forces universities to be more strict with hazing.

Hazing has always been a problem on college campuses, but a recent incident has increased scrutiny on the issue in the state of Ohio.

Collin Wiant was a student at Ohio University in 2018, where he was a pledge of the Sigma Pi fraternity. During the pledging process, he was given a canister of nitrous oxide, which he inhaled after being told to do so. After his brothers waited nine minutes to call emergency services, he died shortly after in the hospital. Sigma Pi was tried and eventually expelled from the university.

Due to this incident, along with many others, a new anti-hazing law, dubbed “Collin’s Law,” went into effect in the beginning of October 2021. This law makes hazing a felony in Ohio, the 11th state to do so.

How is this different from other hazing laws?

By changing the level of severity from a fourth-degree to a second-degree and expanding the definition of hazing to explicitly include drugs and alcohol, the new legislation makes jail time a real possibility for those who continue to participate in this behavior.

The law also includes a provision that colleges and universities within the state must include some sort of anti-hazing training and a requirement that requires reporting hazing, with those who neglect doing so subject to up to a $1,000 fine and 180 days of jail time.

Case Western Reserve University has recently released their tentative response to Collin’s Law in a nine-page draft from the desk of the Vice President of Student Affairs to members of the Student Presidents’ Roundtable (SPR), a group consisting of the leaders of the large umbrella student organizations.

The opening statement reads as follows: “The university prohibits hazing, and the support thereof, by all persons as defined in this policy and applicable laws and will investigate and respond to all reports of hazing. Students, student organizations, and other student groups, including other individuals associated with those organizations, are prohibited from hazing and failing to report hazing. Advisors acting in an official and professional capacity, or persons acting in an advisory role, are prohibited from permitting hazing or failing to timely report knowledge of hazing activity.”

The draft states that those who refuse to report or are involved in the hazing process are subject to suspension, expulsion, persona non grata status, termination of employment, the revoking of degrees, among other appropriate sanctions. Hazing cases will continue to go through the Office of Student Conduct and Community Standards.

Further, they intend to include an anti-hazing education module in the First-Year Experience and Family Programs orientation, similar to the existing modules surrounding sexual harassment and alcohol consumption. It will also be introduced in the Office of Greek Life, the Office of Student Activities and Leadership and the Department of Athletics.

Through this draft plan, CWRU recognizes the gravity of hazing and has outlined how serious of an infraction it is to the student body, bringing it into accordance with the new state law. Let’s hope these initiatives provoke needed conversations and an increase in reporting of hazing—as well as a decrease in hazing itself.