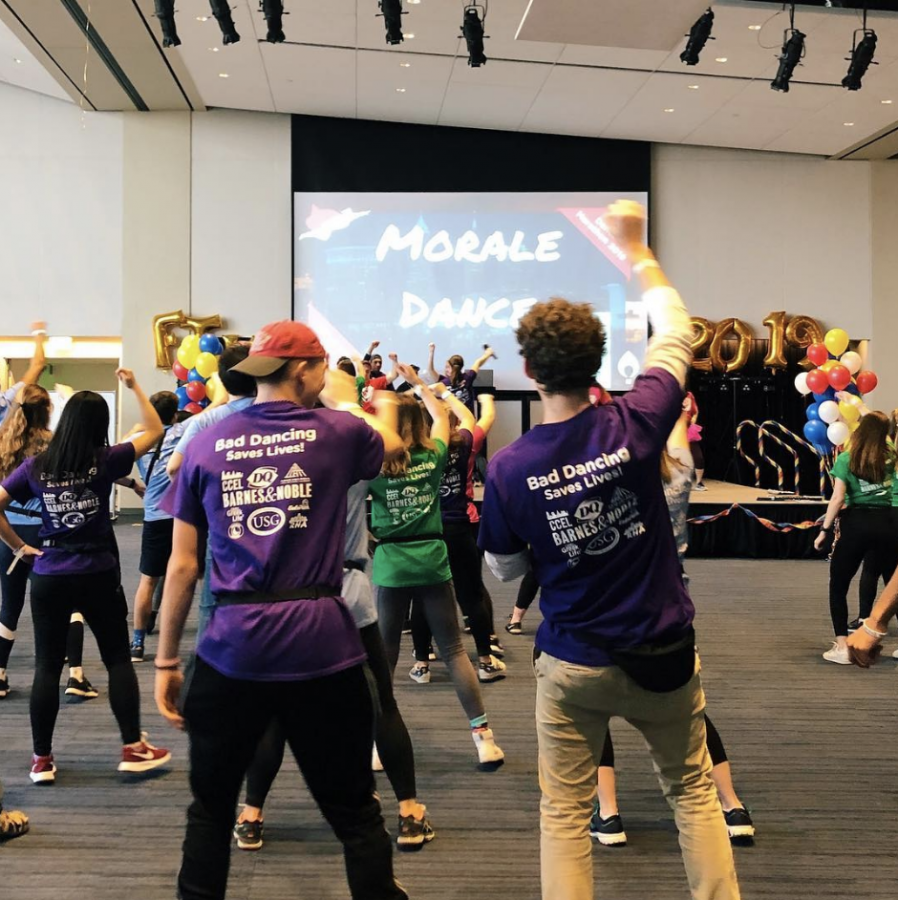 A high energy environment greeted participants of this year's Dance Marathon. During the annual event, students raise money and commit to 12 hours of dancing.

This past Saturday, Feb. 16, a few hundred dancers committed to staying upright for 12 hours as a part of SpartanTHON’s 11th annual Dance Marathon. Participants had fundraised throughout the year either individually or as a part of an organization. Dance Marathon is part of a national series of dance marathons taking place all across the country and was first held at CWRU in 2009.

The Dance Marathon is SpartanTHON’s premier event and a celebration of yearround fundraising efforts for University Hospitals Rainbow Babies and Children’s Hospital (UH Babies), a Miracle Network hospital. The Children’s Miracle Network is a nonprofit that raises money to help families cover medical costs that are not covered by insurance. This year, SpartanTHON raised $81,542.02.

SpartanTHON’s executive board and committees worked hard to make the event fun for all involved, including the Miracle Network families who were invited to the event. The Tinkham Veale University Center ballrooms and the surrounding area were decked out with ribbons, balloons and other decorations, giving the event an exciting atmosphere.

Dance Marathon participants were sorted into eight teams of different colors that participated in mini-competitions throughout the event. Teams gained points by winning contests, and at the end of the event the team with the most points won. Most of the teams were comprised of Greek Life chapters or other organizations that had fundraised as a group. In the past, teams had been created randomly, but this year SpartanTHON executives decided to keep organizations together to promote team spirit.

Fundraising also occurred within the event. One touching moment occurred during fundraising, when the Kangas family, a Miracle Network family, auctioned off artwork their kids created. All three kids had been born prematurely and stayed at UH Babies for their neonatal care. Bidding for one piece of art reached $50.

Emily Kilmartin, a fourth-year student and SpartanTHON’s overall director, believes peer-to-peer fundraising, like what happened during the Dance Marathon, is one of SpartanTHON’s biggest strengths because it builds a base of students in the university’s community that can talk about SpartanTHON and its efforts.

Kilmartin also stressed that “SpartanTHON is a 365 day movement.”

And even though a successful season of fundraising has been completed, “[SpartanTHON’s] efforts never end.”

In addition to the Dance Marathon, SpartanTHON organizes other fundraising and awareness-building events. One such event is the Color Run, a five kilometer fun run that occurs at the beginning of the fall semester. SpartanTHON also held a campaign for Child Health Day on Oct. 7 to raise awareness for UH Babies’ Angie’s Institute, a cancer institute for adolescents and young adults. SpartanTHON built a rainbow arch made of balloons in the middle of Kelvin Smith Library Oval to raise awareness of the institute.

Jessica Amalraj, SpartanTHON’s outreach director and a third-year student, has been involved with SpartanTHON since her first year at Case Western Reserve University. She describes SpartanTHON as “the most meaningful part of my [CWRU] experience.”

This year, Amalraj said she was particularly struck by the importance of the work SpartanTHON does.

“I was once again blown away by the direct impact SpartanTHON has in giving the families at [UH Babies] lifesaving treatments, funding research that will save millions of kids battling pediatric illness, fantastic child health specialists that the hospital cannot afford on its own and technology that makes miracles happen at the greatest children’s hospital in the nation,” she said.

Most importantly, the Dance Marathon reminds participants that they are truly making a difference in the Cleveland community.