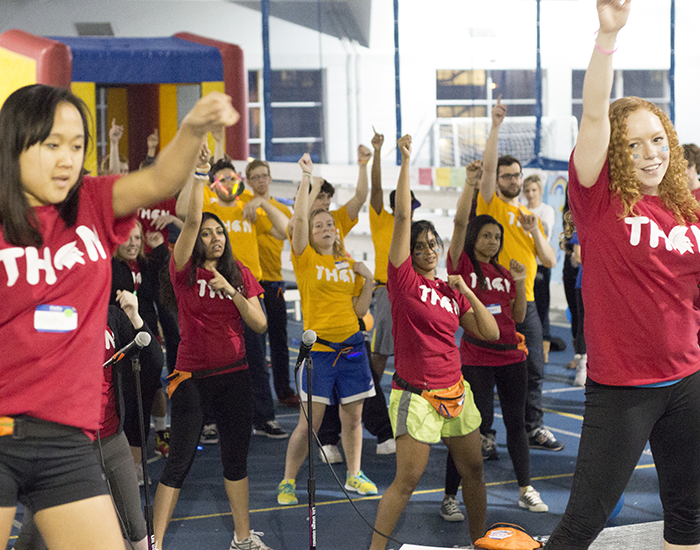 Dance Marathon participants danced the day away on Mar. 2. The event raised $18,000, twice as much as last year, for Children’s Miracle Network.

On Mar. 2, the main gym in the Veale Convocation, Athletic, and Recreation Center suddenly became a place for exciting music, nonstop dancing, and smiles all around. From noon to midnight, SpartanThon took over the center and never looked back.

A fundraising event that benefits Children’s Miracle Network and, by extension, Rainbow Babies, Dance Marathon is an event put on by the student organization, SpartanThon, that had students dancing the night away while earning money for charity based on how long they danced. Individuals and whole student organizations alike were encouraged to participate.

“It was very exciting to be part of a young organization that is starting to really gain traction on campus,” said executive board member Allen VanMeter, enthusiastic about SpartanThon. “It was a large challenge rebranding our organization from Dance Marathon to SpartanThon and making it one of the most entertaining and rewarding marathons for the dancers who committed to the 12 hours.”

“I feel Dance Marathon was a huge success,” said VanMeter. “We more than doubled last year’s fundraised total and had much more interest from campus. There was also a greater emphasize on programming. We had more fun activities like human-sized Jenga and the morale dance that was performed at the top of every hour. We saw a huge increase in the number of people dancing for the 12 hours as well as attendance throughout the day.”

“My favorite moment was probably learning that we raised $18,000 at 11:00 p.m. and the executive board trying to contain the overwhelming excitement and pride for the big reveal at the end.”

Looking ahead, members of SpartanThon are excited for Dance Marathon’s and their organization’s futures. Earning more than twice as much as last year, the group is enthusiastic about future marathons.

“I hope and know this event will only grow in the future,” said VanMeter proudly. “With the increased interest we are getting from the Case Western Reserve University campus and the awesome, talented freshman class in our general body, the organization will only keep improving. Years down the road, I see many more organizations participating as dancers, the fundraised amount only getting larger, and the entire campus uniting behind this cause.”