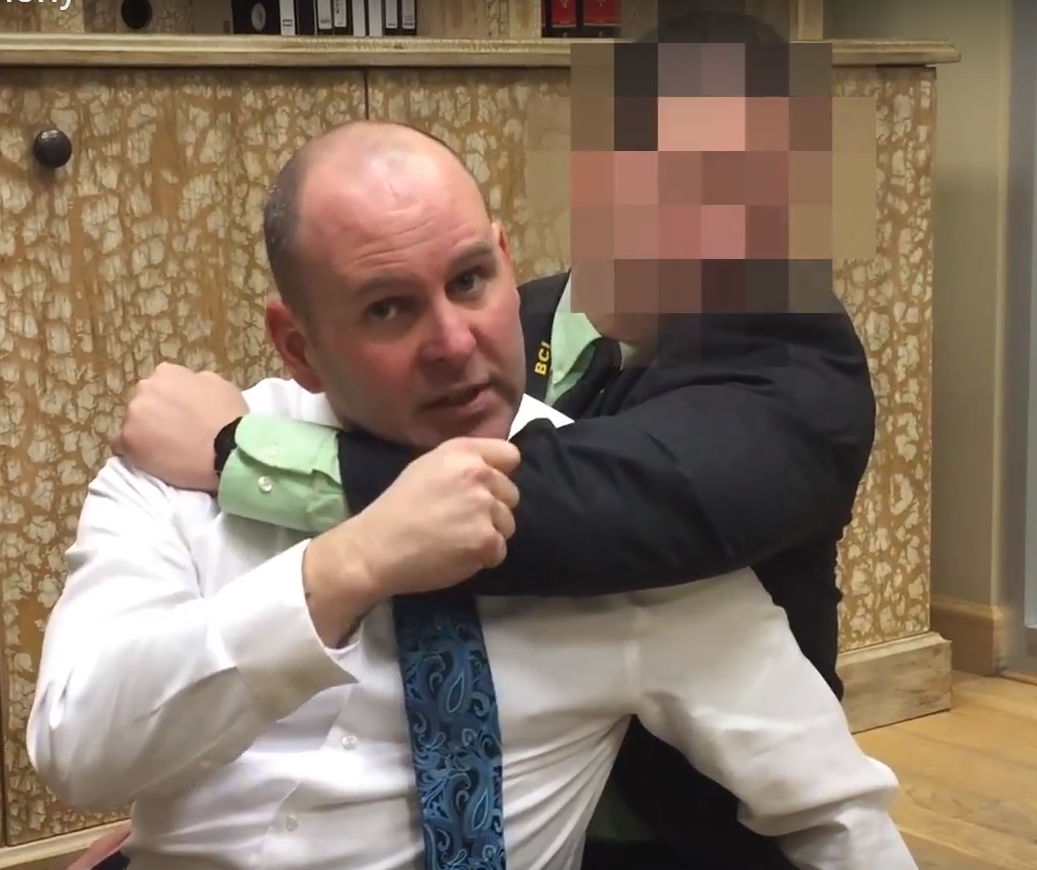 Faces blurred by Bureau of Criminal Investigation in the release of the testimony. Hudson Police Officer Ryan Doran acts out his account of the encounter that led him to shoot Alameri five times.

Editor’s Note: Readers should be aware that a photo published alongside this article depicts a staged act that appears violent. The photo may be disturbing to victims or witnesses of violence. Photos that promote or encourage violence do not pass the publishing standards of The Observer. In this case, an exception was made, and this photo was published alongside this article for logistical reasons.

The United States Attorney for the Northern District of Ohio’s Office plans to review a letter sent by Case Western Reserve University law students and faculty to the newly appointed Attorney Justin Herdman.

The petition urges him to review the circumstances of the shooting five times and killing of Saif Alameri at the hands of Hudson Police Department Officer Ryan Doran, a spokesman for the Northern District told the news to Cleveland.com last month.

A Summit County grand jury declined the chance to bring charges against Doran last month, resulting in the CWRU Law community coming together to fight for their deceased classmate. Though a review of the letter provides a glimmer of hope for future legal options, the office reviews every letter it receives.

The letter has received nearly 60 signatures from Juris Doctorate candidates, faculty, and staff members. It was drafted by second-year law student Elizabeth Connors and takes issue with the the officer’s explanation of events and the subsequent local media response.

One of the letter’s editors, third-year law student Taru Taylor, explained more about the efforts within the law school to get the state to reopen the investigation into Alameri’s death. He believes that the school has a lot of support from the community, but says that it remains to be seen whether the letter will have an effect on Herdman.

“Professor Lewis Katz and also Michael Benza, they both teach criminal law at the law school,” Taylor said. “And they recently have been more direct about those issues surrounding the case. But we are disappointed that the president of the school has yet to say anything about this. President Barbara Snyder has been totally silent.”

Both Katz and Benza voiced concerns about the handling of the case last month and asked the Northern District Attorney of Ohio’s office review the case. President Snyder has not issued a personal statement, though the university has.

Taylor originally put pressure on the School of Law in December 2016 by organizing a different letter urging the school to take a stronger stance and question the facts surrounding the encounter between Alameri and Officer Doran. Their initial statement expressed empathy and sorrow for the loss of the Alameri family, but did not question the account of the events given by the Hudson Police Department. Now, Taylor describes the community as “galvanized” behind Alameri.

“A narrative focused on blaming the victim has been built around Saif. This narrative began immediately after his killing. It included news reports that highlighted other alleged alcohol and marijuana use by Saif in the days and weeks leading up to his death,” the letter states.

When each outlet broke the news of Alameri’s toxicology report, they acknowledged the uncertainty surrounding the role that marijuana played in the car crash and subsequent encounter with Officer Doran. Despite being unsure of its relevance to the case, headlines across local publications such as the Akron Beacon Journal and Fox 8 News implied Alameri was impaired by the drug at the time of the crash.

Witnesses saw Alameri flee from the crash across 3 lanes of the highway, into the woods where the encounter would soon ensue between him and Officer Doran. One of the witnesses, David Hamsher, told Fox 8 News that Alameri fled from the car with “his arms flailing over his head.”

In this light, the letter turned from criticism of media coverage to both the account and actions of Officer Doran.

The Ohio State Attorney General’s Office released Doran’s video testimony recalling the struggle between him and Alameri. Doran recalled that as he was pursuing Alameri; he turned and knocked him to the ground. Alameri ignored his orders to stop and attacked him from behind. Alameri struck several blows on the back of his head, and Doran claimed to have felt tugs on his gun and his belt while Alameri was on his back.Though corroborated by forensic evidence, the letter’s signees are not buying the officer’s side of the story.

“The officer had 14 weeks to craft his statement of the facts. He had 14 weeks to come up with the story that he ended up presenting,” said Taylor. “And it’s problematic that Saif is not around to give his side of the story. So that’s also why we asked for federal investigation.”

Prior to the physical altercation, the dash camera footage shows Doran hopping out the police cruiser and pursuing Alameri with his gun drawn. While the two engaged in a fight at close range, the letter argues this occurred because of the officer’s own actions, creating an environment where Alameri felt threatened after sustaining possible injuries after a high speed car accident.

“He treated him as a criminal. Immediately. When he had just been in a car accident 20 minutes before the police officer encountered him,” Taylor said.  “He was disoriented, the things you would expect from someone who had been in a serious car accident. He should’ve been treated as someone who needed help.”

According to his own testimony, Officer Doran initially pursued Alameri with his gun drawn in hopes of making the arrest easier, but not because he feared for his life. Because of this, the letter questions Doran’s conduct, arguing that he needlessly and carelessly escalated the situation between himself and Alameri.

“De-escalation is important in that situation.” said Taylor. “Just looking at the video, it seems unreasoable.”

Though no response has been received from the letter, Taylor remains hopeful that District Attorney’s Office for the Northern District of Ohio will review the case.

“This is a constitutional issue,” said Taylor. “…Where was the due process of law here? Now, due process, a fundamental part of that is the presumption of innocence…That means that persons, whether citizens or noncitizens, regardless, have the right to life, liberty, and their property…What this suggests is that as a person of color, Saif did not have a right to his life.”