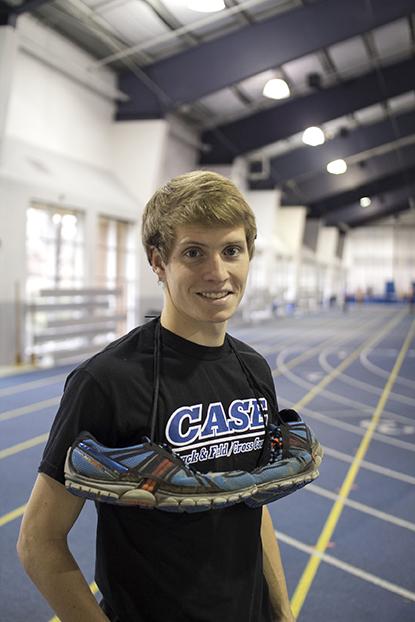 Senior David Dixon is in the home stretch of his time here at Case Western Reserve University, and he’s looking to end on a high note. As a mechanical engineering major, Dixon has been hard at work: keeping his grades up, taking advantage of research opportunities, being an active member of the Sigma Phi Epsilon fraternity and competing in track and field as well as cross country, where he was selected as a co-team captain and had a 68th place finish out of 220 runners at the National Collegiate Athletics Association’s national meet.

“I feel like I was prepared and comfortable running this year. I had done a lot of work getting faster and improving my fitness trying to make it to the meet, so I’m happy with the result.” Like his path to the national meet, Dixon has been working steadily to this moment, staying on track for graduation and a potential career in the field of renewable energy. His passion for engineering along with the desire for a smaller university community influenced his decision to attend Case. “When I visited Case, it was such a different feeling…like they actually wanted me to come here instead of just being another number. I knew then that this was where I wanted to go. I don’t think I would have been as happy anywhere else.”

Originally focused primarily on academics, Dixon decided to meet with cross country head coach Kathy Lanese on a whim during his campus visit. Lanese and the team went the extra mile making Dixon feel welcome with a team meet-and-greet during his visit. “It probably played a big part in why I felt Case was the right choice. I showed up at the indoor track and coach had gotten together a big group of people to come say hi and tour me around Veale where I got to talk to another one of the athletes who ended up being one of my really good friends.”

Overall, Dixon feels he made the right choice. His experiences here at CWRU include two NCAA national meet appearances in cross country, four selections as an all-UAA academic team member and, a personal highlight for Dixon, getting to climb the wind turbine in front of the Veale Center. “My freshman year is when we built the wind turbine on campus. I just thought it would be really cool to climb it. I had a class that following fall with Dr. Matheson who is in charge of the wind turbines. I set up this research project and he asked ‘would you want to climb it?’ ‘Absolutely!’ So I got to do that a few times. That kind of fueled my interest in renewable energy and it works well with mechanical engineering.”

Dixon has definitely made an impression among his teammates as well as his path to the turbine, since he led by example when co-captain. He had his sights set on a leadership role ever since serving as a captain on his high school team. Aware of the challenges that come with being a team in transition, Dixon focused on keeping the young team confident and consistent during the difficult season.

“I guess the theme of the season was being able to roll with the punches and deal with everything without being shaken. For the captains to have that perspective and mindset and be able to convey that to the rest of the team is something that helped a lot. Not to get too worried about conditions or how you ran last race, but move on and focus on getting out there and competing. I think that being stable is something I thought was helpful to the team.”

Dixon worked to help build the team chemistry with the young runners, an aspect of cross country that is often overlooked due to the individual nature of racing. However, Dixon believes that the relationships seen in cross country are more developed than in most other sports. “Just the fact that you can go out on a run and talk with someone for an hour. Whether it’s a really long run or a hard workout, you’re going through the same thing together. Other sports, not everyone’s doing the same thing. You don’t get that same experience. In cross country, everyone’s working towards same goals both individually and as a team. You get into a collective mindset.”

Lanese saw the potential for growth in Dixon when she noticed his focus and drive. “He’s one of those kids who never took a shortcut on anything he did. He improved every single year. I’ve been so impressed with his composure and how he worked on his skills and fostered them to success. He has a goal and followed through.”

When Dixon graduates this spring, he’s looking to keep doing things right, hoping to gain some work experience as an engineer before considering a return to academia. Primarily focused in the field of renewable energy, he looks to make a difference in his community.

His tenacity and determination will be sure to help him find success in this critical field as he moves on as a CWRU alumnus.