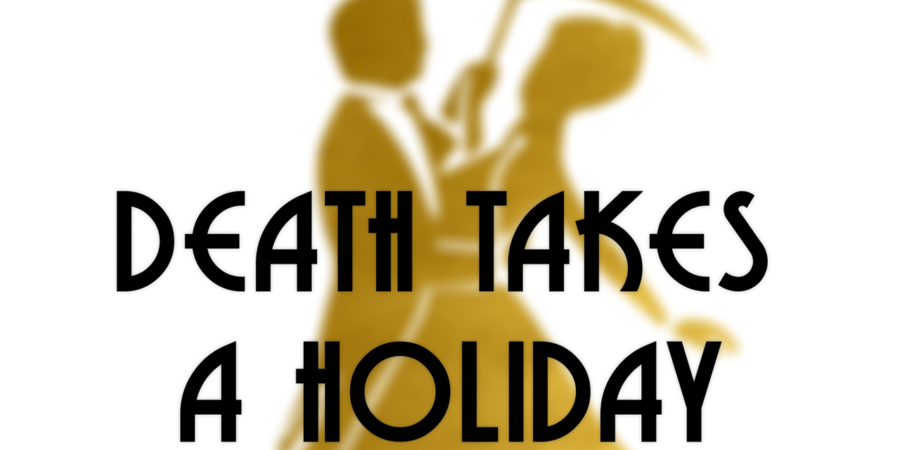 The Footlighters' latest production, "Death Takes A Holiday," marks the groups second live production since the start of the pandemic, telling the tale of human emotions and death in Italy.

Thwingo, the student-favorite weekly bingo game, had just ended in the atrium of Thwing Center on March 24, and students were preparing to leave when one of the event organizers announced that in the center’s ballroom just above them, “Death Takes a Holiday” was about to begin. Those interested scrambled up the staircase to the check-in table just outside the four big doors of the ballroom to claim their ticket. Just inside, actors rushed around the backstage area to get ready. Some sat in the green room just below the stage, tricked out with a TV and snacks. Others stood in the wings, admiring the beautiful set that made up the Italian villa where the story takes place. Crew members held their stations on the perimeter of the performance’s seating, ensuring that every single one of the show’s cues were in place. Musicians took their places behind their music stands, preparing to play the show’s score. On the third floor, overlooking this organized chaos, stood the eager spotlight operators, ready for the show to begin. The energy traveled through the entire building, and the show hadn’t even started yet.

The Footlighters, Case Western Reserve University’s student musical theater group, has been performing on campus since 1998. They’ve put on a range of musicals, from classics such as “Into the Woods” and “RENT” to lesser-known musicals like Stephen Sondheim’s “Merrily We Roll Along.” This semester’s “Death Takes a Holiday” is also rather niche—the original production unfortunately didn’t make it to Broadway, but it still found its own popularity in underground settings, becoming a cult classic. The musical is adapted from a 1920s play by Alberto Casella, depicting the heartwarming story of the soul of death desiring to experience human emotions. Death, in the body of a prince, asks one simple question in this piece—why are humans so afraid of death? The original play came in the wake of the first World War, responding to the exhaustion and grief that many felt after having lost loved ones.

For many years, The Footlighters have found their home in the Thwing Center’s Ballroom, filling the carpeted floor to the brim with seats and tech equipment. Just next door in Thwing 224, the orchestra sits with microphones at each of their music stands, providing a live underscoring to the live performances taking place next door. The actual set itself was a work of art; the pillars and windows between truly gave the illusion of an open Italian household. From just a normal ballroom, the room transforms into CWRU’s own little Broadway theater when The Footlighters come to stay. To top it all off, CWRU students get attendance to every show the group puts on for free, allowing everyone to soak up the magic that pervades the space when the actors land on their marks.

The piece, directed by Shaun Furter—who previously played Franklin Shepard in last semester’s production of “Merrily We Roll Along”—had four performances from March 24-26, including the group’s tradition of the “midnight performance,” which takes place on the Saturday night. Typically this late-night performance is a big celebration for the cast; they let loose and allow jokes and improvisations to occur naturally. The return of live performance has allowed for such traditions to be preserved. This show is only the group’s second performance since the pandemic began. At the height of the pandemic, The Footlighters’ time was instead spent on virtual productions that allowed actors to continue doing what they loved, despite not performing live. The earnest story of “Death Takes a Holiday” therefore came honestly to the performers; now that they get to be back on stage, each performer is giving their all to the show, making it clear how much they are glad to be back to such an environment. Even a passerby who might have peeked through the open ballroom door could have seen the wonderful, heartfelt acting coming from the stage. They might also have heard the resonant singing coming from the cast, which reverberated throughout Thwing. On opening night, even The Jolly Scholar’s weekly “Karaoke Night” had to compete with the passionate performance of The Footlighters’ cast. This can only speak to the performance and passion of the group. May they perform live for years to come.