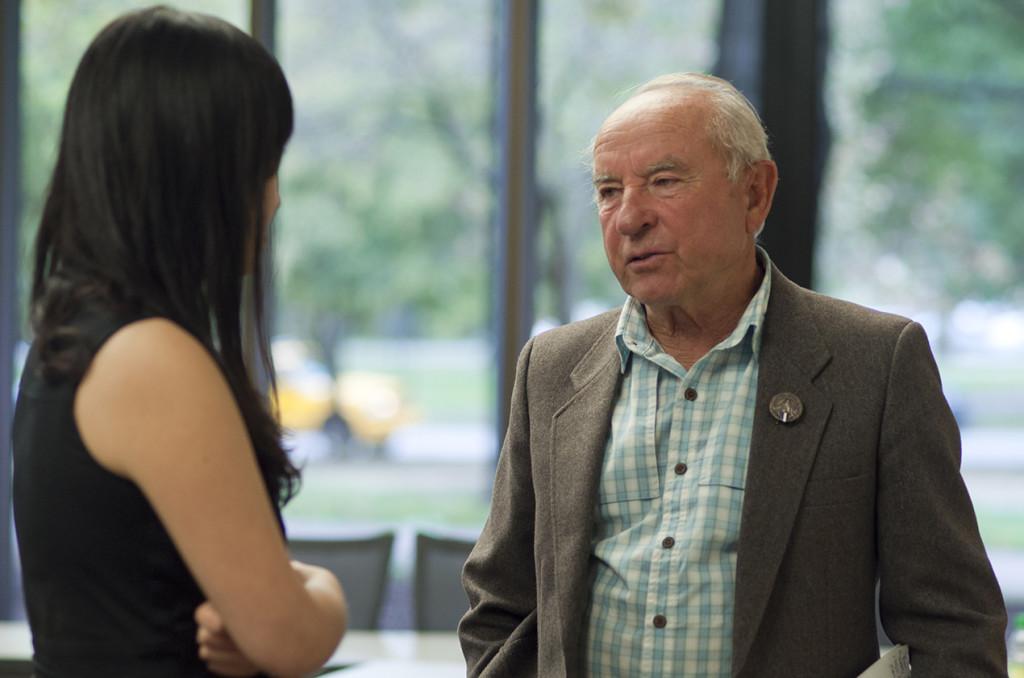 Yvon Chouinard speaks to an attendee of his panel session last Friday. Chouinard is an avid environmentalist and his company, Patagonia, has donated one percent of sales to environmental groups since 1985.

Yvon Chouinard and TM Herbert weren’t setting out to make history when they made their first continuous ascent of a then-unnamed climbing route in Yosemite Valley. They weren’t expecting their nine-day climb of Muir Wall to become something young mountaineers would ask them about decades later. And they definitely weren’t expecting their “leave-no-trace” approach to climbing to redefine the standards of modern alpinism.

The thought running through their minds was simple: “What next?”

In 1964, Chouinard, Tom Frost, Royal Robbins and Chuck Pratt made the first ever continuous ascent of an El Capitan climb (the North American Wall). While arduous, it was also an experience that proved to the group just how long they could spend living on a climb. They found their bodies and minds adjusting to the task—able to make the climb even after a night of uncomfortable sleep, a day of less water or less food.

“We reached the summit,” Chouinard writes in The American Alpine journal, “feeling as if we could go on for another ten days.”

And so, in 1964, after their first one-push ascent on El Capitan, Chouinard and Herbert decided to make their next one. This time with only two men, the risk would be more, the challenge greater. But Chouinard and Herbert were—and are—the kind of men who are always looking for a new challenge. Consummate athletes, they were never satisfied with something easy.

“When you’re really good at a sport,” Chouinard said, almost 50 years later, “you simplify it.”

Chouinard knows a guy who spears an elk every year. He himself is skilled in tankara fly fishing—a Japanese form of the sport in which you really only use a pole and a line—no reel, no high-tech additions; just a man with his rod. And he and his friends reinvented modern rock climbing in the year 1965—not by making a climb in record time, not by hammering steel pitons permanently into the cliff face using siege tactics—but by scaling their new challenge with as little equipment as possible. By free-climbing wherever possible; and when aid climbing, using safety equipment that wouldn’t scar the rock. By leaving no trace behind.

It’s a big part of the reason that he was selected as this year’s Inamori Ethics Prize winner.

Patagonia’s mission statement is, like many other things in Chouinard’s life, simple: “Build the best product, cause no unnecessary harm, use business to inspire and implement solutions to the environmental crisis.” For the most part, they’ve been overwhelmingly successful. But the road to sustainable business practice wasn’t always easy, according to Chouinard.

When asked about the challenges he faced in running his company, Chouinard answered by talking about one of the darkest points in Patagonia’s history. A single spring in 1991.

When the economic recession hit, the bank called in Patagonia’s loan. The incredible growth that had put once put Patagonia on the cover of Inc. Magazine now put the company so deeply in debt that they had to lay off 20 percent of their employees trying to compensate—20 percent of their friends.

“That’s when we reassessed what we were doing,” Chouinard says, “and we decided to put our business on a hundred year basis, make all decisions as if we were going to be here a hundred years from now. That changed our whole attitude, and then after that we really started examining the way we were doing business, as far as using industrially grown cotton and all of that stuff.”

Since 1994, Patagonia has been making steps forward every year in cleaning up their production line. Their first year, 1994, was the year they decided to make the switch to organic cotton. “One question led to another question,” Chouinard says.“We had to ask about dyes, well are dyes toxic? We didn’t know.”

They decided to find out. Patagonia is not a company that ignores environmental problems brought to their attention. Since 1985, they have been donating one percent of their sales (or 10 percent of their profits, whichever was higher) to environmental groups. Every year, they give 750 grants to various non-profit organizations. They don’t follow every dollar they spend, but for Chouinard, its easy to see how their donations are helping. When asked if there are any concrete effects he and the company can appreciate, he recalls an example quickly.

“There was a dam on the Quinibeck River in Maine,” he noted, “and the local small NGOs wanted to take it out. It was worthless and did a lot of damage. And it was a local issue, so it got nowhere. I think we spent 70,000 dollars, came out with an ad in a national edition of The New York Times about taking out the dam, and made it a national issue. And it’s gone,” he laughs. “And the fish have come back.”

“There’s no victories in the environmental movement,” Chouinard continued, “…but when you can take out a dam, that’s a concrete victory.” He laughed. “So to speak.”

Yvon Chouinard didn’t set out to become the owner of a major outdoor clothing company. In fact, his first forays into entrepreneurship started in the back of his car. In the 60’s, Chouinard was making and selling his own steel pitons, driving up and down the Californian coast to find new mountains to climb, and living from penny to penny. And even though the scope and direction of his business has now changed, the spirit of it remains the same.

“We don’t have cubicles at work,” Chouinard said. “If I had to work in a regular business, I’d go nuts. So what I did is I made a business that I enjoy going to work at. And you can do that.”

It’s true. Employees at Patagonia treat each other more like family than like co-workers. They go surfing together at lunch. The flexible work-hour schedule means that they can take time off to go climbing or to volunteer at a non-profit organization. But regardless of where they go, or what they do, they do it together.

“We never knew where we were going,” Chouinard said, speaking once more about his business, “just took it one step at a time.”

Chouinard was initially hesitant to accept the prize. He doesn’t feel a pressing need to be recognized for his achievements in environmental awareness or sustainable business practices. He’s ready to retire, he says.

“I’m almost 75 years old and I feel like I’ve done what I set out to do. It’s time for me to pass some of the baton on to other people. You know, I want the company to receive the award, not me personally, because it’s the people working there that are doing the job.”

And what would he rather be doing?

“Fishing,” he replied with a laugh. “I’d rather be fishing.”

When asked, Chouinard says Muir Wall is probably the most challenging climb he’s ever done.

“Nine days hanging in hammocks,” he said. “When we got to the top we were pretty wiped out.”

Chouinard speaks of his climb casually. At 74, he’s been climbing mountains for most of his life. So it makes sense that his experiences have impacted how he lives. When you climb, Chouinard said, “You’re losing yourself, just like any artist. And you just forget about time and space. I mean, if you don’t concentrate, you’re dead.”

Chouinard doesn’t see a problem with that. The rewards far outweigh the risks.

“When I was young,” Chouinard noted, “the reward was pitting yourself against the adversity, and just, you know, becoming a stronger and better person…the spiritual values of it, really.”

Chouinard considers himself a Zen Buddhist—it’s the simplicity of the philosophy that appeals to him.

He doesn’t own a cell phone. He doesn’t own a laptop. He doesn’t worry about getting the newest edition of something every year. For Chouinard, necessity is simple: clothes, food, shelter. He lives a minimalist life—emulating personal heroes like Thoreau and Emerson.