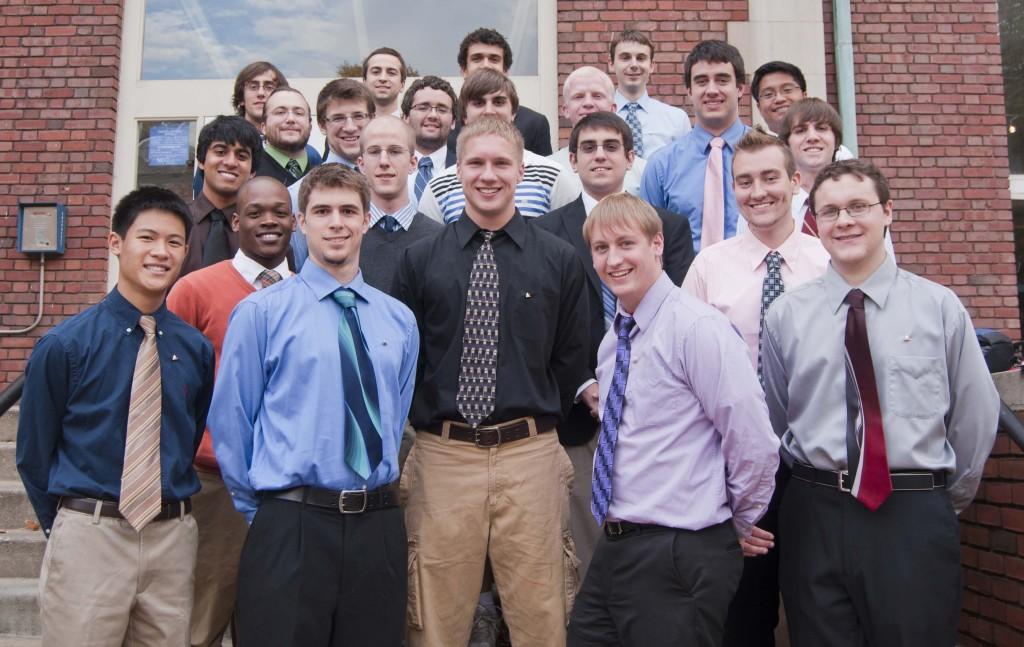 After an intensive recruitment period, the Delta Chi colony has taken form at Case Western Reserve University. The fraternity has officially welcomed 24 founding associate members, most of whom are sophomores or upperclassmen. Despite only being together for a few weeks, the soon-to-be brothers have already begun to form bonds of loyalty and friendship. “I feel like I haven’t laughed as much as I have with these guys in my life,” said sophomore Sean Sukys.

The new colony has charged onto the CWRU community, steadily integrating themselves with campus life and Greek traditions. They have already begun supporting other Greek chapters through participating in their philanthropic events, such as Sigma Phi Epsilon’s 24-Hour Flag Football and Alpha Chi Omega’s domestic violence awareness week kickball tournament, in which the team took first place. President Evan Malone voiced the colony’s interest in partaking in future philanthropy events as well.

Delta Chi has also been working to introduce themselves to CWRU. As PR Chair, Sukys recently helped to organize one of these introductory efforts, during which the associate members gave out white carnations and complements to students on campus. This effort happened to coincide with Delta Chi’s Founder’s Day, so the group intentionally chose to distribute their flower to honor their fraternity’s history.

Earlier this fall, Delta Chi representatives extended the call to brotherhood to men across the campus, talking with sororities, residence life staff and random passersby on their way to class. Using the feedback of the campus community, they contacted various men who they believed would epitomize their mantra of social excellence.

“During the course of our five weeks here, we intermittently came and conducted individual interviews with over 70 gentlemen,” Delta Chi representative Dan Thompson stated. “We also coordinated events to get people to meet each other – we wanted to make sure that the cohesion was there to make a dynamic group.” Following a final follow-up meeting, Thompson and other representatives extended invitations to become Founding Fathers of the chapter.

The experience of founding a chapter of a fraternity is atypical. Not only are the associate members responsible for defining their fraternity, but they must do it in a considerably condensed period of time. Contrary to a common new member process, which would involve eight to 10 weeks of orientation and education, Delta Chi’s process for the Founding Fathers will only lasts for six. Furthermore, each new member of Delta Chi will be assigned a co-brother in lieu of a “big,” although many of the members joked that Thompson served as their collective “big.” Co-brothering allows for accountability and camaraderie to form between the brothers. Following their upcoming initiation, the brothers will then help to induct a new pledge class in the spring of 2011.

Each new member elected to join Delta Chi for their own reasons, but the opportunities and potential of the new fraternity resonated with all.

“I like the idea of leaving a legacy here at CWRU,” said Malone. “I’m graduating in May, so I want to give something back to the community, something that will last.” His words prompted quips from the other members that Malone would be enshrined on the fraternity’s mantelpiece as soon as they acquired a house. But after the jokes, the other members shared his sentiments about joining.

“It’s a chance to fulfill a role on campus that really isn’t there,” said Sukys.

“There was this hype on campus,” explained sophomore Stephen Redford. “I was interested in the potential of the new organization on campus.”

For Malone, the decision to join Delta Chi began as an individual initiative. “I heard about the fraternity coming to campus, and in my mind Greek Week was flashing and I got a little excited,” he said. Eventually, he also convinced some of his close friends to join as well. Sukys also joined with three of his best friends, wanting to create their fraternity experience together.

The members’ initial discussions regarding the identity and future of the fraternity resulted in a strong interest in classicality. “We want to be the gentlemen on campus,” said Redford. Sukys expanded on Redford’s thought, expressing a need for a revival of chivalry. “A lot of people these days don’t understand what that is. It’s something that you should do. This is what you’re going to see from us,” he said.

The members also expressed a shared value of demonstrating citizenship and integrity through actions within the community. “Leading by example is important to us,” said Malone. In this ideal, the new members are becoming closer with the fraternity nationally, and have met with other brothers and fraternity alumni to witness their impact on the community.

The future goals and endeavors of Delta Chi are still fairly open. While they have been very ambitious to assimilate with the CWRU community, they are understandably young in their development. Many of the members just accepted their bids within the last three weeks and chapter meetings began only two Sunday’s ago.

“We don’t have specifics, but we’ve laid the groundwork,” said Ben Abbott. This groundwork has included the establishment of officer roles, creating leadership opportunities for many of the members. Redford spoke to the colony’s excitement about the future. “[Our] aspirations are very high for how we want to affect the overall community.”

“We have a vision and a group of men who can go about this mission,” Abbott said.