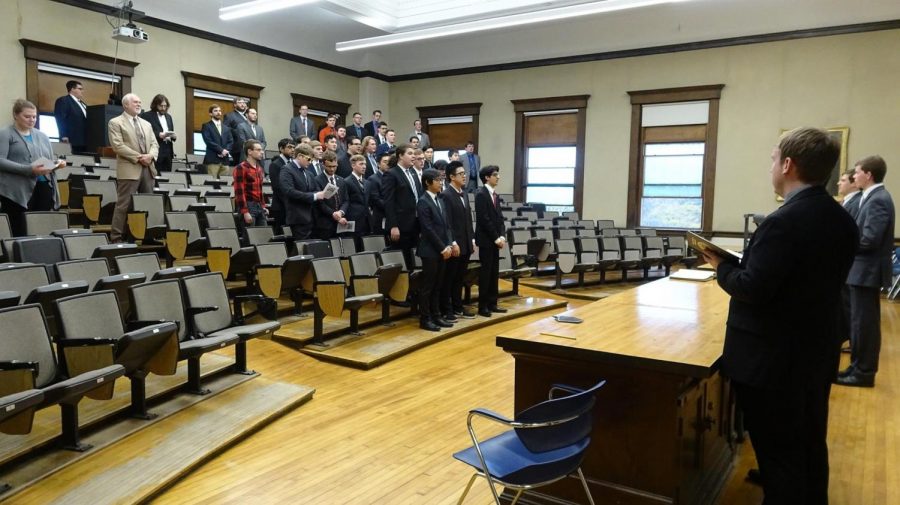 Delta Upsilon inducted three new members publically Nov. 3-4. For the first time, the ceremony was streamed live on Facebook so that family members back home could tune in.

The Western Reserve Chapter is the fifth chapter of Delta Upsilon founded, and along with 75 other chapters of the fraternity in the U.S. and Canada, they have everything, including the oath associate members take at initiation, out in the open.

Rob Stark, President of Delta Upsilon Western Reserve Chapter, is proud to be public. To him, it is the right thing to do, both because it allows them to demonstrate their values, and because it holds them accountable.

“Being non-secret means that any aspect of the fraternity is open to public scrutiny,”
Stark said. “We don’t believe in hiding our values and what we do behind childish secrets. The whole reason Delta Upsilon was founded was to be an antithesis to the secret societies that hide behind closed-door rituals and proceedings. We believe that being non-secret allows people to truly see what DU has to stand for, and hold us accountable if we aren’t upholding what we say in our Ritual. We are the only fraternity that can openly quote anything in our entire Ritual to show that we are upholding our values, which I believe is really the only way.”

Minh Pham, active member of DU, agrees that the non-secret aspect is unique and strengthens the bond he feels with his fraternity.

“Non-secret strengthens the sense of community because being able to share your values and beliefs with others and to spark interest is very important to me.” he said.

Stark thinks the non-secret essence of DU helps with recruiting like-minded people, and can be a huge draw for new members because it’s radically different from any other Greek organization. He said that DU invites Potential New Members (PNMs) who are considering joining to come witness the initiation and give themselves peace of mind.

Pham said that the fact DU is non-secret greatly influenced his decision to join. But according to Roger Pan, a newly-initiated member of DU, non-secret was not crucial in convincing him to join.

“The non-secret aspect is not a big influence for me in joining a fraternity,” said Pan. “For me it just sounds cool [to be public].”

However, it wasn’t necessary to attend in person. For the first time, DU livestreamed their Initiation on Facebook.

Drawing on his own experience, Cooper thinks initiation marks an important milestone for the associate members. He finds it heartwarming to watch the initiated men starting what he called a “life-changing journey” and hopes that they will get as much out of the experience as he has.

Pan attests that he really enjoyed Initiation as an associate member. He said he did not feel nervous at all, and found it to be fun.

“My favorite part of initiation is Rite II,” said Pan, “when we got our official pins and… everyone started screaming… Everyone was really enjoying themselves. Taking [a] picture with my family tree and with the entire chapter was also fun.”

Cooper thinks that livestreaming the ritual is a great idea because it furthers the depth of their non-secrecy.

“Our Social Media Chair Josh Levy was able to livestream [the Initiation] for the first time in chapter history,” said Cooper. “We are already non-secret, but putting that ritual on our Facebook page only furthers that philosophy. In the future we will continue to livestream Initiation so that alumni, parents, other students and anyone in the world can see such an impactful ceremony.”

Ben Shrager, a member of the Phi Kappa Tau Fraternity, was present at both Rite I and Rite II. Being part of an organization with secret rituals, Shrager found the open initiation interesting, saying that it was strange to watch because he was used to initiation being such a private event.

“This was really a change in perspective,” Shrager said. “He is quite happy with secret rituals, but he thinks the existence of DU and its non-secret rituals makes him reflect on the reason secrets exist in his fraternity….I’ll always be biased and see more value in making ritual a closed, secret experience that builds brotherhood, but this was [a] really interesting perspective to receive and it got me thinking a lot about why we have secrets and what they mean to me and my chapter.”