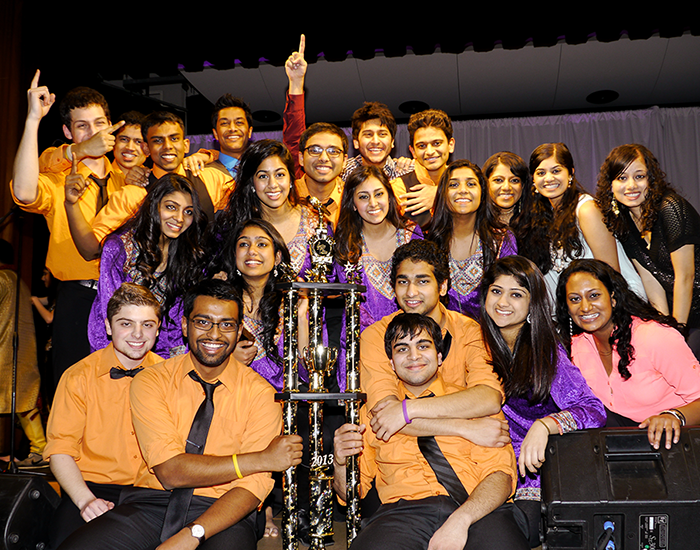 Dhamakapella pictured above, will be hosting the first ever Spring International on Apr 6.

The concert is historic for the group. “It’s the biggest event I think Dhamakapella’s ever had,” said freshman member Andrew Santin.

Held at Harkness Chapel, appetizers will be served at 6:30 p.m. followed by the much-anticipated performance at 7:00 p.m.

“Our goal is to pack as many people as possible, legally, into Harkness chapel,” said Dhamakapella music director Sahaana Sridhar.

After this week’s ticket sales, any student who happened to stroll by Dhamakapella’s ticket-selling table at Nord Hall is sure to know about the event. However, many students do not really know what Dhamakapella is, other than a singing group that has something to do with Indian culture.

The label “South Asian a capella” seems at first discriminative, but the group itself is incredibly diverse. “When CWRU sees ‘Dhamakapella,’ they see ‘that brown group,’” said Dhamakapella president Jeff Wexler. “We pride ourselves on diversity. It’s intimidating.”

“Especially when we win,” added Sridhar.

Dhamakapella has competed in two different competitions this past year: one in Philadelphia and one in Iowa. At the Philadephia competition, Dhamakapella competed against Michigan State University’s Spartan Sur, a group that will also be singing at the Spring Invitational tomorrow.

Other performing groups are Georgia Technical University’s Taal Tadka and CWRU’s own Speakeasy. Sridhar is especially excited about the new a capella groups that will be performing at the event.

“We’re the only South Asian a capella group CWRU has heard,” said Sridhar, who is very excited about bringing some new singing groups to CWRU’s campus. “The four teams performing are all fun and great to watch on stage.”

One aspect of Dhamakapella’s energetic shows that sets them apart from other groups is their choreography. With synchronized movement grooving along with Dhamakapella’s fused American and South Asian tunes, the show is sure to keep the audience entertained.

Members, who choose songs that they think the crowd will respond well to, arrange all the songs the group performs. Santin joked, “It’s a little tough for my Italian self to get a solo in all these Indian songs.”

Swaying in and out of different musical realms, the fused songs are meant to do more than just create a catchy piece for competitions and shows. “It’s about bridging two completely different cultures and mashing them together,” said Wexler.

Wexler joined Dhamakapella because of its uniqueness from other groups he had heard before. “It was the best decision in my life,” he mentioned.

Now president of the group, there is no question in Wexler’s dedication to Dhamakapella. “It’s like a big family,” he said.

Santin echoed the family-like qualities of the group. Earlier in his freshman year, Santin applied for many different singing groups on campus but decided to ultimately follow through with Dhamakapella. “I stuck with it because I formed such a connection with the group,” he said.

“I’ve heard fusion music and thought it would be fun,” said Sridhar, who joined the group for its unconventional tunes.

As far as leading the group goes, Sridhar believes she and Wexler are well suited to take on their positions as Music Director and President, respectively. “We were the people for the jobs,” she said.

The show tomorrow features several new mashups, including “Hips Don’t Lie/ Sheila Ki Jawani” and “ Pushing Me Away/ Woh Lamhe,” along with “a couple of other surprises,” according to Sridhar.

Dhamakapella will honor its supportive alumni by dedicating a song to graduated members, and any alumni in attendance will join in with the group to sing as well. The concert has taken on another meaning, becoming a reunion for the tightly knit singers.

Pre-sale tickets for undergraduates from the Nord table are $5 and $7 at the door. Graduate students can get in for $8, while the cost rises slightly for community members to $10.