Did the second season of “Euphoria” lose some of its charm—and is that a good thing? 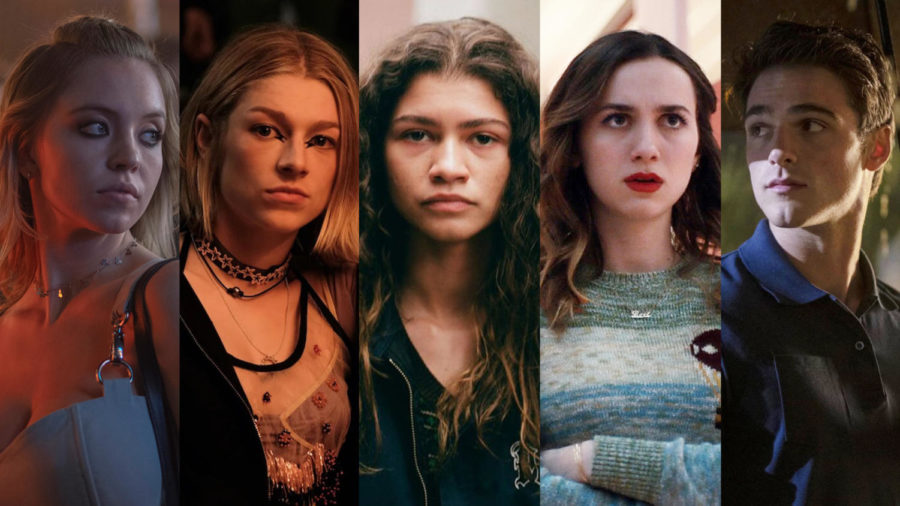 The first season of “Euphoria” quickly became a social media sensation. The show’s graphic depictions of sex and drug use, glittery purple lighting and star actress Zendaya made headlines and created controversy. Outfits and makeup from the show became trends quickly and the soundtrack blew up on Spotify. The world was obsessed, and “Euphoria” became synonymous with everything cool, stylish and Gen-Z adjacent. The show also garnered a lot of criticism due to its focus on addiction and substance abuse. But if the show has people emulating the characters’ personalities and fashion styles, the question becomes if we are supposed to emulate everything else that comes along with it.

Rue, the narrator, answers this question in the second episode of the first season. She narrates, “I know you’re not supposed to say it, but drugs are kinda cool…I mean, they’re cool before they wreck your skin and your life and your family.” Rue’s attempts to stay clean for the first time in years contrast with other characters such as Cassie and Maddy casually getting high at the town fair with no legal repercussions. Sometimes drugs are cool, with puffs of smoke adding to the intrigue of a house party, but sometimes they leave Rue screaming and crying at her dealer’s door upon his refusal to restock her supply. The first season ends with Rue relapsing, her girlfriend Jules leaving on a train for another city and psychotic Nate Jacobs getting off scot-free. It was anyone’s guess what would happen in the second season, with questions surrounding how the cast of characters could possibly return to their everyday lives after everything the first season had put them through.

But return they did. The second season, released three years after the first due to COVID-19 related filming delays, features most of the previous lead actors. Many elements from the first season have carried over, for better or for worse. The frequent nudity, trendy clothes and apparent lack of homework at the high school are all back in full swing. The aesthetic of the series, one of the more universally-praised choices of the first season, has even been given an update. Instead of multicolored lighting and bejeweled eye makeup, this season is shot on film, giving scenes a golden, washed-out look. Showrunner Sam Levinson says, “If season one was a house party at 2 a.m., season two should feel like 5 a.m.—way past the point at which everyone has gone home.” Levinson is certainly right. The continuation of “Euphoria” definitely trades in some of its glitz and glam for grit and realism, though not all fans are on board.

The biggest noticeable change in the second season is undoubtedly the portrayal of the majority of its main characters. Cassie, a previously sweet and naive girl, begins a relationship with her best friend’s ex-boyfriend and lies to her face about it. Kat’s only screen time also revolves around her boyfriend, whom she treats terribly. Jules completely betrays Rue when she cheats on her with their close friend, Elliot. And Rue transforms from her flawed but likable self into a person who screams terrible things at her mom, sister, mentor and her ex-girlfriend Jules. “You know, I have a lot of regrets in my life,” Rue whispers. “But I gotta tell you, Jules, meeting you, has got to be at the top of my fucking list.” Old Rue would never have dreamed of saying such a thing.

Everyone was far from saintly in the first season, but these characterization changes are extreme, even for “Euphoria.” In addition to Twitter—where users decry Sam Levinson as “public enemy number one”—the show has also been making mainstream news headlines. USA Today commented on the development of Cassie when they said that actress Sydney Sweeney “is especially wasted this season, with most of her screen time spent either screaming, crying or being ogled by the camera,” and that actress Barbie Ferreira, who portrays Kat,  “is similarly underused.” On a more serious note, the Drug Abuse Resistance Education program (DARE) has released a statement about the show overall. Part of it reads, HBO’s television drama “Euphoria,” “chooses to misguidedly glorify and erroneously depict high-school student drug use, addiction, anonymous sex, violence and other destructive behaviors as common and widespread in today’s world.” Clearly, the second season of “Euphoria” has not rectified its previous mistakes, and has somehow managed to stir up even more controversy than before.

But while some of the second season’s plot points and character developments feel out-of-character, Rue’s downward spiral comes as no surprise. Her shouting matches and teary breakdowns don’t stem from a bad breakup or friend’s betrayal (although technically these happen to her as well); they occur when her family discovers her drug use and takes away her supply. Rue’s behavior perfectly reflects the reality of addiction: the lying, manipulating, gaslighting, pleading when caught and the way she would do anything—even putting her own life at stake in a transaction with dealer Laurie—to keep herself high. As much as people think series creator Sam Levinson gets it wrong, he himself is a recovered addict who pulled from his own high school experience when writing the show, so he most likely knows what he’s talking about. Rue’s character arc this season finally shows how messy and heartbreaking addiction is. No lights and no glitter. The writers’ room has finally delivered what people have been asking for, but unfortunately, the messy nature of the show makes this hard for viewers to recognize.

The second season of “Euphoria” isn’t bad by any means. It’s just messy. The characters are hard to root for and their interactions can be hard to watch. But the one thing that seems right is Rue and her rocky, uphill road to recovery. So maybe the second season lost a little bit of its charm, its humor and its likeability. That’s not necessarily a bad thing if it finally shows opiate addiction in a more realistic light.