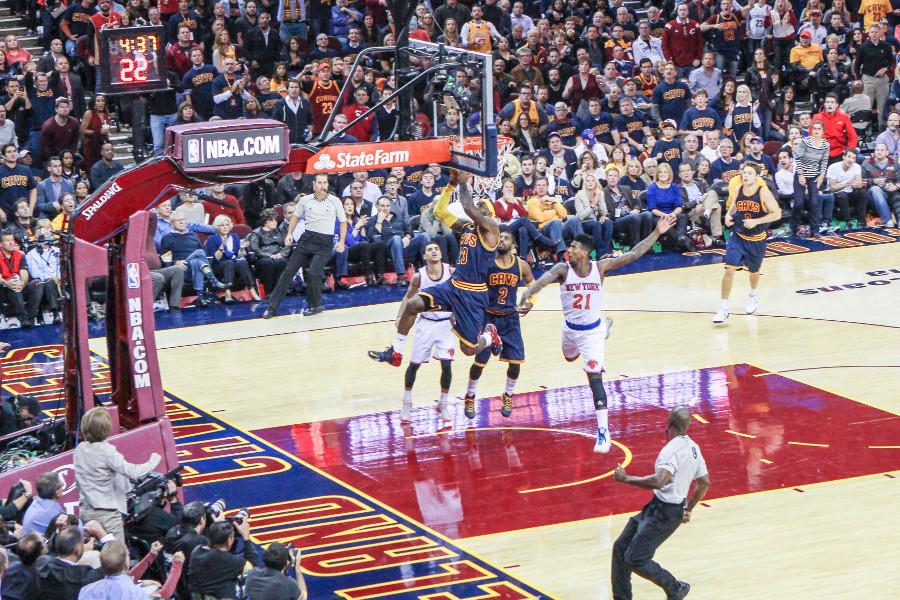 Lebron James drives the lane against the New York Knicks in the highly anticipated return of the king.

Three games into the season, and Cleveland’s greatest hope for a championship in professional sports stands at a paltry 1-2. After the latest defeat at the hands of the Portland Trailblazers (a blowout at that—101-82), the new-look Cleveland Cavaliers have kicked off the 2014/2015 season looking as if they aren’t even remotely close to being on the same page as a unit. LeBron James has said it himself: The team is going through a “process” and it could take a few months for them to get where they need to be.

Simply put, there is no quick fix to a team that hasn’t tasted success in four years. Not even an injection of supreme talent like James and Kevin Love merits an instant cure for the losing culture that has been established over the years here in Cleveland.

Like James said, it’s a process. Meaning there are certain tweaks and adjustments that may be made down the line in order to achieve the desired results.

One such tweak should be removing shooting guard Dion Waiters from the starting lineup and placing him in a bench role.

After having a strong and promising pre-season, the polarizing guard has thus far struggled to find his form—shooting a meager 30 percent from the field with averages of 8.3 ppg, 1.0 apg and 1.3 rpg. For as talented a player as his is, putting up numbers like these doesn’t reflect how effective Waiters can truly be.

Last year, Waiters came off the bench 46 games as opposed to starting just 24. When he came off the bench and didn’t play alongside Kyrie Irving, his stats had a noticeable uptick across the board. Roughly, he averaged about 4 more ppg, 0.5 more rpg and 1 more apg with a more efficient shooting percentage to match.

Waiters is a strong isolation-type player, armed with a lethal first step and an array of moves capable of shaking nearly any defender in his path. As such, he becomes more effective when he is surrounded with a weaker supporting cast—one that defers to him on the offensive end and allows him to be more of a primary scorer. Waiters refers to himself as an alpha dog, and that’s exactly what he would be for the second unit.

Not to mention the Cavaliers need a scoring punch off the bench, which is undoubtedly Waiters’ greatest talent as a basketball player.

The starting lineup for the Cavaliers have a few guys that can create their own shot and take over on the offensive end at any given time. James, Irving and Love each have this capability.

The bench, however, lacks such players. And the Cavs have struggled to find offense when their starters come out to rest. Matthew Dellavedova, Mike Miller and Shawn Marion aren’t guys that can be counted on to produce offense consistently on their own. They work better as complimentary pieces surrounding an offensive alpha dog.

And championship level teams understand the value of an exceptionally talented sixth man that bolsters the second unit.

Manu Ginobli, a well established star in the NBA, comes off the bench for the Spurs. Although he is more than capable of starting for any NBA team, his role as the bench star allows the Spurs to rest their starting lineup and have the luxury of consistent bench scoring. He leads the second unit, mitigating the drop off between when the starters are on the court and when the bench comes in.

That is why moving Waiters to the second unit would make a lot of sense. It’s also a position he’s both familiar and comfortable with, having strictly been a sixth man in college playing for Syracuse before coming to the NBA. The role simply suits him better.

It suits the Cavs better as well. Three games into the season, it’s still too early to determine what tweaks and changes will be made in the “process” down the line. But every game, every possession counts in the NBA, and moving Waiters to the bench may happen sooner rather than later if the Cavs hope to match its championship aspirations.