Discovering “The Shining” 40 years after release 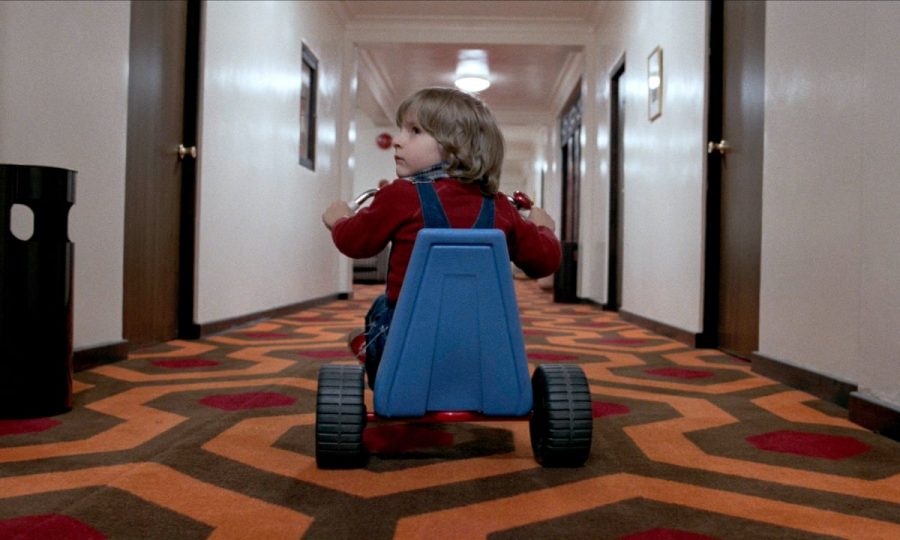 This iconic shot is just one part of why Stanley Kubrick's "The Shining" may be the best horror movie ever created.

Some films have so much critical acclaim and notoriety they are actively intimidating, almost to a point where it dissuades you from watching them. The reputation they have of being so perfect, so amazing, makes it feel like a task to watch the movie, like you should be taking notes while watching it. Movies like “Citizen Kane” or “On the Waterfront” or “Lawrence of Arabia” maintain statuses as cultural landmarks that have overridden conversation about them as films. Instead of movies, they become something you put on a list that you’ll get around to one day, when the time is right. For a long time, Stanley Kubrick’s 1980 film, “The Shining” was one of those movies for me.

I first heard of “The Shining” in third grade and learned that it had the reputation of being “the scariest movie of all time” according to my friend, and that he couldn’t sleep for a week after seeing it. It was probably a good thing that 10-year-old me didn’t want to see the movie at the time, but that label stuck in my mind for a long time and was only reinforced by everything I continued to hear about it. Horror movie rankings continually place it at the top and moments like Jack Nicholson yelling “Here’s Johnny!” are continually referenced in other pieces of media.  Due to the movie being directed by one of the greatest directors of all time, the label of being a “Kubrick Film,” has led it to becoming one of those “classics” that seem more like chores to get around to. I’m not averse to horror movies or Kubrick films. In fact, I quite enjoy both horror films, like “Halloween” and “The Thing,” and Kubrick films, like “2001: A Space Odyssey” and “Dr. Strangelove or: How I Learned to Stop Worrying and Love the Bomb.” However, the idea of watching “the best” of all horror films and the most well known Kubrick film made me slightly nervous. What if it was disappointing? What if I just didn’t “get it?” Questions like that allowed me to psychologically put the film on the back burner for years.

This Halloween season, however, I decided to finally go after my white whale and watch “The Shining.” I didn’t really know the plot of the film so everything other than the most iconic images that have seeped into the cultural primordial soup was unknown to me. That was undoubtedly for the best, as this film gripped me from the opening shot.

A car drives along a winding mountain road, just far away enough to seem so small, as it is engulfed in the forest and plains. In the background, a disconcerting musical track plays, with a constant rumbling bass, seemingly random strings twanging, primeval chanting and a solemn melody akin to a funeral march. The camera flies through the sky almost like an evil spirit following the car, noticing them before they arrived. Everything combines to give you one feeling: something isn’t right.

The entire film is built around giving the audience that sense of unease. The eerie soundtrack sometimes plays when nothing is going on, or doesn’t play when something is, making it an unreliable aid to the audience. The way scenes are framed constantly make the hotel setting seem larger and yet more claustrophobic than it has any right to be, with camera observations from the eye level of the characters in long tracking shots that establish the environment. Supernatural things happen, or do they really? Can we trust these characters? What does it all really mean? “The Shining” makes the audience always walk on eggshells until everything just starts cracking, no matter what’s done.

A lot of this can be attributed to the performance of Jack Nicholson, who plays main character Jack Torrance, a writer who has been hired to oversee the Overlook Hotel in the Colorado Rockies during the winter while everyone else is away. He and his family are isolated in the hotel as the snow piles up around the hotel and traps them, allowing them to go all mad together. Jack Torrance epitomizes the uneasy feeling of the movie, always seeming just slightly off. You want to scream at the characters not to upset him, not to talk over him, not to interrupt him. The film encapsulates the feelings of being with an abuser in the home and allows insanity and the supernatural to expand on that theme.

The feeling of walking on eggshells isn’t just related to Jack, but instead, pervades throughout the entire film as Kurbrick exploits the unexplainable fears and tendencies that human psychology are built on. As the psychic child Danny plays with his truck toy, a ball rolls up to him. He looks up, and there isn’t anyone there who could’ve rolled it. He goes around the hotel hallways on his little tricycle, with the camera directly tracking behind him. Through his perspective, the audience goes into a trance, looking at the carpet, looking at the walls, with the eerie music staying constant until the ghosts of two little girls appear right as the camera turns the corner. Images flash of elevators filled with blood, girls hacked into little pieces and Danny covering his eyes.

Towards the end, events keep occurring that beg explanation. What’s the nature of the hotel? Are there really ghosts? Are they just going mad? Is there a reliable narrator? That’s all well and good, but the feeling that I was left with as the credits rolled is that we shouldn’t try to comprehend some things. Some things are just unknowable and beyond explanation, and that’s the nature of this universe. Some things humans are just not supposed to be understood. It’s the fear of the unknown and the unknowable that makes us human.

Even if we can always constantly theorize what “The Shining” really means, whether it’s a metaphor for the genocide of the indegenous Americans, or alcoholic abusers––some things are just beyond comprehension, and intentionally so. Horror movies bring humans down from the top of the food chain to lesser beings, allowing us to feel fear again, and nothing does this better than “The Shining.” In the idolizing and pedestal building that has been done for the film, people have forgotten that it is––at the end of the day––an extremely effective film that makes you feel small and weak in the universe. The best horror film indeed.