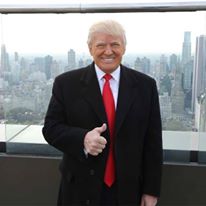 At the corner of East 56th Street and Fifth Avenue in the middle of Manhattan stands an impressive feat of architecture, a 58-story elegant skyscraper labeled in large metallic letters “Trump Tower.” I was familiar with the building, and because of a show called “The Apprentice.” I was familiar with its owner, but beyond that I knew nothing about Donald Trump. However, in the past few weeks, Trump has garnered media attention and my own with his rather flamboyant presidential campaign. To the surprise of many, he continues to poll ahead of his competition.

At press time, a poll in the first primary state, New Hampshire, had Trump polling at 28 percent, with the next closest candidate, John Kasich, at nearly 13 percent. This is just one of many polls taken that shows Trump out in front of the other Republican primary candidates. One of the reasons it is so shocking to see Trump in the lead is because he is a departure from what one might consider a textbook politician.

He has a distinct lack of political correctness when speaking and has been criticized on multiple occasions because of it. However, his outlandish behavior and rhetoric seem to paint him apart from the other candidates and serve to emphasize that he is not politics as usual, at least in the eyes of Republican voters. He touts his tough businessman image and his long resume as proof that he will be an effective leader and negotiator when dealing with other economic powers.

Yet some of his plans seem detached from reality; he has repeatedly said that he will take on leadership in China, the Middle East and Mexico to renegotiate what he calls bad deals produced by incompetent leadership that have diminished America’s stature in the world economy. For better or for worse, he seems to want to bring everyone to the table and put them to some hard decisions in an attempt to boost America’s economic standing.

So why is someone so polarizing out in front of more well-established politicians? My initial reaction was to ignore Trump and his rhetoric and label his behavior as a publicity stunt, but his success has forced me to reevaluate my position. Trump’s success seems to be indicative of a growing consensus among the American public: The current political leadership has failed to adequately serve and thus they must look to people outside of the established framework for solutions. Disillusioned by politics and politicians, approval rates for Congress last year were an abysmal 15 percent, only one percent above the historic low. Gridlock in Congress, interest group politics, and large deficits are viewed as indicators of leadership that has failed to properly do what they were elected for.

However, even if Trump were to get elected and longstanding politicians like Hillary Clinton and Jeb Bush lost, I doubt people would see the changes they desire. Not because of Trump, mind you, rather because of the nature of the two-party American system. Trump has flopped on multiple issues, as he was once a Democrat, and from a political standpoint, this makes perfect sense. His beliefs have to align with what the Republican party wants. The same thing happens in Congress. If you are going to get on a Republican or Democratic ticket, chances are you won’t try to deviate from your party’s stances on issues—I am skeptical if even someone as unique as Mr. Trump can alter the party’s agenda.

Perhaps what this country needs is the advent of a third party, and not just independents that siphon votes from one side or the other. During the first primetime debate, Trump was the only candidate who raised his hand to refuse to take a pledge that he would not run as an independent. Whether or not that still remains true, I can’t help but feel like until that becomes a legitimate option, people will continue to be disaffected by the status quo, two-party system and the political process will continue to stagnate.

Chandler Holcomb is a senior at Case Western Reserve University.