Drawn with flying colors: British masterworks-on-paper at the Cleveland Museum of Art 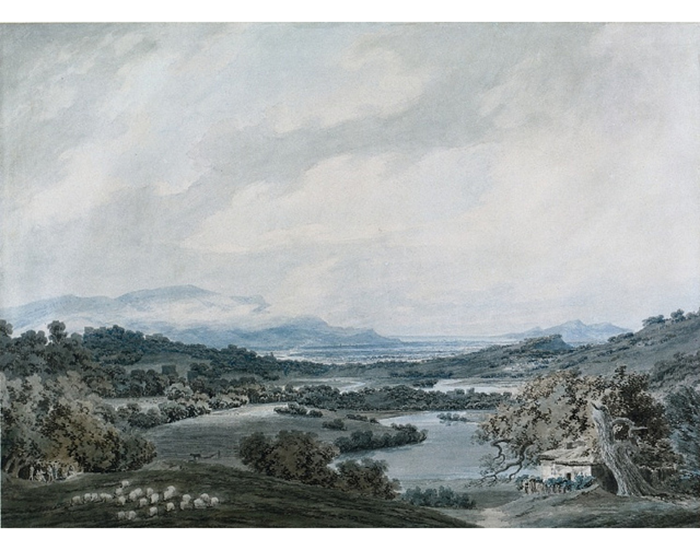 To this author (and who am I to disagree with the author?), England’s poetic and historical memory seems to course ineluctably through the oeuvre of one, pantheonized, stand-alone colossus: Jackson Mallord William Turner (1775-1851). The breadth and beauty of the Cleveland Museum of Art’s exhibition of mainly in-house, must-see British drawings, on view until May 26, persuades that Turner both stands alone and among many Georgian, Victorian, and Edwardian compatriots of astonishing, if less renowned, artistic virtuosity.

This approach lets the art speak for itself, but may also leave aspiring aesthetes-in-the-know craving context.

I aim to flesh out what is arguably the exhibit’s heart: the interdependent development in England of the genre of landscape, from background setting to center stage, and the medium of watercolor, from washed to painted pigment. Landscape watercolors comprise an unmistakably British, Golden Age corpus that flourished from about 1750 to 1850 despite most inauspicious beginnings.

When London’s Royal Academy opened in 1768, its president, Joshua Reynolds, set in painting’s hierarchy three types of landscape: “Historic,” “Pastoral” and “Topographic.” Like portraiture and still life, topography’s detailed exactitude was disdained as mere transcription of the natural world, the lowly bailiwick of the workaday draughtsman, not artist. Furthermore, the R.A. prohibited entry to topographic practitioners, i.e., watercolorists.

The R.A. stated its members were to be “Painters, Sculptors and Architects,” which at the time did not include watercolorists. They had early mastered the difficult application of seamlessly gradated, muted, pre-engraving watercolor washes over pencil underdrawings and beneath pen-and-ink details; still, the R.A. viewed such work as drawing, an adjunct to painting and not, like oils-on-canvas, painting itself. This attitude long continued, regardless of watercolorists’ bold painterly initiatives.

The first vogue, given the discoveries of Herculaneum in 1738 and Pompeii in 1748, was Antiquarianism. In its wake, archaeologically precise renderings of ancient buildings became vehicles for luminous, sometimes louring atmospherics. The second vogue, codified by the minor artist Revered William Gilpin in the 1770s and the landscape designer Sir Uvedale Price in the 1790s, was the Picturesque. Distinct from the Burkean sublime, rooted in awe and terror, and from the Burkean beautiful, rooted in comfort and love, the picturesque provokes curiosity and surprise.

In 1772, the leading picturesque painter John Robert Cozens (1752-97) joined the wealthy, wildly extravagant landowner William Beckford from Paris to Naples via the Alps. Rapt by mountains, as was his painter-father Alexander, Cozens poetically bathes hills, valleys and meadows with his signature subdued grays, greens, and blues in “Italianate Landscape” (1790-92). Less historical documentary or topographical accuracy than fanciful haze, the picture adopts the Claudean framing device of a large foreground tree, which dwarfs a cottage suggesting human presence.

Abbott’s granite monoliths tower over cows in an austere composition of pure watercolor. This sensibility radically departs from that of lush, painterly watercolors once varnished to mimic oil, such as “A Herdsman with Three Cows by an Upland Pool” (mid 1780s) by portraitist Thomas Gainsborough (1727-88). Proud of their pastoral countryside, British artists identified ever more patriotically with their homeland’s pelagic and fluvial waters.

Active during the French Revolution and Napoleonic Wars, the marine painter Samuel Atkins (c. 1790-1805) exalts England’s highest chalk sea cliffs and globe-dominating navy in “Fleet off the Coast, Beachy Head” (1790-1805). Its ships in splendid full-sail, reminding of British command in battle, colonizing and trade, find counterpoint in the simple shore-skimming skiff of “On the Thames” (1827-29) by Varley student David Cox (1783-1849). Symbolizing national pride, the river’s muscular ebbs and flows distill into gentle reflections in soft-edged, flowing hues that glisten, in part, from being scraped to reveal white paper beneath.

In his later years, Cox lifts pigment less completely amid deeper shades worked wet-into-wet on rough brown paper, as in “Bolton Abbey” (1840s-1857). That title notwithstanding, the twelfth-century ruin serves not as the painting’s subject but as a prop for its subject: landscape. Overrun by vegetation at viewer’s left, the recessed priory’s columns appear to morph at viewer’s right into trunks of yellow-leafed trees as the arcade melts into a sweeping crepuscular valley. Exemplifying the Romantic trope of decay engendering natural growth, the ecclesiastical turns botanical or, as in topographies by Samuel Prout (1783-1852), invokes it.

Prout was friend to Cotman; teacher to Gainsborough, Constable and Turner; and watercolorist to George IV and then to Queen Victoria. In 1819, Prout visited Europe; there, his fascination with aged cityscapes cemented his destiny as a master architectural watercolorist. In his grey-and-brown washed “Interior of a Cathedral” (1820s), worked with point of brush, white gouache glints on foliated capitals and tree-trunk-like columns before cool, shaded vaults. Despite objectively meticulous stonework, the whole conjures a subjective sylvan paradise. No wonder that in his ¬¬treatise “The Stones of Venice” (1851), Prout’s art-critic protégé, John Ruskin, praised the Gothic’s restless organic vitality, its “strange ‘disquietude.’”

Ruskin’s impassioned antiquarianism excluded Greek art, which he thought monotonous, “dead, and dark.” Nevertheless, excavations triggered a vogue for the classical, which, like the medieval, inspired Ozymandian meditations on the eternal natural world and ephemeral human glory. In this connection, nothing compared with the fall of imperial Rome. In “Temple of Vesta and Falls at Tivoli” (1859) by William Callow (1812-1908), large lichen-rich boulders and long rushing torrents capture the vigor absent in distant, deteriorated remains. In “Arch of Titus and the Coliseum, Rome” (1846) by Thomas Hartley Cromek (1809-1873), the ampitheater’s collapsed outer wall similarly conveys man’s transience.

Temporality refused Turner, or he it. Early in his career, when Napoleonic conflicts forestalled his compulsive Continental peregrinations, Turner copied Cozens’s monochromes – like several artists mentioned here – in the Academy of Dr. Thomas Monro (1759-1833). An active London patron who invited artists to study his private collection, Monro through his home-based Academy spurred the genesis of London sketching groups and provincial watercolor societies. These offered especially welcome instruction to artists unaffiliated with the R.A., and they encouraged imagination – soul-saving imagination given the industrial revolution’s age of the Gradgrinds.

Turner had imagination in spades. In his late watercolor “Flüelen, from the Lake of Lucerne” (1845), he summons his roots in R.A.-scorned topographical recording and whips it into the kind of sublime, visionary ode to multi-colored air that made him, at age twenty-five, the R.A.’s youngest full-blown Academician. White pigment adds the richness of oil but supports ethereally translucent watercolor in yellow, blue and mauve. Yet all is not sweetness and light. Its paper animated with scratch-away, Turner’s hallmark sky vortex presents potential for catastrophe, as in CMA’s Turner oil, “The Burning of the Houses of Lords and Commons” (1835).

The abstract painter Sean Scully observed, “The only real thing you can do in the end with a Turner is submit to its beauty.” The same may be said of CMA’s show.