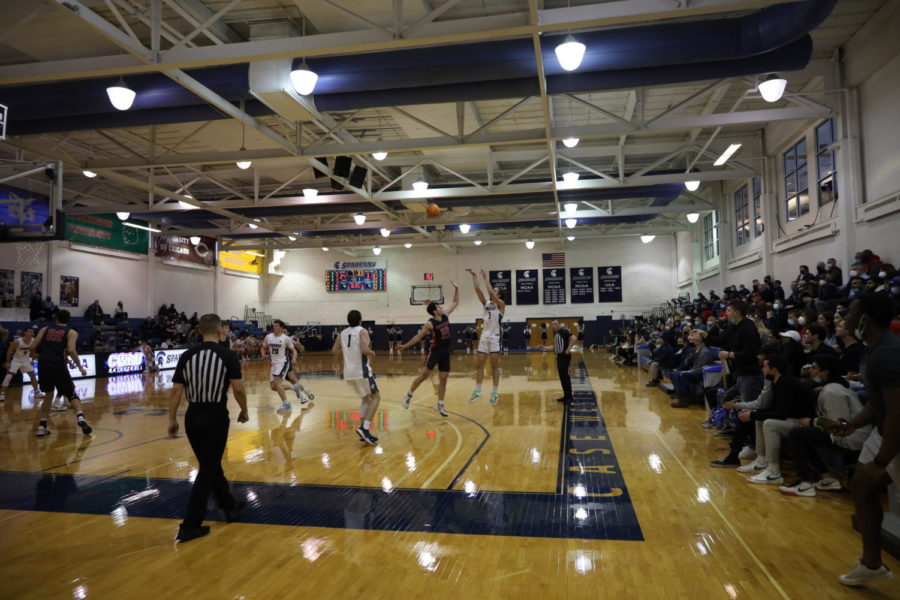 Second-year forward Hunter Drenth (#3) shoots a 3-pointer in the recent home game against CMU in a string of victories that ultimately led to CWRU's first postseason win.

After only having a scrimmage match in spring 2021, the Case Western Reserve University men’s basketball team made it all the way to the Round of 16 in the 2022 NCAA Division III Championship, exceeding expectations with their record-shattering season.

The first basket against CMU represented yet another milestone. Graduate guard Griffin Kornaker broke the school record for assists in a season after setting up fourth-year forward Ryan Newton for a 3-pointer. Kornaker finished the game with 11 assists–his fifth game this season with double digit assists–on top of 7 points, 6 rebounds and 3 steals. For the season, Kornaker tallied 156 total assists, surpassing Jim Fox’s 25-year record of 145 assists.

The rest of the first half was forgettable. The Spartans’ abysmal defense and lackluster offense resulted in a 45-35 lead in favor of the Tartans, who shot 50.0% from the field.

The Tartans pushed their lead to 12 after a jump hook in the paint to open the second half. Third-year forward Cole Frilling quickly responded with back-to-back 3-pointers, initiating an 11 point run. The Tartans went on a run of their own to take a 6-point lead, but a 3-point play and layup by Newton put the Spartans up 58-54.

Third-year guard Robert Faller and Frilling took over the game and scored 19 of the Spartans’ next 23 points, including five combined made 3-point shots. Facing a 81-64 deficit with four minutes left, CMU desperately tried to close the gap. They mustered up a 10-2 run with two minutes remaining but it was too little too late. The Spartans polished their lead with some free throws and closed out CMU 92-83.

Frilling led the team with 23 points on an impressive 61.5% from the field to go along with 4 rebounds, 2 steals and a block off the bench. Graduate guard Mitch Prendergast contributed an additional 21 points on 7-of-13 from the field while Newton added 16 points. The Spartans finished the game shooting 46.3% from the field and 46.4% from beyond the arc thanks to their explosive second half, where they shot 59.4% overall and an elite 69.2% from 3-point land. CWRU notably had the advantage in assists (20-13) and bench points (34-15).

“We have guys sitting on our bench here that work hard every day,” said Coach Todd McGuinness about the team’s effort this season. “It’s about our whole program. We have very good players.”

The Spartans also celebrated “Senior Day” prior to their victory over CMU to honor graduating players Newton, Faller, Kornaker, Prendergast and graduate forward Brian Hines for their remarkable careers with CWRU men’s basketball.

CWRU rode their regular season momentum into the first round of the playoffs. On March 4, a go-ahead 3-pointer by Newton with 6.6 seconds remaining in overtime secured the 91-87 win over the University of Dubuque to advance to the second round. The victory marked the first postseason win in CWRU program history.

CWRU opened with a disappointing first half and shot just 34.3% from the field, which allowed Dubuque to take an 11-point lead at the half. Yet for the second straight game, CWRU rallied back from a double-digit deficit.

Dubuque’s lead grew to 13 with 13 minutes left in regulation, but CWRU struck back. Halfway through the second half, Newton capped off a 9-0 run with a dunk, cutting the deficit to 4 points. Both teams went back and forth until a layup from Faller followed by free throws made by Cole Frilling set the score at 81-79 with 1:26 left. Hines and Frilling blocked two consecutive shots and ultimately set up Newton to hit the game-tying free throws with 12.8 seconds left. Dubuque had the chance to take the win with a quick jumper, but Frilling blocked the shot, sending the game into overtime.

Frilling opened the overtime period with a layup, but Dubuque responded with a 3-pointer and two free throws to take the 87-85 lead. The Spartan’s stellar defense held Dubuque scoreless for the rest of the game. Newton hit a jump shot to tie the game at 87. On the next possession, second-year guard Luke Thorburn snatched a clutch offensive rebound and dished it to Newton for the dagger 3 to finish off the game 91-87.

In a post-game press conference, Coach McGuinness reminisced over Newton’s performances throughout his career.

“Ryan [Newton] has a history [of clutch performances]. We beat Carnegie Mellon this year and he tipped it in at the buzzer to win the game. [Against] Brandeis three years ago, he hit a half-courter to send it into overtime. Whenever it comes down to the stretch, I let him shoot. I just think he is going to make it.”

This victory was truly a team effort, with six players recording double-digit points. Frilling led the team with 19 points, 13 of which came in the second half. Newton led the bench with 17 points, including five clutch points down the stretch in overtime. CWRU led their opponents in field goal percentage (44.3-42.3%), rebounds (46-44) and assists (16-10), in addition to recording the greatest number of blocks in a game in 20 years (15).

The men’s team continued their championship pursuit against third-ranked defending champion University of Wisconsin-Oshkosh on March 5. Prendergast opened up the scoring with a three-pointer, but the Titans went on a 12-2 run to take the 12-5 lead. CWRU struggled from the three-point line, shooting 1-for-11 in the first half while also committing 8 turnovers. The Titans took advantage of the Spartans’ miscues and scored 6 straight points to finish off the half leading 41-27.

The Spartans quickly found themselves facing a 16-point deficit to open the second half. However, second-year forward Hunter Drenth and Newton answered the call and took over for the next eight minutes. Newton kickstarted the barrage with a layup. Drenth followed with a pair of free throws and a three-point jumper to trim the gap to single digits, 49-40. The duo made four straight layups and cut the Titans’ lead to 51-48. For the final nine minutes, the Titans and the Spartans went back and forth without letting either team get a solid lead.

With just 30 seconds left, the Titans went up 74-70 after nailing two free throws. Prendergast came to the rescue on the ensuing possession and drew a foul on a 3-point attempt. The season was on the line but Prendergast didn’t let the moment get to him. He swished all three attempts to bring the Spartans within one point. CWRU pressed full court for the final 24 seconds and forced a turnover. Newton saw an opportunity and shot a layup but missed. Frilling was in the right place at the right time and collected the offensive board for the go-ahead basket, putting the Spartans back on top 75-74.

CWRU played nine seconds of stellar defense, with Prendergast coming up with a steal and being immediately fouled by the Titans. Prendergast hit two more free throws to seal the comeback victory for the Spartans 77-74, advancing CWRU to the sectional semifinals.

“Crazy man, we … have no idea what just happened,” said Newton about the CWRU locker room atmosphere in a post-game interview. “Down 14 at halftime, that’s honestly where we’re pretty comfortable at. We come out, we have a pretty good sense of urgency and then we just chip away, chip away … Just … a lot of energy.”

When asked about his dominant play on the floor, Prendergast pointed to the team’s chemistry and playmaking synergy.

“[It’s] the confidence we have in each other … You can’t double when you have five scorers on the floor, and when Ryan [Newton]’s scoring like he does and giving that energy and we get offensive rebounds like we do, we’re a really good team.”

Strength in numbers was key for the Spartans as the bench, led by Newton and Drenth, poured in 40 of the team’s 77 points. Newton notched 21 points on 9-of-13 shooting to go with 9 rebounds and 2 blocks while Drenth tallied 19 points on 8-of-10 shooting with 5 rebounds. Prendergast added 15 points, 2 steals and 2 blocks.

The Spartans returned home and set their eyes on the sectional semifinal matchup against the sixth-ranked University of Mary Hardin-Baylor. The historical game tipped off in front of a sold-out crowd in Horsburgh Gymnasium on March 11.

The two teams settled into a back-and-forth game, with neither side letting the other take a double-digit lead. With 1:37 remaining in the first half, Newton flipped in a layup to give the Spartans the 39-31 lead. UMHB responded with 6 straight points and cut their deficit to 2, but Drenth slipped in a quick layup just as the half expired to put the Spartans up 41-37 going into the break.

CWRU’s fiery offense propelled them to a 49-37 lead at the start of the second half. The Crusaders never lost confidence and slowly clawed back in the game, eventually taking the 62-61 lead with 8:24 left.

The Spartans remained in a tight match, with the lead changing hands eight times until the final five seconds. Prendergast went to the foul line and split the free throws, giving the Spartans a 75-73 advantage. On the final possession, UMHB hit a pair of clutch free throws to tie the score and send the game into overtime.

Prendergast scored 5 points to put the Spartans ahead 84-82 but the team simply ran out of gas. Suffering multiple defensive breakdowns, the Spartans let the Crusaders go on a 7-0 run to close out the game 89-84.

Though the loss marked the end of CWRU’s postseason run, it also concluded the best season in program history with a 20-7 overall record and a program-best No. 2 ranking in the conference standings.

Prendergast delivered a record-setting performance, tying his career-high with 32 points on 9-of-18 shooting and setting the single-game program record with eight three-pointers. Additionally, Prendergast’s season will go down in the CWRU record books as one of the best individual performances ever, as he set the program record in free throw percentage (93.2%) and three-pointers made in a season (78). He was named the UAA Athlete of the Week for the second time in his career for his stellar performance in the sectional semifinal.

When discussing the team’s camaraderie and underdog mentality through the season, Prendergast said, “I think that this whole year, we’ve just come so close as a team and even off the floor. From the beginning, we knew that we could do this [but] we got picked in the middle of the conference. Nobody really believed in us and we proved them wrong.”

The NCAA DIII Championship semifinals are slated for March 18 at Fort Wayne, Indiana. Elmhurst University, who defeated UMHB in the sectional finals, will face Wabash College while Marietta College will battle against Randolph-Macon College to make it out of the Final Four into the championship game. The tournament finale will take place on March 19 at 6:00 pm.