Drew Goddard’s homage to Tarantino a masterpiece itself 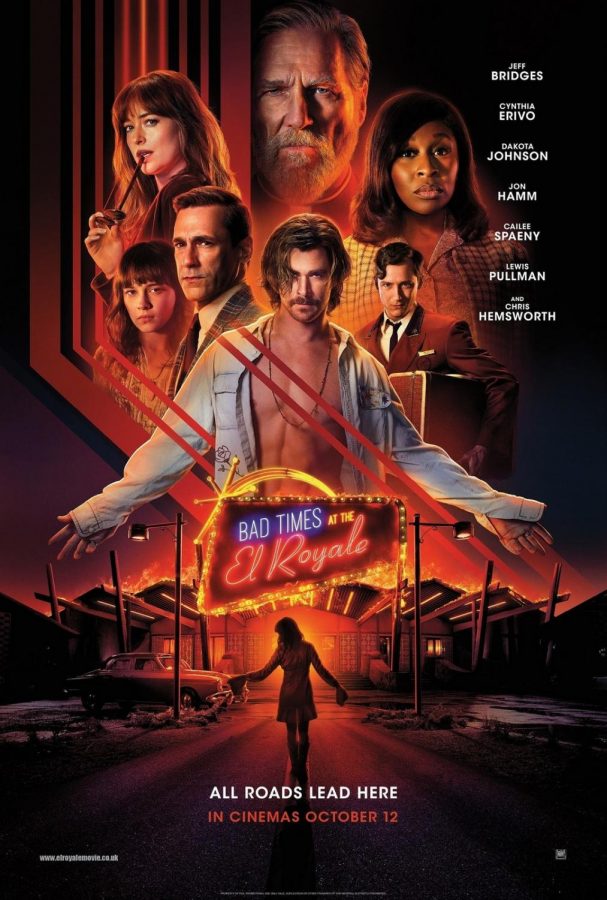 Writer and director Drew Goddard has quietly made a name for himself over the years, with his work on TV shows like “Alias” and “Lost” before heading into filmmaking with the screenplay to “Cloverfield.” Since then, he has brought originality to everything he writes and directs, especially with his impressive directorial debut, “The Cabin in the Woods” and his Academy Award-nominated screenplay “The Martian.” Now, Goddard wishes to tackle something akin to a Quentin Tarantino film with “Bad Times at the El Royale” and, for the most part, he soars.

The film follows a set of mysterious individuals who arrive at a once-famous, now rundown luxury hotel, the titular El Royale Hotel. The hotel is situated on the border between California and Nevada and includes rooms designated by which state they lie on, an entire casino and a full bar all within the main hotel complex.

The mysterious guests include Father Daniel Flynn (Jeff Bridges) who is staying to avoid upcoming bad weather, Laramie Seymour Sullivan (Jon Hamm), a vacuum salesman wishing to sell everyone appliances, Emily Summerspring (Dakota Johnson), a strange and hostile hippie woman harboring a secret and Darlene Sweet (Cynthia Erivo), a singer down on her luck wishing to get to Reno quickly for a gig.

Unknowingly, they are under the watchful eye of the hotel concierge, Miles Miller (Lewis Pullman), who has been tasked by “management” to always oversee any and all patrons staying at the hotel for insidious intentions.  However, as night comes, secrets and realities are uncovered as the hotel guests realize each other’s dark natures and true intentions when the prospects of wealth and murder arise. The tension is heightened by the approach of a mysterious cult leader (Chris Hemsworth), who wishes to take back what is his from one of them.

“Bad Times at the El Royale” is an incredibly stylish endeavor highlighted with impressive cinematography by Seamus McGarvey and deft, assured direction from Goddard. They set up picturesque shots and long takes to highlight the hotel, a character in its own right. The fantastic dialogue and acting from all the major actors, especially Bridges, Erivo and Pullman, give weight to the characters’ decisions.

Hamm was underutilized in his role and also given a less refined storyline. The use of chapters for storytelling was a neat touch to introduce every character properly and amp up the stakes, although the inclusion of cult leader Billy Lee’s role in the hotel situation should have occurred sooner. The film may be a test of patience for some, due to a lull in the film’s middle and stretches of just music and singing, although the music choices were perfect for this film.

Overall, the film manages to be a great love letter to Tarantino’s wonderfully violent and resonant work, while exercising proper restraint so the dialogue, directing and acting shine through the more self-glorifying aspects of Tarantino’s work. While the film’s plot is jumbled, everything around the plot manages to outshine this element for the better.