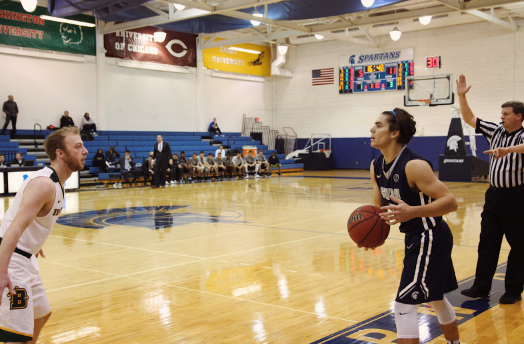 Javier Alvarez hurriedly searches for an open teammate to inbound the ball to.

The Case Western Reserve University men’s basketball team went 1-2 in their last three games, defeating Trinity University while losing to the College at Brockport, State University of New York (SUNY Brockport) and Denison University. The Spartans played in the Stephanie Tubbs Jones Tournament in their first two contests, falling to SUNY Brockport in the championship game. CWRU fell to 1-3 on the young season.

In their first game, the Spartans edged Trinity 72-71 for the Spartans’ first victory of the season. The game was a back-and-forth affair, the result decided with only eight seconds left to play. Third-year forward Eric Black tipped in a rebound from a missed shot to secure the win. The ensuing shot attempted by Trinity went wide of the rim as time expired.

Daniel Chambers, a first-year forward, led all Spartans with 18 points in his second collegiate game. Black finished the game with a career-high 14 rebounds.

In the tournament championship game, it was a tale of two halves for the Spartans. The first half featured an intense game that saw ties throughout, with neither team able to gain a significant edge for too long. The game finally opened up right at the end of the half when the Golden Eagles went on a 10-1 run to enter the break up 43-36.

In the second half, the Spartans were unable to get anything going, continually turning the ball over as Brockport St. would eventually push their lead to 20 points. CWRU committed 23 turnovers in the contest, the most they have had so far this season. When asked about what caused some of the lapses in play, new Head Coach Todd McGuinness said, “Brockport pressed the entire game and plays at a fast pace. We had a few turnovers that were unforced that hurt us.”

The Spartans went on the road for the first time all season when they visited Denison. The game against Denison was also tightly contested and saw the visitors take the lead entering the half, but ultimately fall by a score of 85-75.

Chambers once again delivered as the first-year student poured in 19 points to lead all Spartan players. When asked about his young guard’s performance, McGuinness said, “He is a natural scorer that is getting more comfortable with the offense and speed of the college game.”

An 8-0 run by the Spartans to end the first half helped CWRU carry a 44-41 lead into the break. The Spartans made 12 of 13 free throw attempts in the half and out-rebounded Denison 16-9.  Once the second half started, however, the Big Red took the lead and began to pull away. A five-point Denison advantage with just over nine minutes left in the contest would prove to be the closest the Spartans would get to reclaiming the lead.

The Spartans next play Dec. 3 against the Adrian College Bulldogs and don’t return to Horsburgh Gymnasium until Dec. 29 for the Bill Sudeck Holiday Tournament.