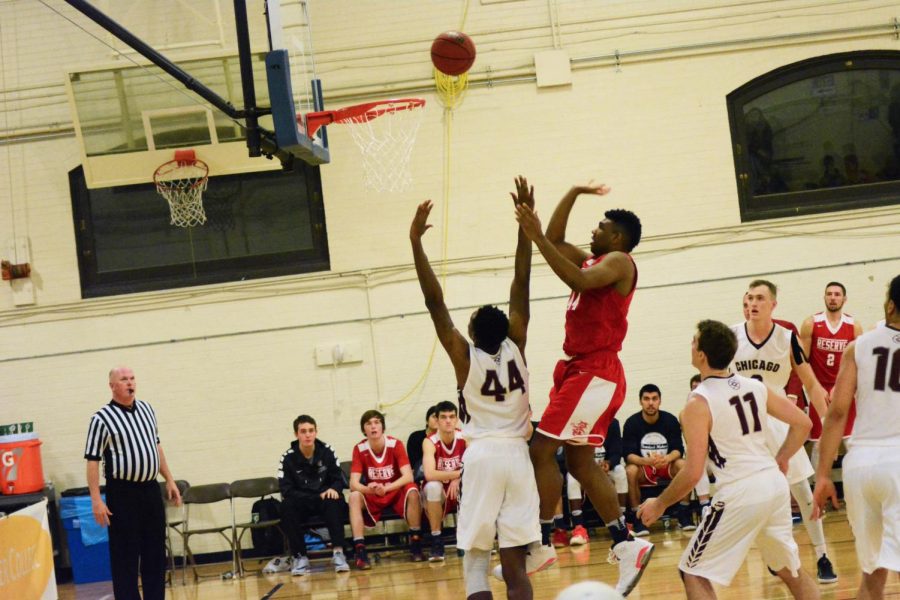 Fourth-year forward T.J. Duckett had a career day in the Spartans first win of the season.

Duckett and second-year guard Sam Hansen led the Spartans in the first half, scoring 29 of the team’s 39 points, with Duckett contributing 17. Hansen contributed the most during a 19-9 run, scoring 12 of his game total 17 points in the last six minutes of the first half. The run brought CWRU from down 13 to be only down by three going into the half.

Starting the second half, after Mount St. Joseph scored, Duckett hit three consecutive layups and second-year returning forward Michael Hollis hit a three pointer to extend CWRU’s lead to 48-44. The team didn’t look back after a 14-3 run to grow a 68-55 lead.

The Lions attempted to make a vigorous comeback in the last four minutes of the game, but the Spartans were able to hold it off with a three point play by Duckett and free throws by second-year returning guard Monty Khela and Duckett.

Head Coach Todd McGuinness said, “It was a good win, we played well. I’m happy for the players. They have worked hard.”

To end the Tip-Off Classic, CWRU faced off against Ohio Northern University on Sunday, Nov. 26.

The team was competitive early, as they fell behind 23-12 but fought back with a 7-0 run to bring the game within four. Hansen capped the run with a three pointer, part of his nine point performance.

However, the Polar Bears were too much to handle for the Spartans, as they went on a 15-0 run to close the first half with a 44-26 lead.

Ohio Northern extended the lead in the second half and never looked back, as CWRU dropped the game 87-48. First-year rookie guard Antonio Ionadi led the team with 10 points.

On Tuesday, Nov. 21, the Spartans faced off in a back-and-forth matchup against Denison University, which featured 12 lead changes and five ties.

The first half was close, with the teams trading baskets. CWRU took its first significant lead in the half, 22-15, on back-to-back three pointers from first-year rookie guard Ignas Masiulionis, who led the team with 18 points on 7-for-15 shooting and 4-for-10 from beyond the arc.

The Big Red came out of the gates in the second half and took a quick 34-28 lead. However, the Spartans went on a 13-2 run capped by a Khela three pointer to regain the lead by five, 41-36.

However, the Big Red never gave up and scored the next 15 points, took the lead, and never looked back.

Masiulionis attempted to keep the Spartans close, hitting three consecutive layups to bring CWRU by one at 63-62. He also hit a three with 15 seconds left in the game to make it a one-possession game.

However, the team was unable to pull through as Denison converted four straight free throws and won 74-69.

The team finished the week with a win and two losses, bringing their overall record to 1-4.

The team will look to close out the fall semester with three games. The first is against Adrian College at home on Saturday, Dec. 2 at 3 p.m., the second at Thiel College on Wednesday, Dec. 6 and the last at Kalamazoo College on Saturday, Dec. 9. Over winter break, the Spartans will host the Bill Sudeck Holiday Tournament on Dec. 29 and 30.

“We are all working hard. Our team has a great work ethic,” said Duckett. “People have been stepping up to the challenges given to them and doing a good job of making the most of their opportunities.”